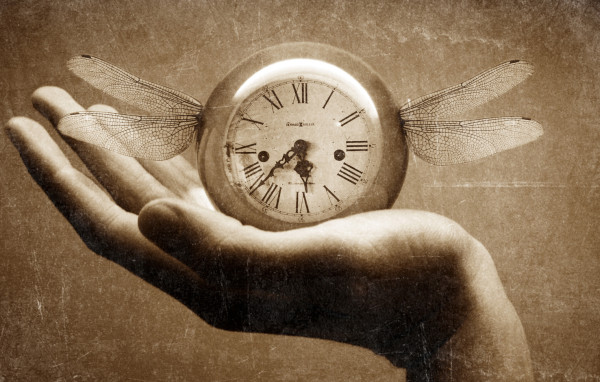 Humans think about the underlying systems we use for keeping time in much the same way that fish think about water. We simply don’t.

The numbers on the clock are a constant reminder of our daily schedule, where we should be, and what happens next. We eat, sleep, and breathe according to a framework of time established by ancient humans.

Without ever stopping to ask “why,” we have built our entire social structure for planet earth around some guy saying, “Hey, let’s do it this way.”

We now have the ability to shift from a system-centric approach to something with a far better human interface. The convergence of atomic clock technology, GPS, and an increasingly pervasive Internet will give us the tools we need to reinvent our core systems thinking about time.

In the following narrative, I will introduce you to a series of new concepts including Circadian Time, Continuous Daybreak, Micro-Banding Time Zones, and Virtual Moments.

This is far more than a Mensa exercise. As we explore these options we can begin to uncover some of the true imperatives for our human-to-time relationship.

Why do we hold meetings at 3:15 pm in the afternoon? The short answer is “because we can.”

Time, as we know it today, was invented by ancient humanity as a way of organizing the day. What began as tools for charting months, days, and years eventually turned into devices for mapping hours, minutes, and seconds.

The first mechanical clock movements began showing up in 13th century Europe, predating other key inventions such as the piano and the printing press. Spring powered clocks showed up in the 15th century and over time evolved into pocket watches a couple hundred years later.

Patek Phillipe created the first wristwatch in 1868, but it wouldn’t be until the 1920s when they became popular, setting the stage for a far more time-centric lifestyle.

In 1959 Seiko started developing their first quartz wristwatch and by the 1964 Tokyo Summer Olympics, they had a working prototype.

The first atomic clock was built in 1949 at the U.S. National Bureau of Standards. It was less accurate than quartz clocks, but served to demonstrate the concept.

Today, atomic clocks and wrist watches have become very affordable, and by extension, quite ubiquitous. This technology has set the stage for new innovations which will push our notion of time far beyond anything we’ve considered so far.

In 1784 when he was working as an American diplomat in France, Ben Franklin published a letter suggesting that people in Paris could save money on candles by waking earlier to use morning sunlight. He went on to propose taxing shutters, rationing candles, and waking the public by ringing church bells and firing cannons at sunrise. The idea didn’t go very far.

In 1895, New Zealand entomologist George Vernon Hudson proposed the idea of a 2-hour daylight shift to the Wellington Philosophical Society so he could have more time to collect and study insects during the evening hours. This was followed up 3 years later with a paper describing the benefits.

Most people, however, attribute the invention of daylight savings time to William Willett, a prominent British outdoorsman who noticed that many Londoners slept through a large part of their summer days. As an avid golfer, Willett was frustrated when he couldn’t complete a game simply because of the shortened evening hours. His solution was to advance the clock during the summer months, written up in a paper which he published in 1905.

But the idea went nowhere until war broke out. Starting on April 30, 1916, Germany and its World War I allies were the first to use daylight savings time as a way to save on coal during wartime. In short order, Britain, most of its allies, and other European countries soon followed suit. Russia and a few others waited until the next year and the United States formally adopted it in 1918. Since then, the world has seen it evolve with multiple changes and repeals along the way.

Time zones, as we know them today, are all oriented around Greenwich Mean Time (GMT). GMT starts at 0 degree longitude – the Prime Meridian.

Greenwich Mean Time was established in 1675 when the Royal Observatory was constructed to help English ship captains determine longitude at sea. During that time, each town’s local clock was calibrated so 12:00 noon would coincide with the sun at its peak – high noon. As a result, every village had a slightly different time.

The first time zone in the world was established by British railway companies in 1847, with GMT certified by portable chronometers. This quickly became known as Railway Time. Later, other railroads around the world began using their own brand of time zones to better manage their own operations..

In 1879, a Canadian, Sir Sandford Fleming, first proposed a worldwide system for time zones. He promoted this concept at several international conferences including the International Meridian Conference held in 1884.

The International Meridian Conference was put together at the request of U.S. President Chester A. Arthur in October 1884 in Washington, D.C. The primary objective was to officially determine the Prime Meridian of the world.

The conference did not adopt Fleming’s time zones because they felt it was an issue outside of their mandate. However, they did adopt a universal day of 24 hours beginning at Greenwich midnight. Beyond that, however, they were reluctant to interfere with other time-related issues they felt were better decided by local people in local communities.

The notion of a 24-hour day had been understood and heavily used for many centuries, but it didn’t become a global standard until 1884.

When clocks became widely used during the industrial age, people were forced to orient their lives around the specific start and stop times of their jobs. Regardless of how sunny or dark it was, the workday demanded people comply with the numbers on the clock.

With 12:00 noon occurring when the sun is at its highest, the times for sunrise and sunset are constantly moving.

As soon as clocks became a permanent fixture in human life, the 12-noon orientation became problematic because valuable daylight hours would be lost on the front and back end of work schedules based on the seasonal length of days.

The idea of Circadian Time started with me asking the question, “What if our clocks were oriented around sunrise instead of 12:00 noon?”

What if we started every day with sunrise occurring at exactly 6:00 am?

Virtually everything on earth works according to our natural circadian rhythms. Circadian rhythms involve the patterns, movements, and cycles stemming from the light and dark cycles of the earth’s rotation.

Circadian Time is based on the notion that our system for timekeeping no longer has to be the rigidly pulsing overlord of humanity that constantly demands compliance. Rather, our time systems need to be oriented around people, molded to the natural flow of humanity, creating fluid structures rather than our current, abrasively rigid ones.

As I explain the following three concepts – continuous daybreak, micro-banding time zones, and virtual moments – some of the opportunities will become clearer.

By Futurist Thomas Frey Author of “Communicating with the Future”

Featured image source | Thanks to FuturistSpeaker for this post