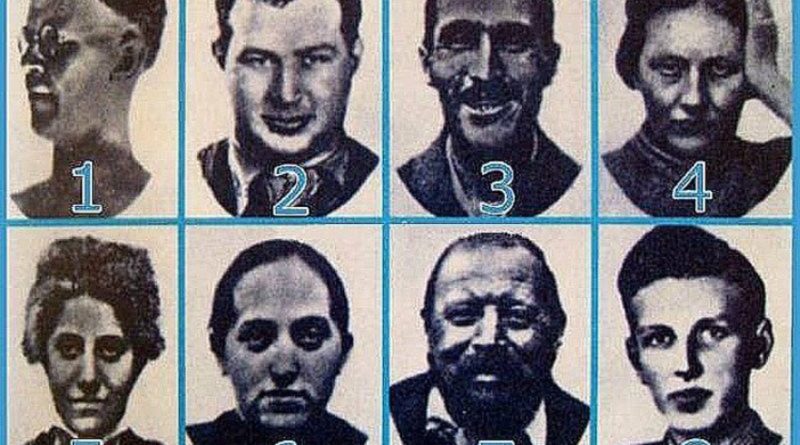 I have to admit, this is by far the most accurate psychology test I’ve done till now. It was so precise and correct, it was scary!

Each of us thinks that they know themselves, until we start diving deep into our subconscious and realize the depths of our personality.

What we are conscious of is just a tip of the iceberg. We have no idea who we REALLY are! And when someone or something reveals these truths to us we can’t believe how effectively we were blind to them. It’s all so clear in those moments. That’s how I felt after making this psychoanalysis.

However, in a day or two we forget about these revelations again and again returning to our old unaware mindset.

The ingenious test was designed in the 20th century by the Hungarian psychiatrist Leopold Szondi.
The aim was to explore the deepest repressed impulses of a person on the basis of sympathy or aversion caused by the specific photos of psychopaths.

The test is based on the general notion that the characteristics that bother us in others are those that caused aversion to ourselves at an early stage of our life and that’s why we repress them.

Here are some psychology terms you need to know before starting the test:

– Repression: According to the psychoanalytic concept, this is the most important psychological defense mechanism we have. Its most important function is to transfer thoughts and desires we are uncomfortable with to our unconscious.

– Denial: It is a mental process by which we absolutely refuse our deepest impulses (ie things we want), adopting the exact opposite pattern of the desired behavior.

– Sublimation: The process of transfer of our repressed choices, states or behaviors to the ones that are socially acceptable or useful, such as artistic activities, hobbies, professional choices, harmless little habits etc.

This psychology test will reveal your deepest darkest self

The original test included 6 sets of 8 portraits of people, each of whom had been classified as a sadist, an epileptic, an hysteric, a katatonic, a schizophrenic, a depressive and a maniac.

Here is a minor version of the test, which includes only one set of portraits, since it is very difficult to provide the full version of it with all the possible interpretations in one blog post. However, It’s INCREDIBLY effective and accurate!

Look at the portraits of these eight people and choose the one you would never want to meet at night in the dark, because his or her appearance causes disgust and fear in you. Then read the interpretation that corresponds to the number of the portrait you chose. 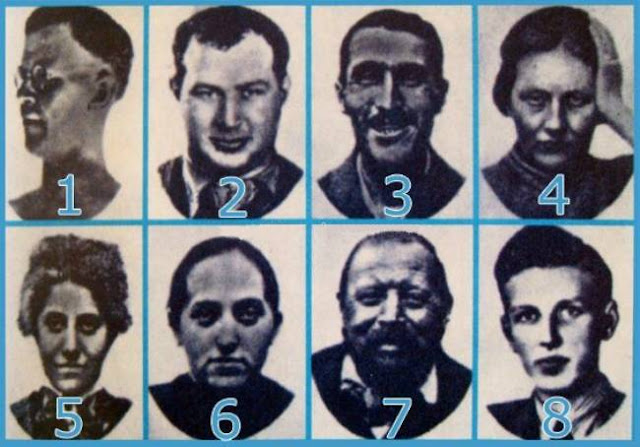 IMPORTANT NOTE: please don’t misunderstand the results of the test, which don’t imply that you have a kind of mental disorder, since the test was designed to make an assumption about the possible repressed impulses of each type of personality in accordance with the psychoanalysis theory.

You are likely to have repressed some experiences from the first years of life associated with authoritarianism in your behavior, a need to dominate and a propensity for bad intentions. If you chose the portrait of this teacher may have repressed some offensive or demeaning to other behaviors in your unconscious.

You are likely to be a completely harmless and peaceful creature, always ready to help others. If you are an office worker, your superiors may find it difficult to handle you. When you do not want to do something, you create barriers (for example, getting late to work or showing that you are in a bad mood). Often, when you have to defend yourself, you choose passive resistance and defiance, which in the long term exhaust those who created problems for you.

When we talk about personality disorders associated with brain disease, damage and dysfunction (as occurs in some cases of epilepsy), some of the diagnostic features can be impulsiveness, irritability, the outbursts of anger and aggression. If this stout gentleman with a round head caused revulsion and fear in you, it is likely that early in your childhood you repressed some of such feelings and behaviors to your subconscious.

It is most likely that you are a kind and peaceful person. Being meek and friendly, you give the impression of a responsible and self-controlled person. You are stable in your feelings and easily bond with people, ideas and objects.

Some features of this mental disorder is the excessive stimulation of imagination and cognition in general and negativism. If this unshaven but smiling gentleman caused negative feelings in you, you may have repressed some hyperactivity of your mind, which could make you lose touch with reality if it had not been transferred to your unconscious.

You tend to adopt stereotypical behaviors and do not like innovations and changes. Maybe you’re the type of timid and diffident person, who finds it particularly difficult to adapt to new situations. Your biggest fear is to lose self-control. You are a bit stiff, often defensive and perhaps inhibited person who never deviates from the ‘behavior codex’.

The schizophrenic personality is characterized by intense apathy, distortions of thought and incompatible emotions. If this impassive gaze and poker face gave you goose bumps, you probably repressed a feeling of indifference towards others and withdrawal from things and events at an early stage of your childhood.

You are probably quite a sociable person. You believe in socializing and communication with others, enjoying your companies and going out often. The sociability is rather misleading and perhaps hides an isolated person who lives with the feeling of being always alone. Your relationships may seem impersonal and superficial, as if they lack the true feeling. Deep down, you may feel that you do not need others and coexistence with them.

Some personality traits of hysterical people are superficial and unstable emotions, narcissism and exhibitionism. If chose this strange lady with heavy eyelids as the person that scares you most of all, maybe it’s because you have repressed an insatiable desire to captivate attention and a thirst for approval.

You give the impression of a modest person with intense inwardness. However, in reality, seeming a quiet and shy person, you may be possessed of an overpowering and excessive desire to charm others. You meticulously take care of your appearance and behavior. For example, you always try to be elegant and well-dressed, complementing your clothes with accessories that attract the attention of others.

Such people are likely to choose a rare/extravagant profession or hobby.

Lack of self-esteem, feelings of inferiority and guilt are the main symptoms of depression. The fact that this harmless being is an incarnation of aversion for you may mean that you are a deeply depressed person who manages to have these symptoms under control.

Perhaps you are an outgoing and carefree person. You always show dynamism, confidence and optimism. Sometimes, of course, you get upset and can manifest dysthymia and melancholy (“sad clown syndrome”). You can also be suspicious and morose.

It is very likely that shift your depressive tendencies to assuming the role of everybody’s psychologist, searching for solutions to other people’s problems.

Some diagnostic features of mania are extroversion, overstimulation, overestimation of self and a waste of money and emotions. If this kind face seems disgusting to you, it probably means that inside you there is a kind of excitement which, if not controlled, would transform you into a fanatic mystic.

You are very likely to be a person who does not want to provoke with his/her behavior and who detests noise, extremes and excesses. You are an example of discretion, restraint and measure. Being logical and thrifty, you always have a fully controlled behavior.

This kind of personality is expressed in a person’s desire to live and be accepted as a member of the opposite gender. If this young man seems dangerous and depraved to you, perhaps early in your childhood you repressed an identity problem.

If the defense mechanism of denial worked, you may have a tendency to emphatically confirm your biological sex. In this case, your behaviors, maners and appearance emphasize that you are a real man or a real woman. If you’re a man, you are very “macho”, and if you are a woman, you always try to look sexy and seek to flirt and attract men.

The post “Szondi Test with Pictures That Will Reveal Your Deepest Hidden Self” was written by Anna LeMind and originally published on www.learning-mind.com