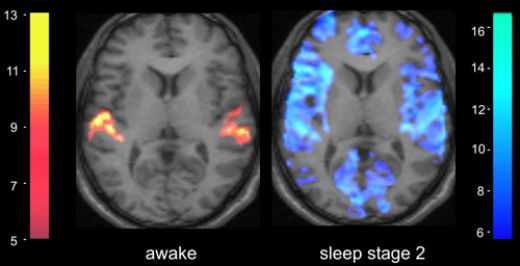 By Jonah Winter, Truth Inside Of You
Scientists have always been intrigued by the way the brain works when we are asleep and we dream. The REM phase, the rapid-eye-movement sleep phase, is the what we have long known happens when we dream: eyes move around fast during our dreams. Recently, a new research on the field discovered that our brain works pretty much in the same way regardless of if we are asleep and dreaming, or awake and seeing things. So, what we long thought, is true! We indeed “see”dreams in our sleep.

Dreams had been a matter of scientific interest since the early works of Freud. The great psychoanalyst believed that dreams were a way for the unconscious to reveal itself and its desires. More recent researches have come to the conclusion that sleep is not at all a passive state, as the brain works as it does when we are awake or lightly asleep. The only difference is that muscles are not active during sleep. American scientists William Dement and Nathaniel Kleitman did a research trying to relate the actual eye movement to the content of the dream and discovered that our eyes actually move in the way that people dream of seeing something: if a person dreams of climbing up a stair, their eyes will do a specific vertical movement. This is a theory that has been slightly controversial.

A new research from the University of Tel Aviv tried to map brain activity from inside the brain, for the first time. Using electrodes placed on the medial temporal lobe, the part of the brain that is connected to vision, on patients with epilepsy, they compared the activity of the brain during REM sleep and wakefullness. They found out that the brain activity during REM is similar to when the brain processes visual information and not to when the eyes move.

Although these are early results, what we tend to discover is that sleep is not only used for rest, but also that important brain activity is being carried out during our sleep. Their researches aim to answer a very hard question: “why do we really need to sleep?”