In January 2010, Janet Kinosian wrote an interesting article for the Huffington Post titled “What Your Sleep Position Says About You”. Much of the article focused on exactly that, examining the link between personality traits and various sleep positions.

For example, workaholic businessmen and entrepreneurs are apparently more likely to sleep on their backs (which, you’ll also learn, is called the royal position). Sleep on your stomach? You, along with the author and Madonna, are likely very persistent and goal-oriented with some strong compulsive tendencies. As with any study that attempts to tell you things about your personality, you’re either going to find the results spot-on or completely disagree – but what really caught my eye was this:

So what is considered the all-around healthiest sleep position?

Many doctors say it’s lying on one’s back, with the head slightly elevated, about 10 – 30 percent. This is postulated to give the brain optimal blood circulation rather than congestion and also allows for more un-obstructed breathing, says Dr. Steven Park, a head and neck surgeon and member of the American Academy of Sleep Medicine. You see many native cultures sleeping this way, via hammock and other devices, rather than on flat surfaces as in the West.

Sleeping in a hammock rocks (pun not intended but I’m keeping it nonetheless). It’s peaceful, relaxing and it feels great both when you fall asleep and when you wake up. Keep in mind though that not every hammock is going to be comfortable to spend the night in, so if you’re going to try it for the first time make sure you have a hammock that is designed with a full night’s sleep in mind. You shouldn’t have to worry about falling out of it in the middle of the night and you don’t want to wake up with a permanent rope tattoo from sleeping on knots or string (silky smooth parachute nylon is where it’s at!). 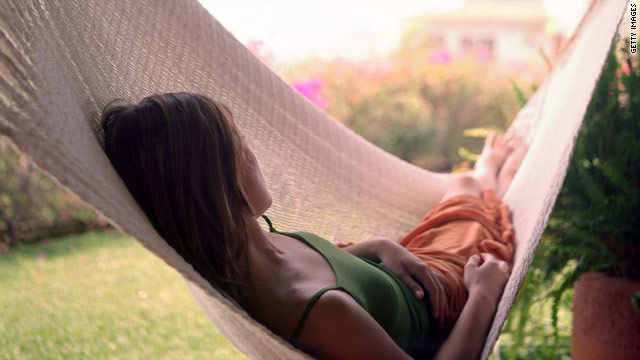 It seems that the health benefits of hammocks are just beginning to be studied in depth and we’re really just scratching the surface.

From the medical hammocks used in premature baby therapy to their application in the treatment of arthritis, acid reflux, sleep apnea, autism or simply to reduce stress and provide a healthier night sleep, it’s exciting to see science catching up with what native cultures (and hammock lovers across the world) have known for centuries.

The zero-pressure point ergonomics and the ability to slightly elevate your upper body are the keys to a healthy sleep that no flat surface or mattress can truly provide. It doesn’t mean you need to replace your bed with a hammock but, if you’ve got a place at home to hang a hammock, I challenge you to think of it as more than just a place to spend a few minutes when you need to relax. Forget about those bad experiences you had falling asleep in rope hammocks and waking up with a waffle pattern on your face or a pain in your back. Get a quality hammock, learn how to sleep in it properly and take your next nap in it or try spending a full night in it if you never have before.