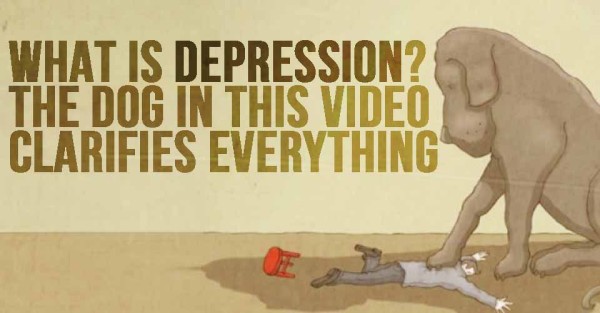 Chances are you know someone who has, or is suffering from depression. Maybe that person is you. Depression affects almost everyone at some point in their life, and nearly twice as many women as men are affected by a depressive illness each year.

In the context of physical illness, depression is commonly unrecognized and therefore untreated. The Brain & Behavior Research Foundation says this about depression:

I have known several people who suffered from major depressive disorder (MDD), and some who are still trying to tread water despite their feeling of drowning. For someone who has been diagnosed with clinical depression, trying to explain what you are going through or what you are feeling, is impossible. Even getting up the strength to attempt an accurate description is overwhelming.

This short animated video perfectly shows us what it is like to have these feelings- the sullen ebb and flow, the confusing darkness, the wishing for normalcy and so much more that others might not be aware of.

The National Institute of Mental Health understands how vital research is to this area and has plans to study and improve upon the following areas in the near future:

Read: 12 Easy Tricks to Fight Against Depression
Do you know someone who has or is suffering from depression? What advice do you have for others in their shoes? Let us know in the comments!