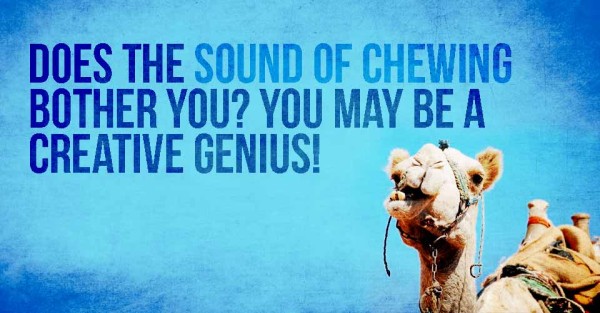 There are some sounds that bother or annoy the majority of people, like nails on a chalkboard for example. But if you find yourself being driven mad by the sound of someone chewing, slurping, or smacking their lips, you may have a diagnosable condition called misophonia– an increased sensitivity to certain noises.

Misophonia literally translates to “hatred of sound”, and approximately 20% of the population may have some degree of it.

While it might be considered an irksome condition by those who have it, researchers from Northwestern University have found the cause for misophonia could be because they are too creative. The researchers determined that the inability to block out additional noise could be a sign of creative genius.

The study found the more sounds that bothered a person, the higher they scored on the creativity measurement tests.

Read: 11 of the Smartest People to Have Ever Lived (Based on IQ)

Darya Zabelina, head author on the study said, “‘Leaky’ sensory gating, the propensity to filter out ‘irrelevant’ sensory information, happens early, and involuntarily, in brain processing and may help people integrate ideas that are outside of the focus of attention, leading to creativity in the real world.”

There are ways to control the irritation felt by misophonia. Ms. Wu, of the University of South Florida told The Wall Street Journal “You should avoid “temporary Band-Aids. If you always put on headphones or move to another room, you aren’t fully participating in the relationship. The idea is to learn to tolerate the symptoms.”

Read: 4 Struggles of Creative People in an Uncreative World

Do you or someone you know have misophonia? Try associating a positive experience with the annoying mouth sounds, and you’ll eventually remove the negative emotions felt. The person who coined the term “misophonia”, Pawel Jasterboff, has found that this technique works more than 80% of the time.