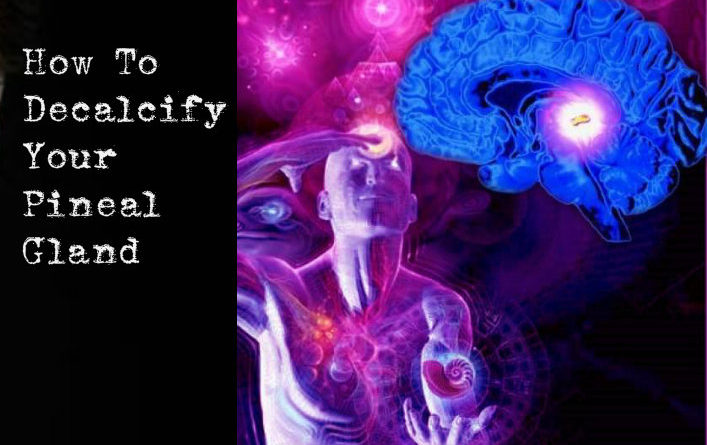 And Why This Is Important To Your Health!

The pineal gland is a small, pine-shaped endocrine gland that can be found near the centre of the vertebrate brain, tucked in a groove between the two hemispheres. It mainly produces melatonin, a hormone derived from serotonin that affects the rhythms of the body (especially the wake-sleep patterns), as well as seasonal functions such as reproduction.

It has also been theorized that the pineal gland actually produces Dimethyltryptamine (or DMT), a natural hallucinogen responsible for visions and mystical states of consciousness. This would certainly explain why, throughout human history, the pineal gland has often been viewed as “the third eye” or the human being’s seat of spirituality.

But whether or not you partake in this mystical view, the calcification of the pineal gland remains a scientifically grounded concern. When the function of this important endocrine gland is impaired, symptoms such as reduced IQ, insomnia, fatigue, depression or other psychological disorders can be observed, which means that decalcifying the pineal gland is not only spiritually desirable, but also physiologically beneficial.

7 Ways to Decalcify the Pineal Gland

In order to effectively decalcify your pineal gland, you must first understand what participates to its calcification. These substances include:

Needless to say, before you can begin the process of detoxifying the pineal gland, you must attempt to remove these substances from your everyday life in order to avoid further calcification.

Take a moment to consider the “journey” of tap water to your home. In most cases, it travels through extremely old pipes which are not only built with potentially harmful materials (such as lead), but that are also very poorly sterilized. Indeed, the “cleansing” process commonly involves the use of chlorine, arsenic, pesticides, herbicides, certain hormones or fluoride. The tap water you drink picks something up from all of these substances.

The pineal gland is primarily affected by the fluoride in tap water, but even if this were not the case, investing in a good quality filter would still make sense. (Learn more about filtered water)

Vegan and vegetarian diets are gradually becoming recognised for their potential health benefits, as well as for the positive impact they have on the environment. If you can switch to such a diet, then all the better for you and the environment.  But not everyone can give up meat or animal products, and this is not absolutely necessary for the decalcification of the pineal gland. What is essential is that you up your intake of vegetables, legumes and fruits, all of which are packed with powerful antioxidant substances, while at the same time decreasing your intake of processed foods and mass-produced meat.  When you do eat animal products, do your best to choose organic grass fed and hormone-free.

Over the past decade, superfoods have really made a name for themselves. Literally. Items such as spirulina, chlorella and wheatgrass are easy to consume and are incredibly rich in vitamins, minerals and antioxidants. More importantly, they contain large amounts of chlorophyll, a substance that has been shown to remove toxic metal from organs and help the body eliminate metal build-ups.

Other superfoods like kale, broccoli and raw cocoa have similar properties and also boost the immune system which aids in the reversal of pineal gland calcification. They might not seem yummy on their own, but once you begin to mix these foods into your smoothies, you’ll immediately note their effect on your wellbeing.

Bentonite is a type of clay that usually forms from the weathering of volcanic ash, often in the presence of water. Throughout history, it has been used as a means to detoxify and alkalize the body, to heal certain skin conditions and to relieve digestive problems.

Because it is a type of magnetically-charged clay, bentonite tends to bind with toxins, including heavy metals and chemicals, so when it is ingested, it helps to eliminate them through natural digestion. Among other things, this facilitates the decalcification of the pineal gland. (You can purchase Bentonite Clay at a great price from Thrive!)

Most dental care products contain harmful substances including fluoride, PEG-60 and propyl/methylparaben. To avoid further calcification of the pineal gland, review your toothpaste and your mouthwash for any of these ingredients, especially for the widely common fluoride. As an alternative, you could try using herbal toothpastes and coconut oil instead of mouthwash.

An impaired pineal gland is usually the result of a build-up of calcium and toxins. Some natural detoxifiers that have been demonstrated to facilitate the removal of these harmful accumulations include:

More than a new diet, it’s a Lifestyle

Obviously, decalcifying the pineal gland and preventing any further impairment is a process that relies heavily on certain dietary guidelines. However, as can be intuited from the methods described above, it is also a matter of lifestyle.

Many of the suggested changes do not solely concern the pineal gland, but rather benefit the well being of the entire body. In turn, as the body receives more vital nutrients and is purified of harmful substances, it will function more effectively and lead to an exhilarating sense of rejuvenation. If nothing else, this alone should make the adoption of these lifestyle suggestions worthwhile.