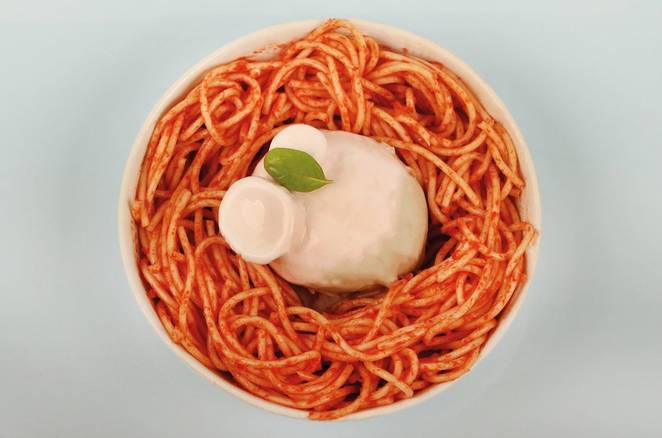 These wacky ‘tableware’ stones are meant to trick diners into thinking there’s more food on their plates than there actually is.

How many times have you loaded up a plate with food, thinking you could eat it all, but found you were just too full? There’s truth to the old saying, “Your eyes are bigger than your stomach.” While self-control is the best way to avoid overeating, there are some tricks to discouraging that unpleasant stuffed feeling, such as eating fewer meals, drinking lots of water, or using a smaller plate.

Or you could buy one of Marije Vogelzang’s amazing rocks.

These odd creations are part of a project called Volumes, aimed at helping people realize they don’t need as much food as they think. The rocks are dipped in colorful, food-safe, heat-resistant silicone and are meant to sit in the middle of a plate of food, occupying space. This visual trick, according to Dezeen, is “intended to trick the diner into believing there is more food in front of them than there actually is, meaning they are more likely to be satisfied.”

There is solid behavioral science behind this concept. Vogelzang, who runs the food design department at Design Academy Eindhoven, explained how human brains rely on vision to gauge how much food we’ve eaten:

“For example, if we eat shelled peanuts and leave the shells on the table, we will eat less than if we would take the shells away directly after eating the peanuts. The project Volumes is an attempt to influence our eating behavior and our eating culture.”

The rocks also act as thermal agents, keeping food warm or cool, encouraging an eater to slow their meal – another healthy approach. The silicone coverings are solidified into odd lumps and protrusions, which are meant to “visually entice diners, with protruding elements that allow them to interact with the food in unusual ways.”

The only problem is, it might have the opposite effect. Commenters on the Dezeen article have questioned the aesthetic appeal of the stones, likening them to “abstract organs” and a “raw chicken breast with protruding pixie penises,” which is enough to take away one’s appetite in an instant. Others just don’t like the shapes:

“While this is an interesting experiment, they are so ugly. Not subjective opinion here, those are objectively ugly. Even if it’s just an artistic statement, still ugly. In concept, this is a great idea, so I guess the next step would be refining it to torus-shaped plate or a bowl with a cone in the center.”

Vozelgang is optimistic. She sees the stones as an evolution in tableware. For centuries, we’ve been stuck on plates and bowls, but these are a “next step… to give food to your body and keep your body healthy.”

It’s certainly an intriguing concept, but I can’t help but think that no rock in the middle of my plate would prevent me from getting up for a second helping of spaghetti if I really wanted it.