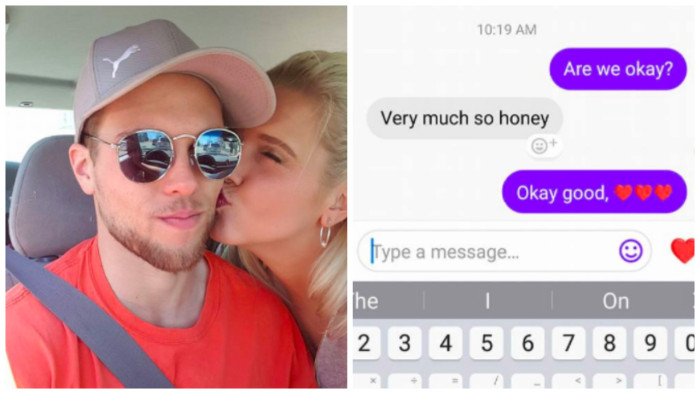 A woman shared a Facebook post about how anxiety and mental illness can cause those suffering from it to push people away, and how important it is to be with someone who won’t let you.

Her boyfriend sounds like just that kind of person.

Callie Amelia Theodore suffers from anxiety, and she knows how lucky she is to have a supportive boyfriend by her side. Her message about the simple ways her boyfriend is there for her has over 136,000 shares on Facebook. Clearly, she’s striking a chord.

She starts her post with a description of anxiety from Thought Catalog: “Someone with anxiety is inclined to assume everyone is going to leave. The truth is they battle something they can’t control and there is a sense of insecurity within themselves when it comes to relationships. They know it’s difficult and they don’t want to burden you with their irrational thoughts and worries. So instead, they try to push you away before you get the chance to leave yourself.”

She goes on to say how important it is to find a partner that you can not only be open with about your issues, but who won’t cut and run when things get a little intense.

“Find someone that no matter how hard you push them- they do not leave.”

Chris Briggs is that person for Callie. As her boyfriend, he patiently reassures her when anxiety makes her question their relationship. She shared an image of a text exchange they had, along with her fears that her anxiety would get the best of him.

“It’s hard loving someone who suffers from anxiety. They will be over sensitive, they will make up scenarios in their head causing an argument, and constant reassurance is needed.”

In the text, she asked him if they were okay, and his simple response, “very much so honey” speaks volumes to her.

“There are people out there like that. People that calm you and bring you a sense of security- that will be stronger than any dose of medication that can be prescribed.”

Briggs clearly has experience with, and much empathy for, people who suffer from mental health issues as evidenced by the YouTube video she shares at the end of her post.

In the video, he discusses his own rough days, as well as the suicide of a local meteorologist who seemed perfectly happy, as an example of how everyone has demons. Depression isn’t logical, it’s not something that can be dismissed as a bad day or shrugged off with a “get over it!” and you never know what someone is going through. “Depression does not discriminate,” whether you’re young, old, popular or a loner. It’s important to normalize it so people feel safe asking for help.

Briggs stresses the need for a support group to help you through your darker days, and encourages his viewers to fight their demons every day. Thankfully, Callie and Chris have each other and they seem well-equipped to weather their respective storms.

Chris and Callie end both end their social media posts with messages of encouragement, and Callie’s is something it would do well for anyone struggling with anxiety to remember.

“You may have anxiety, but anxiety doesn’t have you.”

Mike Julianelle is a 30-something Brooklynite sharing his experiences as a father and bitching about the ways the existence of his children is destroying his life. He can be found sarcastically denigrating his two sons, himself, and parents everywhere on his blog, dadandburied.com, Facebook, Twitter , Instagram, and assorted publications.