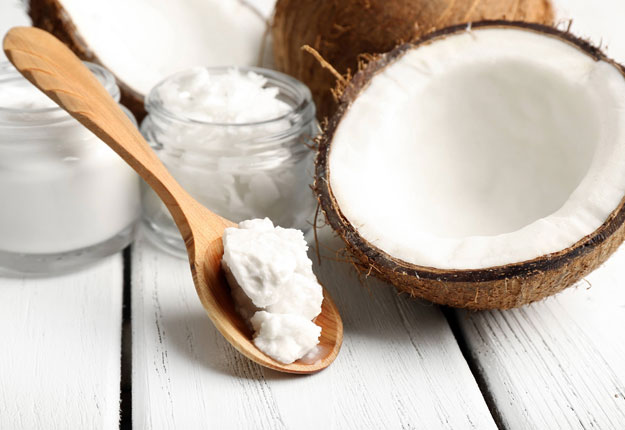 Whether you use the basics, or everything you can find, a lot of beauty products can be replaced with coconut oil!

Raw, organic coconut oil, besides being good enough to eat (which we’ll discuss in a minute) has a plethora of benefits apart from actual ingestion. Here’s a list of 15 Beauty Products You Can Instantly Replace With Coconut Oil:

1.Smooth shave — If you’ve been plagued by red, irritated and razor-burned skin after shaving, coconut oil is both soothing and antibacterial.

2.Rash recovery — Other rash problems from diaper rash to mild allergic reactions can be remedied using coconut oil. Propylene glycol is one chemical found in commercial moisturizers that can cause skin irritation and dermatitis.

A study on the metal content in lip balm revealed lead, aluminum, cadmium, chromium and manganese in high concentrations, some associated with reproductive, developmental or other adverse health effects.2

4.Facial cleanser — Effective as a face wash, mixing equal parts coconut oil and castor oil is known as oil cleansing. Massage it into your skin and remove gently with a warm washcloth.

Ninety percent of the body washes and cleansers you buy contain harmful chemicals such as sodium lauryl sulfate or sodium laureth sulfate, which, in combination with other chemicals, can form cancer-causing nitrosamines.3Coconut oil can even improve acne.

6.Night cream — While you may not want to use coconut oil under makeup, applying it lightly before bed will hydrate your skin because its fatty acids form a natural emollient. If the skin around your nails is hard and peeling, treat your cuticles to a soothing coconut oil rub to keep them soft.

7.Deodorant — A tiny dab of coconut mixed, if you desire, with an essential oil such as lavender is very effective — so much better than the antiperspirants containing aluminum, which is linked to Alzheimer’s.

Another deodorant recipe combines 3 tablespoons each of coconut oil, arrowroot powder (or cornstarch) and baking soda.

8.Foot fungus fighter — Because it’s antimicrobial and antibacterial, coconut is very effective in combating athlete’s foot. Rub it on the bottoms of your feet after every shower.

Antiviral, antibacterial and antifungal compounds in coconut oil have been shown to inactivate microorganisms such as bacteria, yeast and fungi.4

9.Soothing bath — As an alternative to bubble baths that may induce urinary tract infections, especially in children, drop a dollop of coconut oil in your bath with a few essential oils. It’s both moisturizing and helps kill bacteria.

11.Body lotion — Moisturizers you buy at the store typically contain harmful chemicals such as aluminum, phthalates, parabens, formaldehyde and propylene glycol.5 Coconut is a fragrant, moisturizing alternative containing none of these.

13.Oil pulling — An oral rinse works much like a mouthwash, only you shouldn’t gargle with it. As you swish vigorously for five to 15 minutes, it penetrates the soft tissue between your gums and “pulls out” bacteria that causes cavities, plaque and bad breath.

14.When applied to infected cuts or wounds, coconut oil develops a layer of naturally protective chemicals that also keep out dust, fungi, bacteria and viruses. Applied to bruises, it speeds up the healing process in damaged tissues.

15.Frizz fighter — People with hair that tends to frizz often turn to silicone- or alcohol-based gels and mousses, which coat the hair, prevent it from absorbing moisture and dries out the hair shaft. Just a few drops of coconut oil are all you need for a natural hair conditioner for smooth, silky shine.