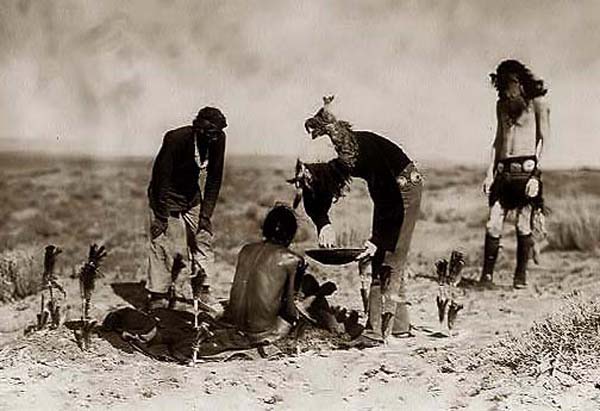 Anyone interested in living off the land or wishing to prepare themselves for a crisis would be wise to study some of their local plants.

Native people had an extensive knowledge of which plants, and which parts of the selected plant, were valuable for certain health problems.

1. Lichens – Pulled from rocks or trees, these were chewed to stop mouth pain, canker sores, and sore or swollen gums.

2. Purple loco weed (oxytropis) – The leaves are crushed and boiled, then the steam inhaled to open up airway passages and ease breathing. 3. Desert thistle – Used to stop the chills and/or fevers. Commonly given in tea form.

4. White horehound – This was used as a tea for coughs and sore throats.

Fast, All-Natural Pain Relief With No Nasty Side Effects!

5. Snake weed – Despite the name, this was not used for snake bites, but for headaches. Unlike other plants, this one was used externally by placing wet leaves on the forehead. Some people refer to this as broom weed or broom snakeweed.

6. Indian paintbrush (castilleja) – Used for most common stomach problems, including stomach aches, cramps and indigestion. Many tribes referred to this as the prairie fire plant. The flowers are very sweet and tasty, although other parts are not edible.

7. Indian hemp (Apocynum cannabinum) – While this relative to cannabis cannot be consumed, the roots were boiled to make a tea to treat intestinal worms and stop dysentery.

8. Antelope sage – The root of this plant was brewed into tea to stop general stomach pain and cramps.

9. Sand verbena – Sometimes called desert verbena, the leaves and flowers were consumed in tea form to stop stomach cramps, as well as to make a general, soothing tonic.

10. Greasewood – A tea made from the leaves of this plant was thought to make childbirth quicker and easier for the mother. 11. Silkweed – Consumed as a tea, this plant is a general tonic used after giving birth.

12. Bushy bird’s beak – Flowers and leaves were often brewed as tea to stop or shorten the menstrual cycle.

Remedies for Skin Issues and Wounds

13. Artemisia – This plant is used for burns, boils and other types of skin wounds.

14. Spurge – While spurge can be eaten, it was also used as medicine. Spurge was ground into a paste and rubbed on the skin to stop acne or other types of skin problems.

15. Green briar – The leaves of this bush were beaten into a paste, and then applied to sores, burns or open wounds. Fresh leaves were then wrapped over the poultice and used as a type of bandage.

16. Orange agoseris – Leaves and flowers were pounded into a paste and applied to most wounds to stop infection and speed healing. Most common uses were for serious injuries, such as knife or arrow damage.

17. Blue corn – Corn played a vital part in the life of most Navajo. Besides being consumed as food and used in ceremonies, blue corn was used to cleanse and purify the skin. Ground blue corn, which is more coarse than yellow or white corn, was a natural exfoliator, which encourages the growth of new skin by removing dead skin cells.

General Tonics, Antiseptics and Other Remedies

18. Sage or sagebrush – While this plant tends to give many people hay fever, for the Navajo, the leaves and flowers were made into a tea, which served many purposes. This tea was used as a treatment for diarrhea, as an eye wash, as an antiseptic for disinfecting wounds, and as a hair wash. People once said, “Those who drink sage tea never grow old.” This is because rinsing hair with a strong sage tea acts as a dye, keeping the hair black.

Just 30 Grams Of This Survival Superfood Provides More Nutrition Than An Entire Meal! 19. Hawkweed – This plant is a close relative of dandelions, so it is no wonder that the Navajo used it as a natural diuretic. All parts of this plant are edible and can be eaten; however, it is most commonly consumed in a tea form.

20. Red juniper – The inner bark of this type of juniper was rubbed onto the hair and scalp, stopping most kinds of dandruff and itchiness.

21. Yucca – Also known as soap weed, the leaves of the yucca plant were pounded into a thick paste, and then rubbed on the hair and scalp. This acts as a natural type of shampoo, removing grease and dirt from the hair.

22. Horseweed – This was a general, all-around good tonic that was used for many ailments, including stopping diarrhea, and as a diuretic and astringent.

23. Yellowtop – The gray green leaves of this plant were the most common remedy given for spider and other insect bites.

24. Green gentian – Commonly given to calm the nerves or for emotional distress.

Many plants were used in combination with one another. It was thought that by mixing plants, it would cure multiples problems at one time, or that if one ingredient was ineffective, another would certainly work.

Most times, there were one or two “specialists” who knew which plants should be used for what, and which combinations could be used. This was generally the Shaman, who oversaw most health problems, and a female elder, who was generally called upon to take care of “female” problems and assist in childbirth.

The Navajo and other native people spent hundreds if not thousands of years researching plants. Please use extreme caution and be certain that you know not only the exact species you are choosing, but how it might affect you.

This article is for informational purposes only and is not intended to diagnose or cure any particular health condition. Please consult with a qualified health professional first.