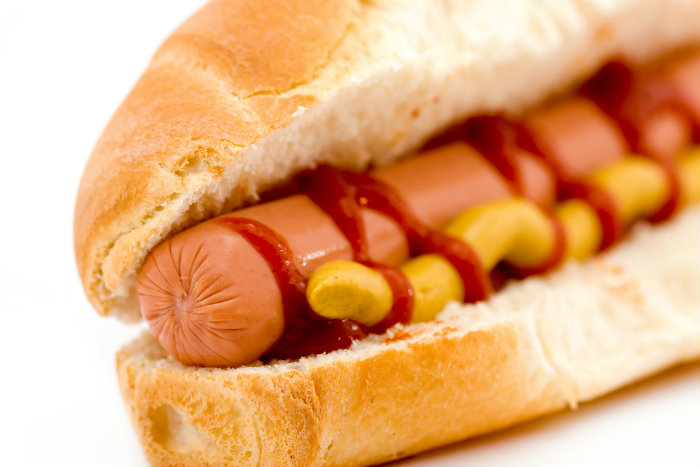 The ingredients in America’s winning Weiner are worth knowing about…

The 4th of July has passed, and over the weekend millions of Americans celebrated their freedom by watching
fireworks and roasting hot dogs over open flames. But while Americans love their hot dogs (they collectively consume 20 billion hot dogs annually, according to the National Hot Dog and Sausage Council), the ingredients in the franks are what make the food – and the amount consumed – so concerning.

As you’ll read below, 15 ingredients comprise the conventionally-produced hot dog, and most would not have been found in your grandmother’s cupboards. (Usually a good indicator if you should eat something or not)

Thanks to TreeHugger, following are 15 shocking ingredients you likely never knew are in America’s winning Weiner, the Original Ball Park frank:

This ingredient looks more like strawberry frosting than blended meat and bone bits, and the USDA recognizes this, defining mechanically separated poultry (MSP) as “ a paste-like and batter-like poultry product produced by forcing bones, with attached edible tissue, through a sieve or similar device under high pressure to separate bone from the edible tissue.” Hot dogs can contain any amount of mechanically separated chicken or turkey.

According to 1994 USDA rules, any meat labeled as the meat it is can be taken off the bone by advanced meat recovery (AMR) machinery that “separates meat from bone by scraping, shaving, or pressing the meat from the bone without breaking or grinding the bone.”

The USDA states that hot dogs must contain less than 10 percent water.

This ingredient is a combination of cornstarch and acids, and is used as a thickener and sweeter. As MSNBC notes — it contains few beneficial nutrients but does add extra calories.

In 2004, to protect consumers against Bovine Spongiform Encephalopathy (mad cow disease), mechanically separated beef was considered inedible and prohibited for use as human food, so be glad you won’t be finding it in your dog.

It’s no surprise hot dogs are salty, they’re expected to be. But did you know that each one has about 480 milligrams, or the rough equivalent of 20 percent of your recommended daily allowance? High sodium intake is correlated with increased risk for high blood pressure, stroke, and hormonal imbalances.

This hydroscopic, white, odorless solid is prepared commercially by the neutralization of lactic acid with potassium hydroxide. The FDA allows its use as as a flavor enhancer, flavoring agent, humectant, pH control agent, and for inhibiting the growth of certain pathogens.

Any of three sodium salt of phosphoric acids that can be used as a food preservative or to add texture — because texture is important when you’re eating a tube of meat paste.

Under current FDA guidelines, most flavoring agents allowed to be listed as “flavor” rather specified individually, so, this remains a bit of a mystery.

Nothing new: Beef stock is boiled water with pieces of muscle, bones, joints, connective tissue and other scraps of the carcass. Yum…?

This is a molecular compound of acetic acid, sodium acetate, and water of hydration. The FDA allows its use as an antimicrobial agent, a flavoring agent and adjuvant, a pH control agent, and as an inhibitor of the growth of certain pathogens.

The ingredient is a sodium salt of erythorbic acid, and is often used as a preservative. It also helps meat-based products keep their rosy hue. Side effects have been reported, such as dizziness, gastrointestinal issues, headaches and on occasion, kidney stones.

Basically, a filler and/or thickening agent used in processed foods, it’s a compound made from cooked starch, corn, or wheat.

This common preservative helps preserve the red color of cured meat — although studies have shown that consuming sodium nitrite may increase cancer risk and trigger migraines. Animal studies have linked sodium nitrates to an increased risk of cancer.

An oil-based extract from the paprika plant — a natural ingredient! — used for color and longer shelf life.

Keep in mind, these ingredients are standard for conventionally produced franks. If you’re a hot dog lover and aren’t ready to ditch this food, no problem! Find a healthier alternative by opting for organic, minimally processed, and ethically sourced dogs that offer more nutrition and contribute to less waste on the planet.