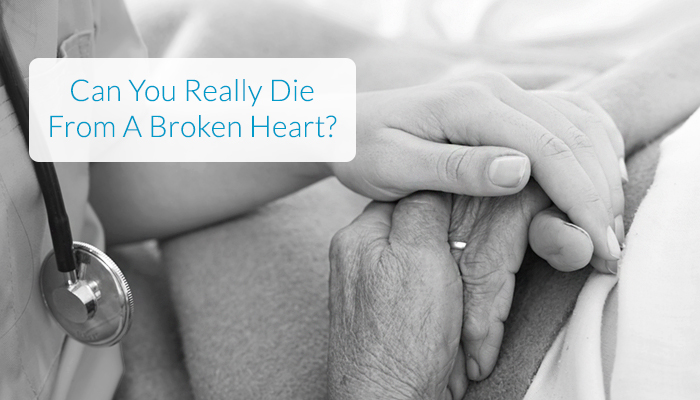 When married couples or family members die in quick succession, it’s easy to sentimentally attribute the second death to a broken heart.

My daughter asked if it’s possible to die from a broken heart. I think Debbie Reynold’s knew her daughter needed her. God granted her wish

The mother/daughter bond is very strong. I believe we lost Debbie from a broken heart… RIP you two incredible icons.. Debbie and Carrie xo

But can you really die of a broken heart?

“Broken heart syndrome — which is, in fact, a real thing — is when someone finds out some shocking news, typically terrible news, and there’s a massive release of these stress hormones that are released into the bloodstream, and the heart is then bombarded with these stress hormones,” said Dr. Matthew Lorber, a psychiatrist at Lenox Hill Hospital in New York.

The news doesn’t have to be bad; it could even be good news delivered in a sudden, shocking way, explained Lorber.

“Anything that causes a shock or startles can cause broken heart syndrome,” he said.

The symptoms are intense chest pain, shortness of breath and extreme changes in blood pressure. When the stress hormones barrage the heart, they actually change its rhythm — speeding and slowing the heart in succession — causing pain and leaving a person gasping for breath.

Though a stress-based theory is probably correct, the precise cause of the syndrome remains unknown, according to Dr. Kevin R. Campbell, a cardiologist and assistant professor of medicine in the division of cardiology at University of North Carolina.

“It’s really an interesting thing we don’t fully understand,” Campbell said, explaining that the condition was first described and studied in 1990 by Japanese researchers, who referred to it as Takotsubo syndrome.

“If you actually take a picture of the heart in the operating room, it looks dilated and balloon-like,” Campbell said, and that’s how the condition got its original name: The heart is shaped like the Takotsubo pots used to catch octopus in Japan.

Despite a similar appearance to a heart attack, there’s a major difference in that patients with Takotsubo syndrome “don’t have any blockages in the heart,” he said. In fact, “the arteries look completely normal,” though the heart itself is dilated and ballooned and very weak.

Another important difference: Patients recover almost spontaneously over the course of days or weeks, Campbell said, adding that cardiologists commonly treat these patients with the same medicines used for heart attack.

Broken heart syndrome is often referred to as “stress-induced cardiomyopathy,” where cardiomyopathy refers to a weakening of the heart muscle.

In rare cases of a weak heart unable to take the rapid changes induced by stress, broken heart syndrome “can lead to fluid actually getting into the lungs. It could lead to dangerous changes in blood pressure. It can even lead to heart attack, which can lead to death,” Lorber said.

Extreme stress can also result in a cascade of other physiological events ending with stroke.

“We know that stress can induce cardiac arhythmias — irregular rhythms in the heart — that can cause clots to be formed and thus produce large strokes,” said Dr. Paul Wright, chairman of neurology at North Shore University Hospital in Manhasset, New York, and Long Island Jewish Medical Center in New Hyde Park, New York.
Severe emotional shock “can cause constriction of the vessels of the heart, which can mimic a heart attack, which can cause cardiac rhythm abnormalities,” Wright said. A person could experience an ischemic stroke, in which a lack of blood flow deprives an area of the brain of nutrition.

“Extreme emotional stress can also cause rises or changes in blood pressure, which can result in hemorrhagic strokes,” Wright said. That’s when a blood vessel ruptures and bleeds into the brain tissue.

Though broken heart syndrome is not completely understood, the stress-induced theory has earned support from doctors focused on mental health.
“In general, we know that there’s a tie between cardiac health — heart health — and mental health,” Lorber said. He added that people who have untreated depression and those with untreated anxiety disorders are “at a higher risk for having heart disease and heart attacks.”

“The most likely reason for this is, depression and anxiety cause a release of stress hormones that get into the bloodstream and impact the heart,” Lorber said. “The more your heart is exposed to this, the more likely you are to have a heart attack.”
It’s more typical for broken heart syndrome to go away quickly, with no long-term consequences. Those who wander into an ER are treated symptomatically, their doctors simply verifying that they did not, indeed, have a heart attack.

With no lasting damage a month or two later, it’s simply a bad memory for most who suffer broken heart syndrome.
Still, a rare few do die of a broken heart. Though it’s not often, Lorber said, “you do hear about someone not wanting to live without their loved ones.”