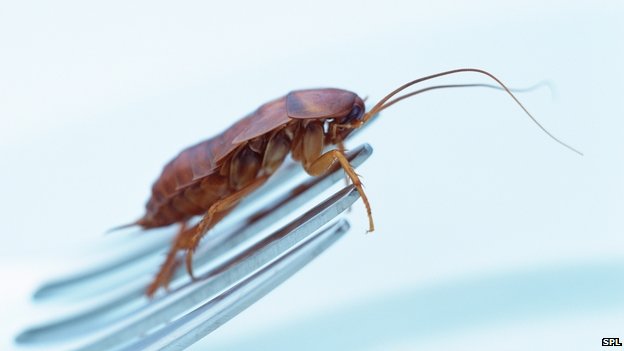 An international team of scientists has just sequenced a protein crystal located in the midgut of cockroaches. The reason?

It’s more than four times as nutritious as cow’s milk and, the researchers think it could be the key to feeding our growing population in the future.

Although most cockroaches don’t actually produce milk, Diploptera punctate, which is the only known cockroach to give birth to live young, has been shown to pump out a type of ‘milk’ containing protein crystals to feed its babies.

The fact that an insect produces milk is pretty fascinating – but what fascinated researchers is the fact that a single one of these protein crystals contains more than three times the amount of energy found in an equivalent amount of buffalo milk (which is also higher in calories then dairy milk).

Clearly milking a cockroach isn’t the most feasible option, so an international team of scientists headed by researchers from the Institute of Stem Cell Biology and Regenerative Medicine in India decided to sequence the genes responsible for producing the milk protein crystals to see if they could somehow replicate them in the lab.

“The crystals are like a complete food – they have proteins, fats and sugars. If you look into the protein sequences, they have all the essential amino acids,” said Sanchari Banerjee, one of the team, in an interview with the Times of India.

Not only is the milk a dense source of calories and nutrients, it’s also time released. As the protein in the milk is digested, the crystal releases more protein at an equivalent rate to continue the digestion.

“It’s time-released food,” said Subramanian Ramaswamy, who led the project. “if you need food that is calorifically high, that is time released and food that is complete. This is it.”

It’s important to point out that this dense protein source is definitely never going to be for those trying to lose weight, and probably isn’t even required for most western diets, where we are already eating too many calories per day.

But for those who struggle to get the amount of calories required per day, this could be a quick and easy way to get calories and nutrients.

“They’re very stable. They can be a fantastic protein supplement,” said Ramaswamy.

Now the researchers have the sequence, they are hoping to get yeast to produce the crystal in much larger quantities- making it slightly more efficient (and less gross) than extracting crystals from cockroach’s guts.

Who needs kale and quinoa when you have cockroach milk supplements?

…Yeah, we aren’t 100 percent convinced either. But if it helps alleviate the food shortages we’ll have to deal with this generation, we’ll take it.

The research was published in IUCrJ, the journal of the International Union of Crystallography.