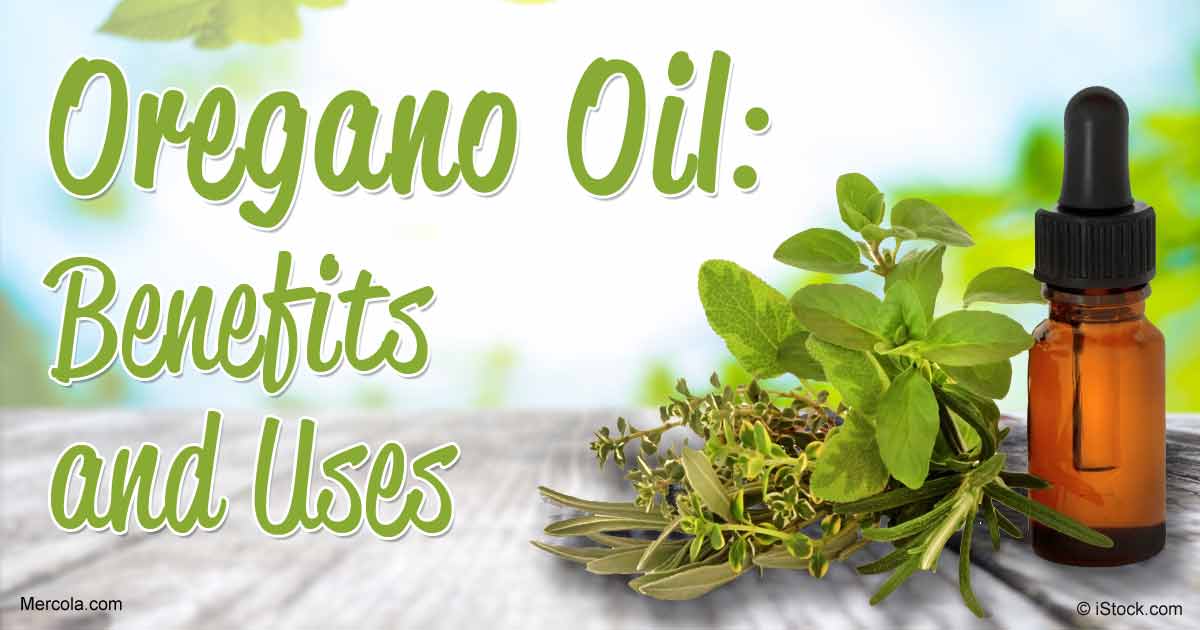 Oregano, the fragrant herb commonly used to flavor pasta and meat dishes, is renowned for its versatility in the kitchen. But did you know that it can also be transformed into an herbal oil with a wide range of benefits? Read on to learn more about oregano oil.

What Is Oregano Oil?

Oregano oil is derived from the leaves and flowers of oregano (Origanum vulgare), a hardy, bushy perennial herb, and a member of the mint (Lamiaceae) family. It’s native to Europe, although it grows in many areas around the world.1

The ancient Greeks and Romans have a profound appreciation for oregano, using it for various medicinal uses. In fact, its name comes from the Greek words “oros” and “ganos,” which are words for mountain and joy– oregano literally means “joy of the mountain.”

It was revered as a symbol of happiness, and it was an ancient tradition to crown brides and grooms with a laurel of oregano.3 There are over 40 oregano species, but the most therapeutically beneficial is the oil produced from wild oregano or Origanum vulgare that’s native to Mediterranean regions.4

Beware, though, as many of the oregano oils sold in grocery stores are not made from this variety, and may have little to no therapeutic value. Opt only for oregano oil made from Origanum vulgare and Thymus capitatus, a variety that grows in Spain.5

To obtain oregano oil, the dried flowers and leaves of the wild oregano plant are harvested when the oil content of the plant is at its highest, and then distilled.6 The resulting oil is golden to dark yellow, with a strong spicy odor.7

I highly recommend adding oregano oil to your arsenal of natural healing tools, as it has a wide range of uses. This herbal oil is a powerful antimicrobial that can help fight off infections. Oregano oil also has antibacterial, antiviral, and antifungal properties. Other ideal uses for oregano oil are:8

•Treating foot or nail fungus. Put a few teaspoons of oregano oil in a basin of water and soak your feet in it. You can also dilute the oil (mix a drop with a teaspoon of olive or coconut oil), and then apply it on your nails or skin.

•Killing parasites and infections. Dilute the oil (mix a drop with a drop of a carrier oil such as coconut oil), and place it under your tongue. Hold it there for a few minutes, and then rinse it out. Repeat this at least four times a day.

•Alleviating sinus infections and colds. Put a few drops of oregano oil in a pot of steaming water, and then inhale the steam.

I also encourage using the antiseptic powers of this herbal oil to clean your home. Here’s one way how: combine four drops of oregano oil with 10 drops of lemon oil and a quarter-cup of white vinegar, and then add to a bucket of water. Use this mixture to wipe and clean surfaces.9

Oregano oil is high in phenols, which are natural phytochemical compounds with beneficial antioxidant effects. The two most abundant phenols in it are:

•Thymol — a natural fungicide with antiseptic properties. It helps boost your immune system, works as a shield against toxins, and even helps prevent tissue damage and encourages healing.

Other healthful compounds in oregano oil include:10

•Rosmarinic acid — an antioxidant that prevents free radical damage and has shown promise in treating allergic asthma and preventing cancer and atherosclerosis. It also works as a natural antihistamine that reduces fluid buildup and swelling caused by allergy attacks.

•Naringin — inhibits the growth of cancer cells and helps boost the antioxidants in oregano oil.

•Beta-caryophyllin (E-BCP) — this substance inhibits inflammation and is also beneficial for conditions including osteoporosis and arteriosclerosis, as well as metabolic syndrome.11, 12

Oregano oil has wide-reaching health benefits, but is most associated with respiratory and immune system health. It is known for helping prevent and treat infections, such as:

•Yeast infections, even those that are resistant to the commonly used antifungal drug Diflucan.15

•Parasitic infections caused by the amoeba giardia – it was even found to be more effective than antibiotics like Tinidazol.16

•Methicillin-resistant staphylococcus aureus (MRSA) infection — A team of Indian and British researchers found that oregano oil has strong antibacterial properties that can kill this deadly superbug.17

Oregano oil has also shown promise in preventing food-borne illnesses caused by pathogens like listeria,  salmonella, E. coli, and Shigella dysenteria. Adding it to foods not only helps kill the bacteria, but may also alleviate food poisoning symptoms.

An animal study from University of Arizona researchers also found that oregano oil can help kill norovirus,18 which causes gastroenteritis.

Oregano oil is also a prized antiseptic essential oil in aromatherapy because its proportion of phenols is said to be the highest of all aromatic plants. Aside from using the steam method to relieve coughs and other respiratory illnesses, you can also use it to:

•Ward off insects. Carvacrol in oregano oil works as a natural insect repellant. Try putting a few drops on outdoor furniture, or apply a diluted mixture on your skin when heading outdoors.

•Ease sore throat. Simply add a few drops to a glass of water. It can help alleviate toothache as well.

How to Make Oregano Oil

Extracting oregano oil requires a special distillation process. However, there is a simple way to make your own oregano oil at home. Here’s a basic recipe from HomegrownandHealthy.com:21

To preserve the oil, add a few more drops of grapefruit seed oil.

How Does Oregano Oil Work?

The compounds in oregano oil work together to provide the antimicrobial effects this oil is so well-known for. Carvacrol is its most important component, and is responsible for many of its health benefits. Carvacrol has powerful antimicrobial properties, and has been shown to help break through the outer cell membranes that help protect bacteria from your immune system.22

Oregano oil can either be applied topically or ingested, depending on the condition you’re using it for. However, I advise against using the oil full-strength, as it can irritate your skin. Do not apply it to broken skin or open wounds.

Oregano oil is meant for short-term use only and, if using orally, should be taken in small doses of four to six drops for only seven to 10 days.23

Yes it is, as long as it’s diluted in water or with a carrier oil (some of my top choices are jojoba, olive, and coconut oils). Clinical herbalist Michelle Lynde says the ideal ratio when diluting this herbal oil is one part oregano oil to three parts carrier oil.24 I recommend doing a spot test as well to check if you have any allergic reactions to oregano oil. Simply apply a diluted drop on your arm and see if any irritation occurs.

Be careful when buying oregano oil because some manufacturers sell adulterated oils and oils made from thyme, Spanish oregano, or cultivated oregano, which DO NOT provide any health benefits.

Side Effects of Oregano Oil

Some people may experience stomach upset when ingesting oregano oil (or even the herb itself). Those who are allergic to plants from the Lamiaceae family (mint, lavender, sage, and basil) should also avoid this oil, as they may also develop an allergic reaction.

Oregano oil is also NOT advisable for infants and children. Pregnant or nursing women are also discouraged from using oregano oil both topically and orally, as it can encourage blood circulation within the uterus, which deteriorates the lining that encompasses the fetus within the womb. Oregano oil also has a potential to induce menstruation, and may be dangerous to your unborn child.25