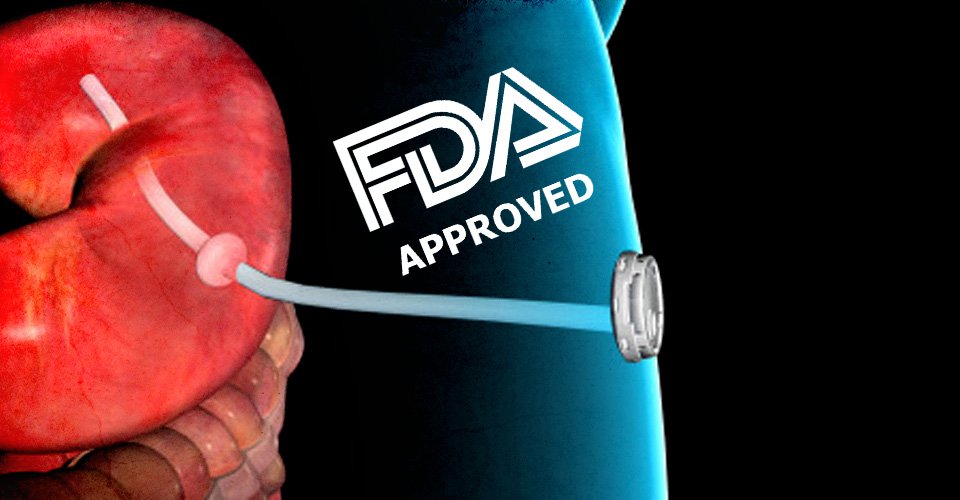 The weight-loss device, AspireAssist, was approved by the FDA last week, and has left more than a few doctors feeling appalled.
Buy an “Intelligence is sexy” t-shirt!

If you haven’t heard of AspireAssist, you might be wondering what the big deal is. What could possibly be upsetting enough to get nearly 1,000 doctors together with a unified purpose of suing the FDA?  The group of 750 doctors, coordinated by Joseph Gutman, an endocrinologist and diabetologist in Pembroke Pines, Florida, want the FDA to take the device off the market. According to these doctors, the device is dangerous- for both mental and physical reasons.

AspireAssist is a weight-loss device unlike any other, and at first glance, it seems to merely be ‘mechanized bulimia.’ The FDA press release describes the process as such: “To place the device, surgeons insert a tube in the stomach with an endoscope via a small incision in the abdomen. A disk-shaped port valve that lies outside the body, flush against the skin of the abdomen, is connected to the tube and remains in place. Approximately 20 to 30 minutes after meal consumption, the patient attaches the device’s external connector and tubing to the port valve, opens the valve and drains the contents. Once opened, it takes approximately five to 10 minutes to drain food matter through the tube and into the toilet. The device removes approximately 30 percent of the calories consumed.”

That’s right, the AspireAssist’s purpose is to remove food you have already consumed via an alternative route to the natural exit port our bodies are equipped with. Bulimia is simply too messy, and can cause catastrophic damage to your teeth and gums. Might as well have an eating disorder the “correct” way- the way in which the FDA can profit.

Joseph Gutman told The Verge, “This is the first time that I looked at a device that was approved by the FDA and I am absolutely, utterly, and totally appalled that it was approved. It is the most pathetic exhibition of ignorance on the part of our agency, the FDA. It is nothing but a bad trick. It’s like a bad joke.”

It’s easy to see why Gutman is concerned. Besides the obvious implications of contributing to a bigger problem, the device has several physical side effects, including death. Merely having the gastric tube implanted can cause “sore throat, pain, abdominal bloating, indigestion, bleeding, infection, nausea, vomiting, sedation-related breathing problems, inflammation of the lining of the abdomen, sores on the inside of the stomach, pneumonia, unintended puncture of the stomach or intestinal wall and death.” The abdominal opening, or port valve, has it’s fair share of horrible risks as well, as does having the port valve removed. Persistent fistula, an abnormal passageway between the stomach and the abdominal wall is just one of those risks.

After only a year of testing AspireAssist with a small clinical trial  of 111 participants, the FDA determined the device to be safe, causing the experts to worry about unknown long-term effects. “There’s no scientific basis in the long term as to what this does,” Gutman says. “The studies are incomplete.”

The company that developed AspireAssist, Aspire Bariatrics, says the device must be accompanied with healthy lifestyle choices in order to properly work. The ‘lifestyle program’ they implement in a mandatory fashion requires that one chews their food 55-75 times before swallowing. They believe this leads to an effect of feeling fuller, sooner, and with less food. In fact, the company says the device won’t contribute to eating disorders because of this one aspect.

Doctors like Gutman are not so easily convinced. “I think that the logic of the device is insane. I don’t think it makes any medical or physiologic sense,” he says. “It’s crazier than Trump for president.”

The FDA, and the companies they approve, make their profit from illnesses- not cures. Eating healthier foods, doing moderate exercise, and yes, even chewing your food more, will help you lose weight. It won’t happen overnight, but nothing worthwhile ever happened instantly.

Currently, there are over 79 million Americans suffering from obesity, so it’s easy to see how something like this could get approved as a ‘medical device.’ Just for a moment though, can we be honest about this whole thing?

We, as a society, have an image problem. We focus more on being thin than we do on being healthy. We want to be liked and loved for who we are, yet we believe our outward appearance reigns supreme overall. We are constant contradictions who lack convictions; following matchstick gods until they burn us all with their flames.

Thanks to Iheartintelligence.com for this article