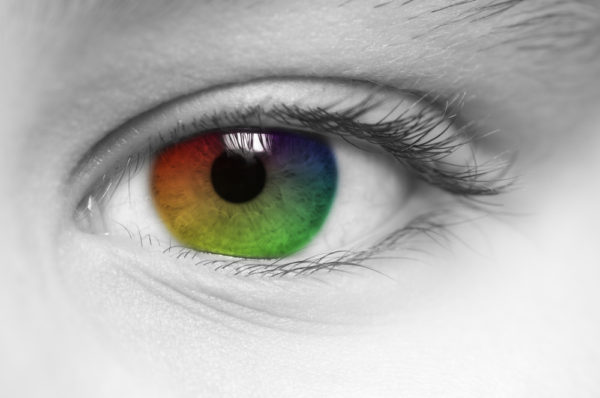 Sam asks: If you gave a color blind person something like LSD or some other sort of hallucinogenic drug, would they see colors they couldn’t before? 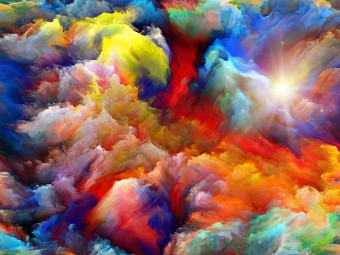 First a little primer on colour blindness from the good people atColorBlindAwareness.org:

Most color blind people are able to see things as clearly as other people but they unable to fully ‘see’ red, green or blue light. There are different types of color blindness and there are extremely rare cases where people are unable to see any colour at all.

The ability to see colours is entirely due to certain photoreceptors called “cones” located in your eyeballs. Normal eyes contain three distinct kinds of cones that work together to perceive colours. However, in people with colour vision deficiency (CVD):

…usually there is something wrong with one of those different cone types. Either they are faulty or missing… This means you still can see colors but less. Maybe less diverse, less shades, less colors and definitely less colorful.

Interestingly, there is a great deal of crossover in how people affected by protanopia (red light dichromacy) and deuteranopia (green light dichromacy) see the world, as such “red/green colour blindness” is often used as a catchall term. As a side note, this is also by far the most common kind of CVD.

So what happens when people suffering from one of these conditions takes hallucinogenic drugs? Well, the annoyingly curt answer is that it depends. For example, as we’ve discussed before, even people who are totally blind are able to “see” things in their dreams so long as they haven’t been blind since birth. In a similar fashion, certain blind people are able to experience visual hallucinogenic trips when they take psychedelic drugs.

We know this because, among other studies, in 1963, Dr Alex E. Krill et al published a paper, Effects of a Hallucinogenic Agent in Totally Blind Subjects, in which they gave a group of 24 “totally” blind people LSD in an attempt to prompt them to experience visual hallucinations of some kind. The experiment, though small in sample-size, did show that, as with blind dreaming, “Such phenomena (hallucinations) occurred only in blind subjects who reported prior visual activity…”

So that’s blind people.  How about people with CVD? It seems no one has yet done a scientific study covering this, or at least not published or translated it into English.  Without that, what we have to work with to answer this question is, unfortunately, anecdotal evidence and a bit of conjecture.

We found numerous accounts from supposed CVD individuals during the course of researching this one; the most reputable of which can be found in The Erowid Experience Vaults, dedicated to cataloguing the varying responses people have to “psychoactive plants and chemicals.” In it, they state,

There are a handful of case reports of people with color blindness finding that LSD altered their perception of color for the duration of the effects.

If, like we were, you’re initially a little sceptical of Erowid’s legitimacy, we should point out the website currently has over 100,000 different entries and that reports submitted take an average of about 6 months to be published after they are reviewed for accuracy and credibility. Further, Erowid is pretty extensively referenced in scientific papers, including ones published in extremely reputable medical journals… So, that’s something I guess- still not a fan of anecdotal evidence, but here we are.

So what did the reviewed submissions on Erowid say?  Here are a couple of the most pertinent for your reading pleasure:

I am red green colorblind. I don’t see in black and white but I cannot distinguish two colors of similar shades and I miss almost every number in the colorblindness test with the colored dots at the optometrist’s (eye doctor).

Since I have done psychedelics, especially LSD and AMT, colors have become sharper and brighter and I can more easily distinguish similar shades in bright and pastel colors, but darker colors such as dark blue and purple, have become more difficult to distinguish because they seem to morph into each other. I do see all the colors and patterns very vividly when I trip and it seems I can more easily see them than can the people I trip with, most of the time I still see stuff after everyone else has come down. I can’t tell you if the colors and patterns are the same as people with normal vision, because I don’t know what normal vision is. Since I have tripped I have visited the optometrist once and got 8 of 15 numbers right in the colorblindness test when before I would only get 3 at the most.

…the arrival of dawn heralded the greatest visual experience I could have ever imagined; For the first time in my life, I saw colour.

I am at the extreme end of the colour blindness scale, not quite monochrome, but close enough for me to misinterpret all but the most vivid of colours. Yet under the influence of LSD, my colour perceptions began to heighten. At first, I put this down to mere visual hallucinations, but steadily I began to notice, for the first time a difference in appearance between the leaves of a tree and its bark. Attempting to study this difference was at first difficult, due to the fact that the leaves were consistently changing into birds, faces, cakes, kites, etc… Once I had become accustomed to the intensely visual nature of the drug, I started to explore my surroundings in more depth.

Until this point, I had always relied upon the shade of an object to determine its colour; placing it into a ‘grouping’, such as red/green/brown, blue/purple/pink, orange/yellow/light-green and so on. During my LSD experience, it began to determine between what I can only describe as the ‘hues’ of colour. My inability to be any clearer is not due to lack of observation, but due to lack of reference point. Indeed, during one moment of intense elation, I remember giggling wildly, weeping at nature’s real beauty and talking directly to the colours saying, ‘I can see you, but I don’t know what to call you…!’

…I decided to calm down a little and begin a serious study of the effects upon my colour perception. Therefore, I initiated my friend into my experiments and we began testing with whatever was available. The most bizarre element to these experiments was the need to spend an hour learning all of the colours from scratch. Once I had a visual reference point, he tested me with various items, such as coloured pencils, leaves and magazines. We even attempted an online Ishihara Test for Colour Blindness, once we had retired indoors, but this was not successful due to the fact that the dots continually morphed into one another.

After several hours, my friend, who has unimpaired colour vision, determined that I could indeed see colour…

Other anecdotal evidence we came across has many reporting visual hallucinations, but not in any different colours than they normal see. This is why we brought up the example of some “totally” blind people being able to experience dreams and hallucinations; in those cases the blind people were only able to do so because they had an ingrained, earlier memory of what colours and shapes actually looked like. Their brains had a reference point. Most people suffering from CVD have no such luxury since the condition is often present from birth.

So for many their minds would be unable to “invent,” say, green the same way a person who is completely blind from birth can’t conjure up an image of a demonic goat monster playing the saxophone or other such common visual imagery that we of the seeing persuasion are so familiar with.

But there are a few anecdotal cases where some, like those above, report seeing colours they couldn’t before.  There are people out there who become affected with CVD later in life, even sometimes not actually remembering having been able to see certain colours; Shaken Baby Syndrome, direct damage through the eye, degenerative eye diseases, and side effects from certain medications are just some of the many ways one can have been born with normal colour perception and potentially lose it without ever knowing one had it, depending on when the loss occurred.  You could even potentially lose it as a child or even a teen and might not realise this if it happens gradually enough.  So it’s possible in at least some of the anecdotal cases where the individual believes they are seeing some colour for the first time, it is because of this- similar to blind individuals who could see when they were born. Their brains have a reference, even if they aren’t conscious of it.

As for being able to identify colours consistently as described in the latter anecdotal story above, on the surface at least,this would seem  somewhat unlikely given their eyes would suddenly have to start working in a way they’ve never worked before.  Though certain Robins can see magnetic fields, humans don’t have the ability.  When you take a hallucinogenic drug, you may *think* you can see magnetic fields, but it’s going to be all in your head and the fields won’t be an accurate representation of the actual magnetic fields around you.

That said, in certain individuals, it may be that the specific underlying cause of their colour blindness is such that the photoreceptors are there, just not working properly and that some hallucinogenics may facilitate the photoreceptors working (or being more sensitive), whether temporarily or apparently more permanently, as in the first story above, assuming it’s true.  This doesn’t seem too farfetched given that hallucinogens seem to affect serotonin receptors, which in turn affect the release of numerous neurotransmitters. It’s possible at least, though I’ll leave it to neurologists to say just how likely (or not) this is.

It is known that “some users of LSD may have a sustained or irreversible impairment in colour discrimination.”  So we do know it can go the other way. And from this, and several other studies, that the specific nerves in question are being affected.

In the end, as no one has yet done a scientific study on colour blindness and hallucinogenic drugs, it’s hard to come up with a definitive answer for this one.  Based on the studies done on blind people taking hallucinogens, it would seem likely that for many colour blind people who at some point earlier in their lives had seen certain colours, they later in life would be able to see these colours again when hallucinating.

But, as noted, there are some individuals who claim they can see colours they hadn’t before.  During the course of our research, we were even able to find a documented instance of a guy with red/green CVD being able to see properly again after (accidentally) smashing his face into the floor. This obviously won’t work for the vast majority of others with CVD; but it may be that some individuals who have all the necessary hardware, so to speak, but not working properly, are able to temporarily “switch” the hardware on or make the receptors more sensitive with hallucinogens.  But we’ll wait until someone does a study on this to give a more definitive answer. If the first story above really is true, it would seem that someone really should be researching this as a potential cure (or starting point for a cure) for colour blindness in some individuals.

On that note, if you’re a colour blind person who has taken hallucinogenic drugs (not that we’re advocating it by any means), or someone who has particular expertise in this subject, and you want to chime in, please do so in the comments below.  One of the rare instances where we’ll (temporarily) settle for some anecdotal evidence until someone starts giving CVD individuals hallucinogens, FOR SCIENCE!