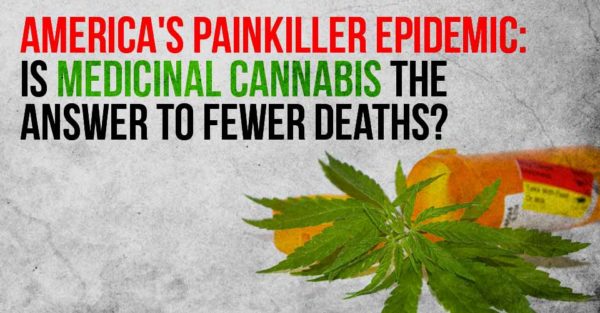 The addictions and deaths related to prescription drugs has become a troubling issue in America. Since 1991, the amount of deaths caused by opioids has increased by 300%, and in 2012 over 259 million prescriptions for painkillers were written- that’s enough for every adult in America to have a bottle of pills.
Buy an “Intelligence is sexy” t-shirt!

Despite those statistics, thirteen states experienced a dramatic decrease in opioid-related mortality rates. It just so happens those thirteen states have enacted medicinal cannabis laws as well.

A study published in JAMA Journal of Internal Medicine examined the relation between states with established medicinal cannabis laws and lowered opioid overdoses. They found that the states with legal cannabis laws (California, Oregon, Washington, Alaska, Colorado, Hawaii, Maine, Michigan, Montana, Nevada, New Mexico, Rhode Island, and Vermont) had a 25% decrease in prescription painkiller deaths. 25%… That’s a lot when you consider 46 people die every day in the United States from this type of overdose.

The researchers believe that the reason for the reduction in deaths is obvious- patients use marijuana to treat their pain, either on it’s own or to supplement opiates. This leads to a lower dosage (or none at all) of a potentially addictive and fatal drug.

The study concludes, “Medical cannabis laws are associated with significantly lower state-level opioid overdose mortality rates.”
Cannabis has the Ability to Replace Viagra, but No One is Talking About It

Sounds pretty cut and dry, right? Well, not everyone thinks so.

The chief medical officer at Phoenix House, Dr. Andrew Kolodny, thinks the findings are hogwash. He believes there is no relation to medicinal cannabis and a reduced amount of deaths by overdose. His reason is simple: Marijuana is not widely prescribed for chronic pain.

“You don’t have primary care doctors in these states [prescribing] marijuana instead of Vicodin,” he told Newsweek. Kolodny believes that although medicinal marijuana may be prescribed by a small subset of doctors, it’s not a large enough number. Therefore, that more-than-likely wouldn’t explain the huge decrease in opiate-related overdose deaths.

Whatever the reason, I’m glad something is happening. The overwhelming amount of information that is available on this subject makes one wonder how the problem got this bad. Even though different states have started to put policies in place to curb the over-prescribing of opiates, some people, even doctors, feel it’s simply not enough.

Dr. Laxmaiah Manchikanti, of the Pain Management Center of Paducah, contributed to a study on the opioid epidemic in America. He states, “The position of the pharmaceutical companies is based on unsound science and blatant misinformation, and accompanied by the dangerous assumptions that opioids are highly effective and safe, and devoid of adverse events when prescribed by physicians.”
Studies Find Psychoactive Drug Safer Than Alcohol When Driving

He goes on to say, “It has also been illustrated that opioid analgesics are now responsible for more deaths than the number of deaths from both suicide and motor vehicle crashes, or deaths from cocaine and heroin combined. A significant relationship exists between sales of opioid pain relievers and deaths.”

These deaths are unnecessary. Opioid addiction and overdose is a serious topic that needs to be addressed as such. If the problem lies within the structure of the system, then the system needs to change. And if medicinal cannabis is even slightly helpful in the reduction of prescription overdose deaths, I say we try it.

What are your thoughts on this subject? I’d like to hear what you guys think about this.

*Note* If you or someone you know is going through an opiate addiction and would like to get help, please don’t be afraid to talk to someone. There are a lot of people out there suffering with the same problem and they’re looking for help too. Talk to a doctor, or call an anonymous helpline.