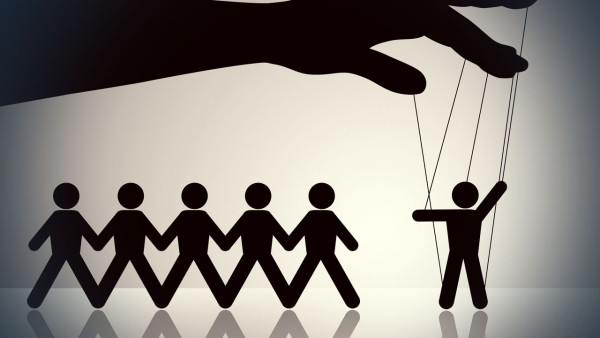 There are a lot of phenomenal studies on the traits and characteristics of psychopaths. For professional research, check out Cleckley’s criteria or Hare’s psychopathy checklist. A quick Google search ought to do the trick. The red flags in this book are intended to supplement those resources.

So what’s different about this list? Well, for one, it’s specifically about relationships. But it’s also about you. Each point requires introspection and self-awareness. Because if you want to spot toxic people, you cannot focus entirely on their behavior—that’s only half the battle. You must also come to recognize the looming red flags in your own heart. Then, you will be ready for anything.

1. You feel on-edge around this person, but you still want them to like you. You find yourself writing off most of their questionable behavior as accidental or insensitive, because you’re in constant competition with others for their attention and praise. They don’t seem to care when you leave their side—they can just as easily move on to the next source of energy.

2. They withhold attention and undermine your self-esteem. After first hooking you with praise and flattery, they suddenly become reclusive and uninterested. They make you feel desperate & needy, ensuring that you are always the one to initiate contact or physical intimacy.

3. Plasters your Facebook page with compliments, flattery, songs, and poems. They text you dozens, if not hundreds of times per day. You come to rely on this over-communication as a source of confidence.

4. Quickly declares you their soul mate. And for some reason, you don’t find it creepy. They tell you how much they have in common with you. On the first few dates, you do most of the talking and they just can’t believe how perfect you are for them.

5. Compares you to everyone else in their life. Ex-lovers, friends, family members, and your eventual replacement. When idealizing, they make you feel special by telling you how much better you are than these people. When devaluing, they use these comparisons to hurt you.

6. Lies & excuses. There is always an excuse for everything, even things that don’t require excusing. They make up lies faster than you can question them. They will always blame others—it is never their fault. They spend more time rationalizing their behavior than improving it.

7. No startle response. Total absence of anxiety, fear, and worry where there otherwise should be. They are also very easily bored by the familiar. You write this off as calm and cool, often feeling inferior and over-sensitive because you have normal human emotions.

8. Insults you with a condescending, joking sort of attitude. Smirks when you try to express yourself. Teasing becomes the primary mode of communication in your relationship. They subtly belittle your intelligence and achievements. If you point this out, they call you hypersensitive and crazy.

9. Uses social networking to provoke jealousy and rivalries while maintaining their cover of innocence. They once focused all of their attention on you, but now they post ambiguous videos and statuses to make you doubt your place in their heart. They bait previously denounced exes with old songs and inside jokes. They attend to new activity and ignores yours.

10. You find yourself playing detective. It’s never happened in any other relationship, but suddenly you’re scrolling back years on their Facebook page and albums. Same with their ex. You’re seeking answers to a feeling you can’t quite explain.

11. Surrounds themselves with former lovers and potential mates. Brags that their exes still want to sleep with him/her, but assures you there is nothing to worry about. These people make you feel jealous and give off the perception that your partner is in high-demand.

12. Hyperbolizes emotions while displaying none of them. They make passionate statements like “I’ve never felt so happy in my life” in a completely robotic voice. It sounds like an alien trying to explain how they imagine human emotions might feel.

13. You are the only one who sees their true colors. Others will think they’re the nicest person in the world, even though they are used for money, resources, and attention. They won’t care because he/she strategically distracts them with shallow praise (often done over social networking). Psychopaths are able to maintain superficial friendships far longer than their relationships.

15. Cannot put themselves in your shoes, or anyone else’s for that matter. You find yourself desperately trying to explain how they might feel if you were treating them this way, and they just stare at you blankly.

16. You are engaged in constant conversations about their ex. You know them by name, and you know everything about their relationship—at least, your partner’s version of events. The ex becomes one of the most frequent topics of discussion in your relationship.

17. You find yourself explaining the basic elements of human respect to a full-grown man/woman. Normal people understand the fundamental concepts of honesty and kindness. No adult should need to be told how they are making other people feel.

18. Focuses on your mistakes and ignores their own. If they’re two hours late, don’t forget that you were once five minutes late to your first date. If you point out their mistakes, they will always be quick to turn the conversation back on you.

19. Suddenly and completely bored by you. Gives you the silent treatment and becomes very annoyed that you seem to be interested in continuing the passionate relationship that they created. You are now a chore to them.

20. The ultimate hypocrite. They have extremely high expectations for fidelity, respect, and adoration. After the idealization phase, they will give none of this back to you. They will cheat, lie, insult, and degrade. But you are expected to remain perfect.

21. Sometimes it seems as though they’ve forgotten who they’re supposed to be around you. They adopt different personas for different people—transforming their entire personality to match various audiences. It’s always very eerie when they slip and accidentally use the wrong mask for you. You will start to feel that their personality just doesn’t seem to add up.

22. An unusual amount of “crazy” people in their past. Any ex-partner or friend who did not come crawling back to them will likely be labeled jealous, bipolar, an alcoholic, or some other nasty smear. They will speak about you the same way to their next target.

23. Flatters your deepest insecurities. If you’re self-conscious about your looks, they’ll call you the sexiest person in the world. If you’ve got a need to entertain, they’ll say you’re the funniest person they’ve ever known. They will also mirror your greatest fantasies, playing whatever role is necessary to win your heart.

24. Frequently comments about what you’re wearing and how you look. They try to arrange you. You become obsessed with your appearance, noticing flaws that likely don’t even exist. During and after the relationship, you will spend significantly more time in front of the mirror. (Thank you to our member, ckwanderlust, for these valuable insights).

25. You fear that any fight could be your last. Normal couples argue to resolve issues, but psychopaths make it clear that negative conversations will jeopardize the relationship, especially ones regarding their behavior. You apologize and forgive quickly, otherwise you know they’ll lose interest in you.

26. Obsessed with humiliating successful, kind & cheerful people. Delighted by the idea of breaking up friendships and marriages. If you work hard to maintain interpersonal peace in your life, they will make it their mission to uproot all of it.

27. Gaslighting. Blatantly denies their own manipulative behavior and ignores evidence when confronted with it. They will become angry if you attempt to disprove their delusions with facts.

28. They expect you to read their mind. If they stop communicating with you for several days, it’s your fault for not knowing about the plans they never told you about. There will always be a self-victimizing excuse to go along with this.

29. Selfishness and a crippling thirst for attention. They drain the energy from you and consume your entire life. Their demand for adoration is insatiable. You thought you were the only one who could make them happy, but now you feel that anyone with a beating pulse could fit the role. However, the truth is: no one can fill the void of a psychopath’s soul.

30. Your feelings. After a run-in with a psychopath, you will feel insane, exhausted, drained, shocked, suicidal, and empty. You will tear apart your entire life—spending money, ending friendships, and searching for some sort of reason behind it all.

You will find that normal, loving people do not raise any of these flags. After an encounter with a psychopath, most survivors face the struggle of hypervigilance: who can really be trusted? Your gauge will swing back and forth for a while, like a volatile pendulum. You will wonder if you’ve gone absolutely mad—wanting to believe the best in an old friend or a new date, but feeling sick to the stomach when you actually spend time with them.

Developing your intuition is a personal process, but I would leave you with this: the world is mostly full of good people, and you don’t want to miss out on that because you’ve been hurt. Spend some time getting in touch with your feelings. Keep tweaking until you find a comfortable balance of awareness and trust. Look within and understand why you felt the way you did. You will discover that many old relationships may need revisiting. And as you begin to abandon toxic patterns, healthier ones will inevitably appear in their place.

To quote a longtime member & friend, Phoenix, you will stop asking “Do they like me?” and start asking “Do I like them?”