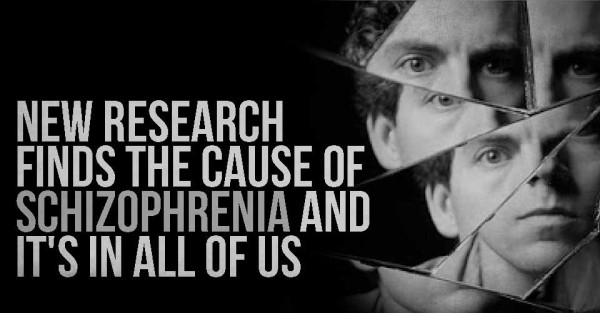 Understanding causation and the biology behind schizophrenia has been a mystery with seemingly endless possibilities- until now, thanks to Harvard geneticists.

Dr. Steven McCarroll, along with several of his colleagues, analyzed the genomes of 64,000 people. Almost 50% of them were diagnosed with schizophrenia. This analytical study has led them to believe that the cause of the disorder can be found in one particular area of the human genome, MHC.  MHC or major histocompatibility complex, is a “set of cell surface proteins essential for acquired immune system to recognize foreign molecules in vertebrates, which in turn determines histocompatibility.”

“[MHC] has hundreds of genes, most of which contribute to the immune system,” McCarroll told CBC News, adding there had been clues immune system genes were connected to schizophrenia, but no one really knew which ones.
Read: 6 Mental Habits that Make You More Susceptible to Feeling Depressed

“So for a while, people assumed that this genetic signal was pointing to some virus or critter or something like that, that somehow gets into the brain,” he said.

McCarroll explained that a student who was using his lab started to look at available data in a new way; he discovered a molecule connected to the immune system had more than one function. The secondary purpose of this molecule guides the wiring of the brain at apposite times through eliminating specific synapses that aren’t being used as much as others.
One of those times happens between the ages of 17 and 25 when the synapses go through a “pruning” phase. This also happens to be around the time when schizophrenic disorders start to emerge.
Read: Revolution for Type 1 Diabetes: The Artificial Pancreas Project

“It’s always been a mystery: why then? Why not earlier and why not later?” McCarroll said. “On some level, as a model or explanation, this makes much more sense because it connects the disease to a normal developmental process that … in about one per cent of the population, somehow goes awry or out of control.”

McCarrol contributed his findings to an article published in the journal Nature, which says, “The possibility […] that schizophrenia arises or intensifies from excessive or inappropriate synaptic pruning by microglia during adolescence and early childhood would offer potential mechanism for these longstanding observations about age of onset and synapse loss.”

McCarroll believes this new discovery will help to pave the way for treatment of the underlying causes of schizophrenia, rather than the most pronounced symptom of psychosis.

Understanding which areas of the brain, and what genetic biological contributors are key elements in the development of schizophrenia is a mighty first step in developing new medicines.

The work of McCarroll and his colleagues was published on Jan. 27 in the journal Nature.