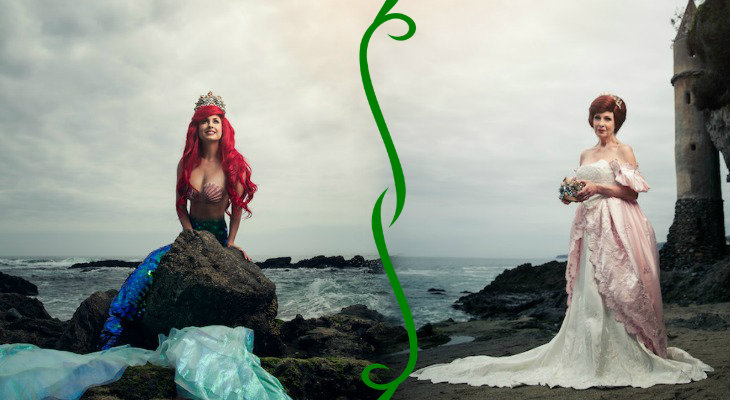 This designer and photographer duo are showing us what our favorite Disney Princesses would look like AFTER their happily-ever-afters.

I know, I know. Disney Princesses reimagined isn’t exactly something we haven’t seen before. But one thing we never really get to see is what happens AFTER the happily-ever-after. What happens when our beloved Ariel, Belle and the gang grow into older, yet no less beautiful queens? Luckily for us diehard Disney fans (I know I’m not the only one here!) costume designer, Nephi Garcia, and photographer, Tony Ross, recently teamed up for a gorgeous photo series colab that answers that very question!

The duo rounded up five lovely young ladies and their real-life mothers to assume the characters of Disney’s most beloved princesses turned queens. This first image of the series, shown above, shows the creative pair’s interpretation of Ariel. If you think that’s beautiful, just wait until you see the Little Mermaid all grown up!

Queen Ariel shows us that even in her twilight years, she is still the sweet-natured red head we came to love in the Little Mermaid, only this time with a touch more wisdom and maturity.

Gracia and Ross decided to create this photo series in celebration of Mothers’ Day, which is why the models they chose also happen to be real-life mothers and daughters. The resemblance is so clear, especially with Belle and her older-self.

Here is the ever so beautiful Belle as reimagined by Garcia and Ross. Personally, I think this young lady could give Emma Watson a run for her money as the iconic princess from Beauty and the Beast! But if you think she looks lovely, just wait until you see her mother as the regal Queen Belle….

What was particularly touching about this project was that each image was accompanied by a letter or poem from the model to her mom which can be found on the designer’s website. For the ladies recreating Belle’s look, the young Belle wrote to her real-life mom, “Linda, ‘it’s no wonder that her name means beauty.” And as fate would have it, she went on to model as Queen Belle, whose name also means beauty!

This time, Snow White was played by a daughter-in-law/mother-in-law pair. But I have to say, they could easily be mother and daughter! That is why they filled the roles of both the princess and queen versions of this classic Disney character perfectly.

I’m really starting to obsess over Garcia’s costume designs here. The contrast between the simple princess looks and the more detailed, regal Queen designs are truly something to marvel at! Have a look at Cinderella to see what I mean…

I love this slightly more whimsical take on Cinderella. This time, the designer chose to deviate from the traditional Disney Cinderella attire in favor of this sweet, flowing pink dress. With Queen Cinderella, however, we are treated with the powder blue synonymous with the classic Disney princess.

Queen Cinderella is yet another beautiful princess all grown up! She looks glowing and gorgeous, just as we knew she would. But if you think Cinderella looks lovely, just wait until you see Mulan!

Finally, we are treated with my personal favorite, Mulan. Not only did the model capture the essence of this princess perfectly through her telling facial expression, but her simple costume is perfect for this Disney re-creation. I just love the final dress worn by grown-up Queen Mulan.