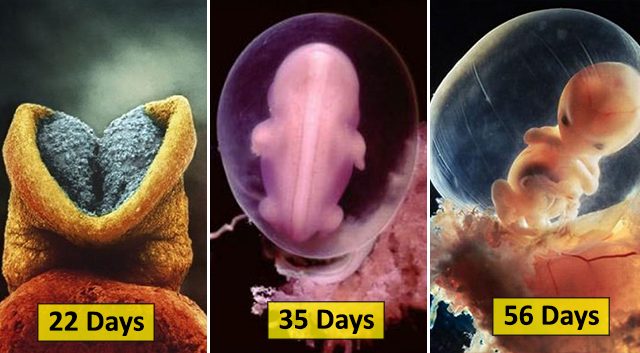 Renowned photographer Lennart Nilsson documented the incredible developmental process of the human embryo over 10 years of careful observation from conception to birth.

Lennart Nilsson was first featured in LIFE magazine in 1965, when his photos exhibiting human embryos were published. The shots were instantly reproduced in ‘Stern’, ‘Paris Match’, ‘The Sunday Times’, and other publications.

At five weeks, the foetus is 9 millimeters long; it’s already possible to see the face with its openings for the mouth, nostrils, and eyes.

40 days of development. The exterior cells of the foetus join with the loose surface of the uterus wall to form the placenta.

At 8 weeks of development.

10 weeks. Its eyelids are already half open. Within several days they will be completely formed

At 10 weeks, the embryo already uses its hands to study the environment.

The lines of blood vessels are visible through its skin.

18 weeks. The foetus can now detect sounds from the outside world.

20 weeks. The foetus is now 20 centimeters long. Hair starts to appear on its head.

Nilsson’s book, ’A Child is Born’, was published in 1965. It sold out and has been republished many times, becoming one of the most popular photography books of all time.