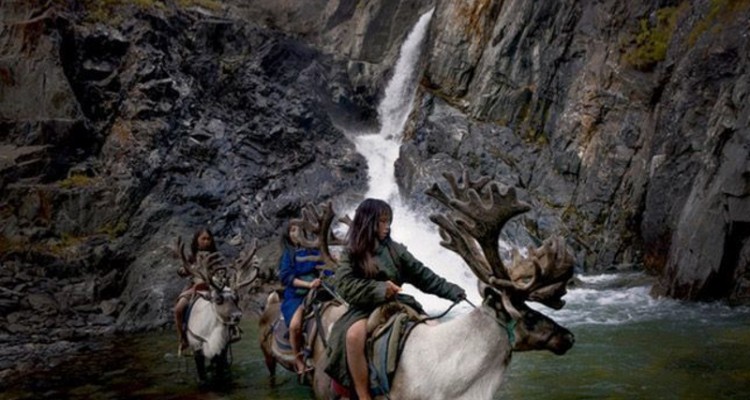 The Dukha people of Northern Mongolia share a fascinating connection with the region’s animals and landscape, the type of bond the world needs to remember exists.

When one first glimpses the photos below, they’re struck with a profound sense of awe and wonder. Surely, such a tribe couldn’t exist – one that naps with reindeer and trains wolves to hunt for them, right?

Well, modern man in his limited thought might not be able to conjure such a way of living, but to the Dukha people in Mongolia, such is a well-accepted way of life.

As The Plaid Zebra shares, the nomadic Dukha people of Northern Mongolia share a fascinating connection with the region’s animals and landscape. Embracing the rugged terrain, they’ve made a life herding and riding reindeer, training wolves, and teaching golden eagles to hunt for their clan.

As the photos captured by photographer and researcher Hamid Sardar-Afhami convey, they have a lot – in spirit and in health – to show for such efforts.

The tribe’s intimate relationship with the reindeer affords them many benefits. The Dukha not only use animals as hunting steeds and use their milk to make cheese, they procure an extra income through tourism by offering reindeer rides, crafts and performances to travelers.

The Dukha people also hunt rabbits with the assistance of their highly-trained wolves and golden eagles, which they are able to trade for about $2 (USD). Wild elk and boar are also hunted by the tribe.

At present, only about 44 Dukha families remain, which amounts to about 200-400 people. Even the reindeer have diminished in population, with only about 600 currently living.

Sardar-Afkhami, who carries a Harvard Ph.D in Sanskrit and Tibetan Studies, documented the Dukha people in his 10-year journey through Tibet and the Himalayas.

Some of his striking photos of the enchanting Dukha people follow:

If you are interested in learning more about the Dukha people, watch The Reindeer People created by Sardar. In the film, he documents the seasonal migrations of one family as they “move with a herd of about a hundred reindeer through a sacred forest inhabited by the spirits of their ancestors, who communicate to the living through songs.”