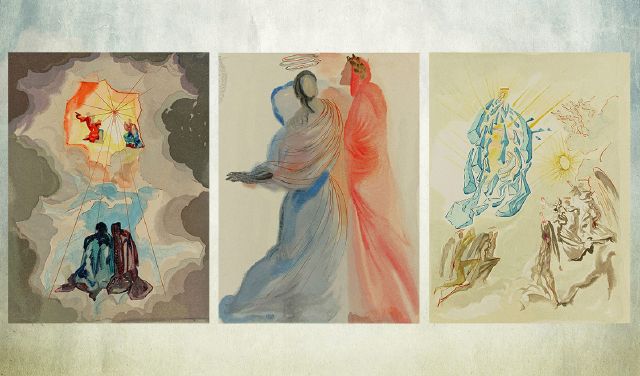 Dalí gave us beautiful renditions of Alice in Wonderland in 1969, and Romeo and Juliet in 1975. But before those, in 1964, Dali completed his vision of Dante’s Divine Comedy.

William Blake worked on his illustrations of Dante’s Divine Comedy until he died, in 1827. More than a century later, at the height of his fame, Dalí started working on a collection of 100 paintings based on the same subject. The work was commissioned by the Italian government, who gave Dalí  8 years to complete the series of illustrations.

In 1965 the limited-edition prints were set to be released for the 700th anniversary of Dante’s birth. But the public wasn’t too happy when they discovered that one of Italy’s most notable literary legacies had been left to a Spaniard, and the government eventually pulled out.

Dalí wasn’t concerned with who wanted it done and who wasn’t paying for it. He decided that he would continue to complete the series in 1964 on his own. He employed the assistance of two engravers who spent 5 years carving 3,500 wooden blocks by hand that were to be used for reproductions of Dalí’s paintings.

If you have a few hundred thousand dollars to spend, you can purchase a few reproductions of the individual paintings online. There was also an obscure out-of-print book released by the Park West Gallery that contains some of these illustrations.

If you would like to see William Blake’s take on Dante’s Divine Comedy, you can find that here.