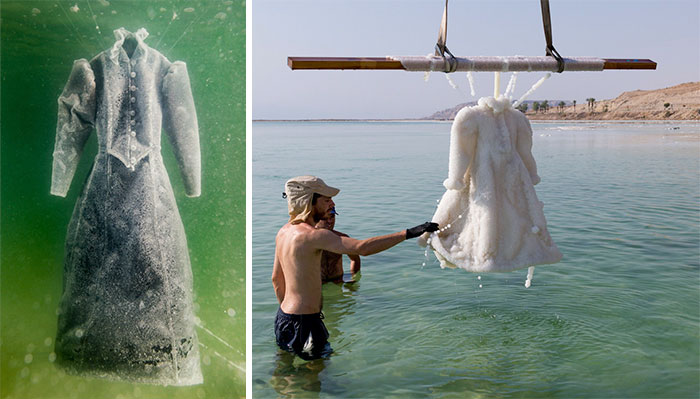 Israeli artist, Sigalit Landau, has taken the world by storm with her latest project.

What might sound like something simple, actually turned out to be something remarkably stunning! Landau made an artistic choice to submerge a black gown in the Dead Sea.

Two years ago, in 2014, she decided to place the dress in the salt-rich waters of the Dead Sea. Now, in 2016, the gown has been carefully extracted to put on display.

As you can see below, these remarkable pictures show us that the final result is nothing shy of magical.

Dybbuk revolves around a young Hasidic woman. In short, her body becomes possessed by the spirit of her deceased lover. The salt-encrusted gown Landau used for her art project is a replication of the one worn in the 1920s production.

Photos were taken of the gown in 3-month intervals, when Landau wanted to check its status. She took these photos so she could capture the gradual process of salt becoming crystalised on the dress. These pictures below also show you that process.

The entire series can also be seen at London’s Marlborough Contemporary, where they are on display until September 3rd of this year.