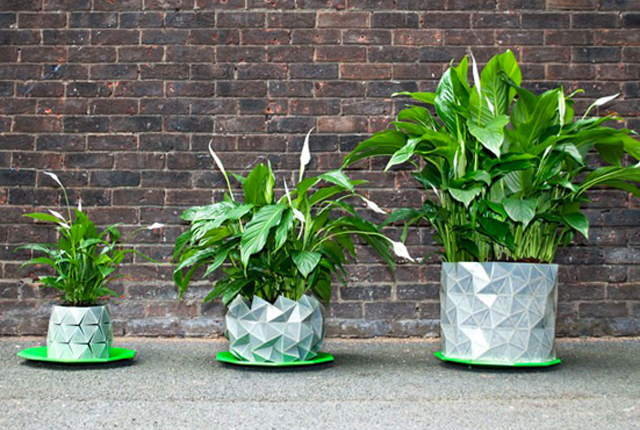 London-based designers have invented an ‘origami’ pot that grows with your plant!

Gardeners with green thumbs know that as a plant grows, it will at some point need to be transferred to a larger container. But thanks to London-based designers Studio Alaskan, a solution to this inconvenience now exists: an origami-based pot that evolves with the plant over time.

Called GROWTH, the shape-shifting object is no doubt the perfect companion to a plant as it grows from seedling stage to full maturation.

As shared on MyModernMet, Studio Ayaskan feels that nature’s self-sustaining qualities are often at odds with humans and our manufactured merchandise. Our race tends to be proud about producing things, using them until they’ve been exhausted, and later discarding them in favor of newer items. In nature, however, everything adapts, grows, dies, and is eventually reused to form new life.

“Nothing stands still. Everything flows,” the designers explain.

In order to create the ‘origami’ pots, GROWTH uses a carefully calculated pattern to mimic what nature has mastered. As you can see in the photos, the pot transforms with the plant, something not usually witnessed in inanimate objects.

In nature, everything evolves, adapts, grows, blooms, degrades, dies, gets absorbed, reused,” the designers, Bike and Begum Ayaskan, told Contemporist. “The modern approach to building is the opposite. Here, things exist in stages: objects are produced, used, discarded… Growth, through it’s carefully calculated origami pattern, mimics nature’s ability to grow and transform by unfolding over time, bringing these qualities to the manufactured object.”

Written by Amanda Froelich
Thanks to True Activist for this article