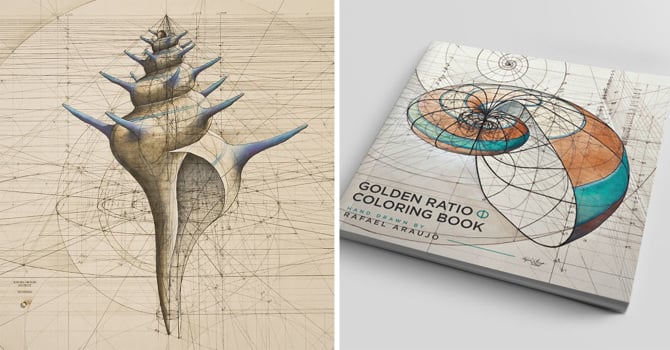 The Golden Ratio is found in almost every aspect of nature, and now you can find it in one of the most elaborate colouring books ever created.

Rafael Araujo has beautifully fused art with science, in his hand-drawn Golden Ratio illustrations. It has taken over 40 years for the Venezuelan architect and artist to perfect his intricate drawings. Using only the bare essentials (pencil, compass, ruler, and protractor) Araujo created drawings which depict the natural mathematical brilliance of our world. He has recently started compiling his best pieces into a colouring book for adults in hopes to reconnect humans with the magic of nature.

Araujo’s illustrations focus on intelligent patterns of growth that are governed by the Golden Ratio. This is a special number commonly annotated with the Greek letter Phi (ϕ), and is equal to 1.618. The Golden Ratio can be seen in various natural spirals, sequences, and proportions.

“Phyllotaxis” is the name given for the tendency of organic things to grow in spiral patterns, and we see this occurrence every day in things like seashells, leaves, and even in the spiraling shape of some galaxies. This number pattern reoccurs so frequently in nature that many researchers have deemed it a universal law for absolute perfection of structures, shapes, and proportions. From the smallest snail shell, to the largest galactic formation, Phi can be found time and time again.

Applying the Golden Ratio to his illustrations and allowing the construction lines to remain in the final images allows Araujo to create designs that clearly revolve around this Fibonacci framework. Each composition is painstakingly detailed, and it can take the talented artist up to 100 hours to complete a single piece.

Araujo has a successful Kickstarter campaign under way, and hopefully his colouring book that celebrates this sacred geometric pattern will be available to the world very shortly.