Creativity at its finest. What better way to turn something unusable into something magical?

Chances are, if you were born before 2010 you probably have a few CDs just lying around, full of scratches, and you likely don’t even enjoy the same music anymore. What to do with the shiny disks gathering dust…

Instead of tossing them into the trash like most of us would do, one artist decided to do something truly incredible.

South Africa-born, Australia-based artist Sean Avery glues CD shards to wire mesh frames shaped like animals. Avery uses kitchen scissors to cut out the shapes he needs, and then arranges them by color and size.

“I then hot glue those shards one-by-one to a wire mesh frame (that I shape by hand) to create a natural fur/feather pattern,” says Avery on his website. “My sculptures usually take a week to make, maybe longer depending on how motivated I am to get them done!”

He is a teacher, writer-illustrator, sculptor and designer. What a list of talents!

Locally, he’s best known as the writer-illustrator of well-loved children’s picture books, All Monkeys Love Bananas and Harold and Grace published by Fremantle Press. Internationally, he’s best known as a sculptor who uses CD’s and DVD’s to create breath-taking works of art that reside in galleries and private collections all around the world.

From his website, you can learn a lot about Sean and his inspirations.

“Sean’s reputation as an internationally acclaimed artist has come from his work as a sculptor specializing in re-purposing electronic waste. His most popular sculptures feature deconstructed CD’s and DVD’s, which he has re-built into organic shapes. Birds and small mammals have been his most popular subjects.”

“Photos of Sean’s sculptures have featured in print and screen publications all around the world and many galleries and private collectors have commissioned him to build unusual and exciting pieces for them. Some of these commissions have gone to Ripley’s Believe It Or Not!, Scitech, Woodside Oil and Gas and Nespresso to name a few. In 2014, Sean went to represent Australia at the International Waste To Art exhibition in Baku, Azerbaijan.”

Check out some of our personal favourites below and let us know which ones you enjoy the most. 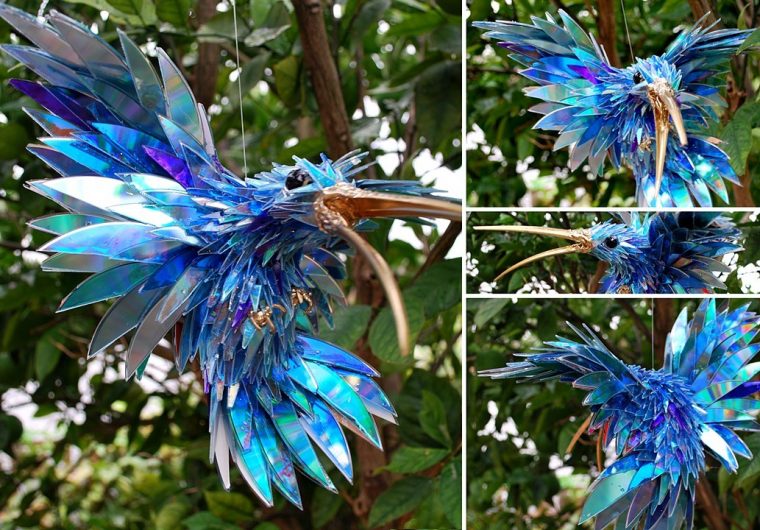 Sean used over 40 CDs to create this luminary bird in flight. 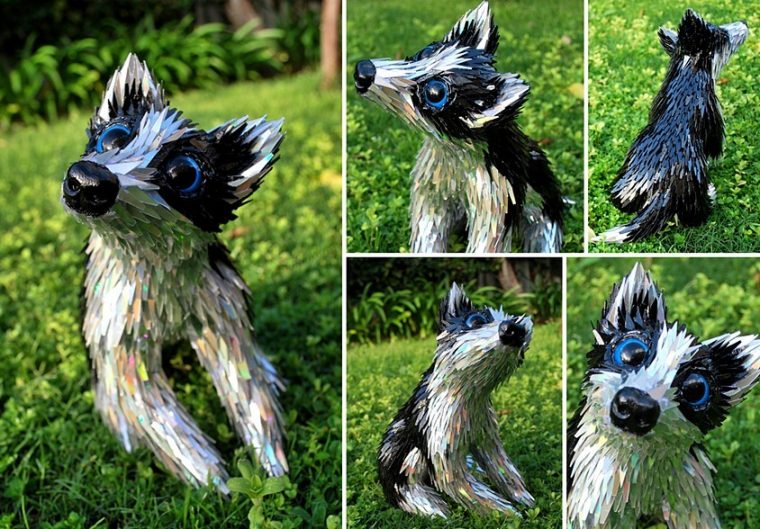 Sean says, “I use kitchen scissors to cut the shapes I need out of the CDs, then arrange each shard by colour and size. I then hot glue those shards one-by-one to a wire mesh frame to create a natural fur pattern.” 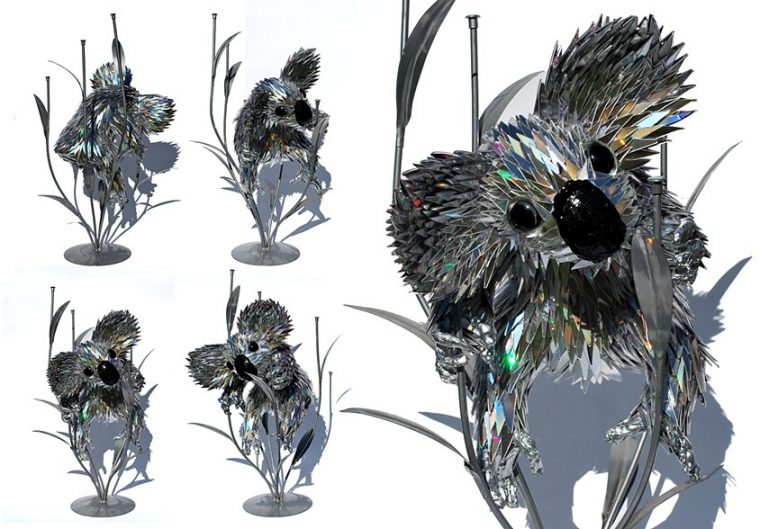 This was a commissioned piece by a fan of his work. 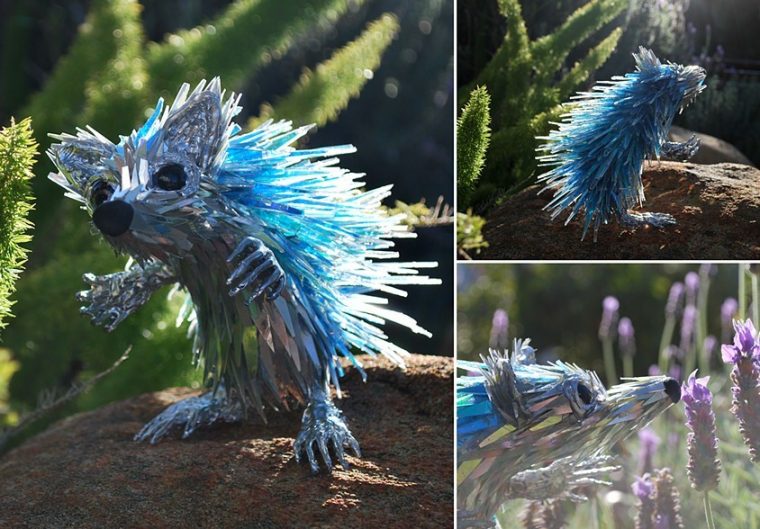 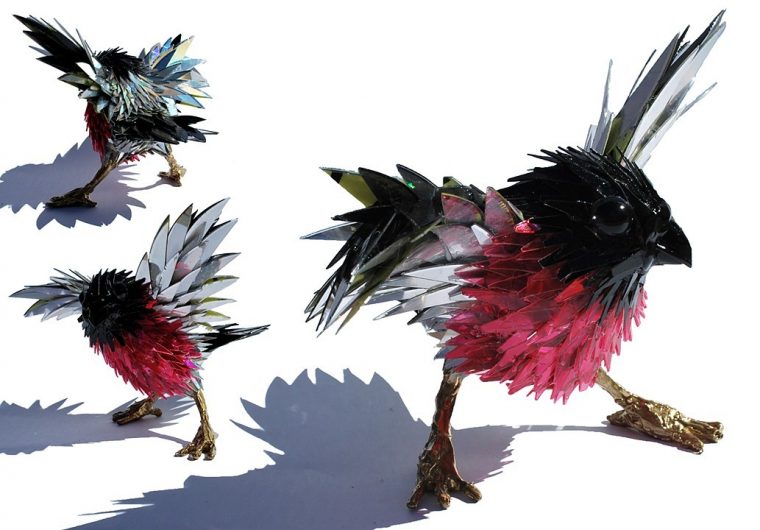 This one was also a commissioned piece. Sean says, “They usually take a week to make, maybe longer depending on how motivated I am to get them done.”

But Sean doesn’t just use CDs in his sculptures, he uses other things too. 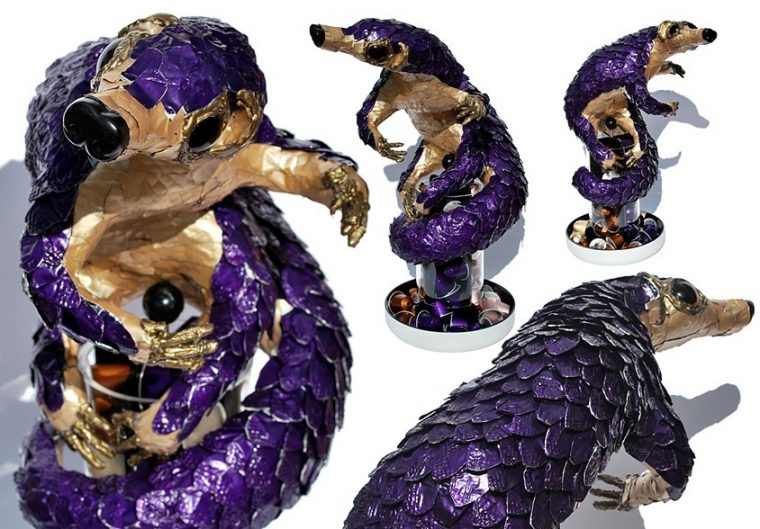 Here is a pangolin made out of Nespresso capsules for Nespresso’s Project Upcycle campaign.

Be sure to check out Sean’s website for more of his work, including his children’s stories!