These puzzles are out of this world- but they are based on a complex mathematical algorithm that IS from this world.

You’ve probably seen some cool things on this page- we like to share creative things based on nature. like the Fibonacci colouring book that took 40 years to create. Or the Sisyphus magnetic table that creates sacred geometry patterns in sand as you watch endlessly.

Design studio Nervous System has taken this trend to another level, culminating in computer-generated geode puzzles that are truly one-of-a-kind. 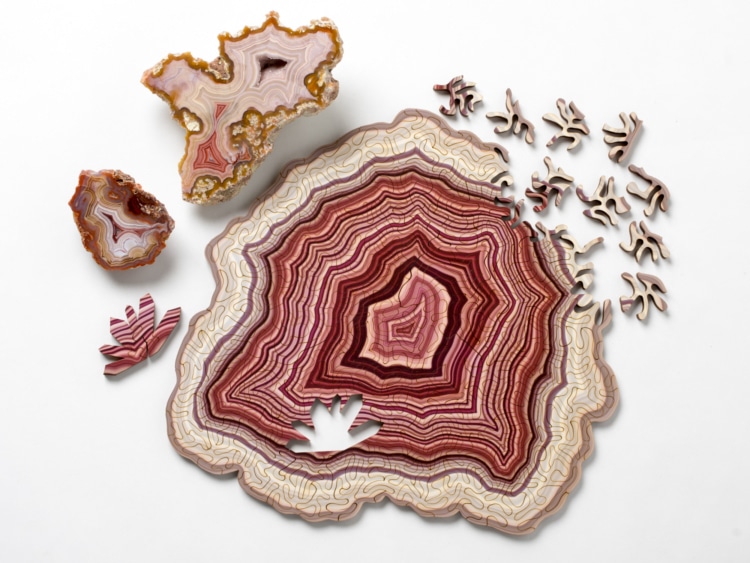 If you haven’t picked up a boxed jigsaw puzzle in a while, trust that they’ve undergone a serious transformation since your childhood. One of the most innovative companies in the category is Nervous System, a self-described “generative design studio” that composes computer programs to create puzzles based on patterns found in nature.

Their latest project, Geode, is a line of jigsaw puzzles modeled after agate stone. Like the rest of Nervous System’s puzzle inventory, it has an unusual and dynamic design; it’s meant to mimic the band pattern of actual agate created by trapped gas in volcanic stone. 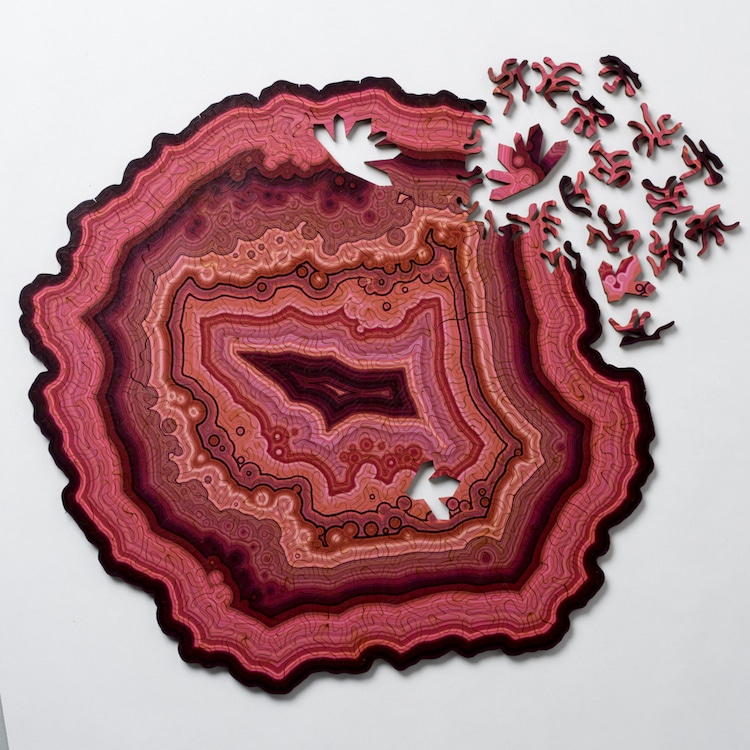 The Nervous System website says this about their design: “Each computer generated image represents a slice of an algorithmic geode. Concentric layers of color radiate from the puzzle’s edge filling the surface with a banded pattern reminiscent of agate. Each band of growth exhibits slight changes in growth rate, color and character resulting in a unique pattern.” 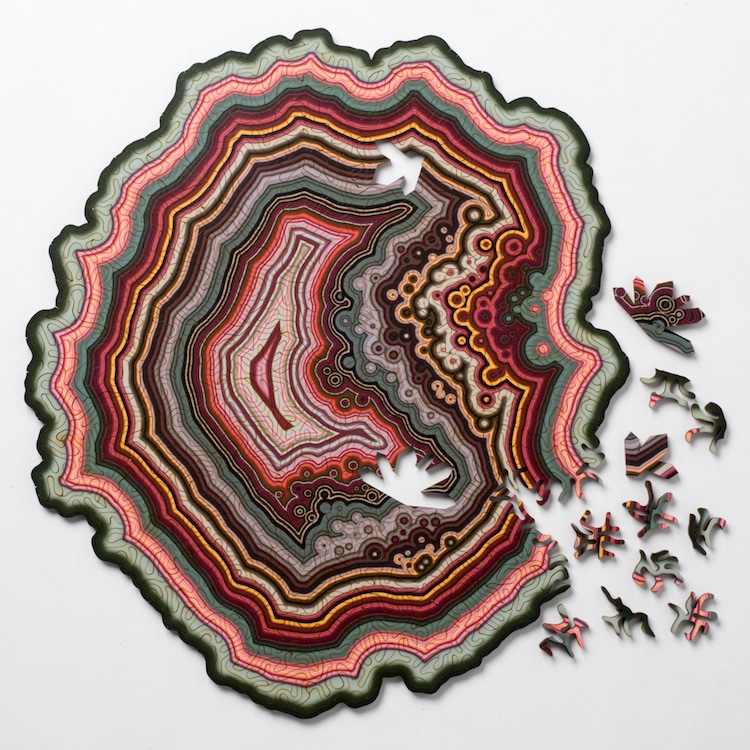 “Each puzzle is unique, emerging from a computer simulation that creates natural variations in the shape, pieces, and image. Hundreds of lasercut plywood pieces intertwine to form a challenging, maze-like puzzle. Each geode is a slice of an algorithmic rock.” 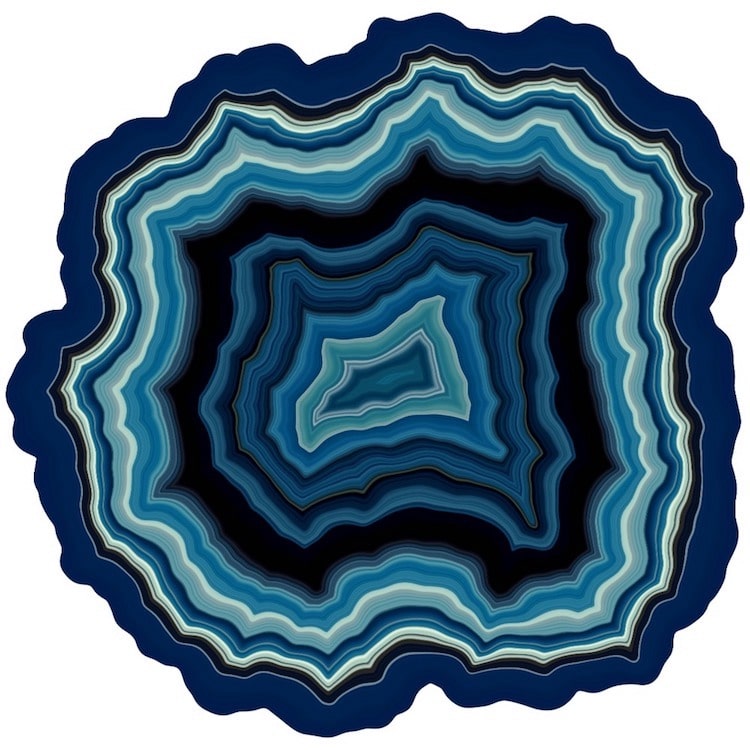 Though lovely to look at, the puzzles utilize Nervous System’s “Maze” piece-cutting method, which results in irregular and distorted shapes that may prove “fiendishly difficult” for some.

The 8.5-inch puzzles are made from plywood and feature 180 pieces. You can grab one for $60 at Nervous System’s online shop.

And if you were thinking about flipping it over and cheating, think again. These puzzles are no joke. 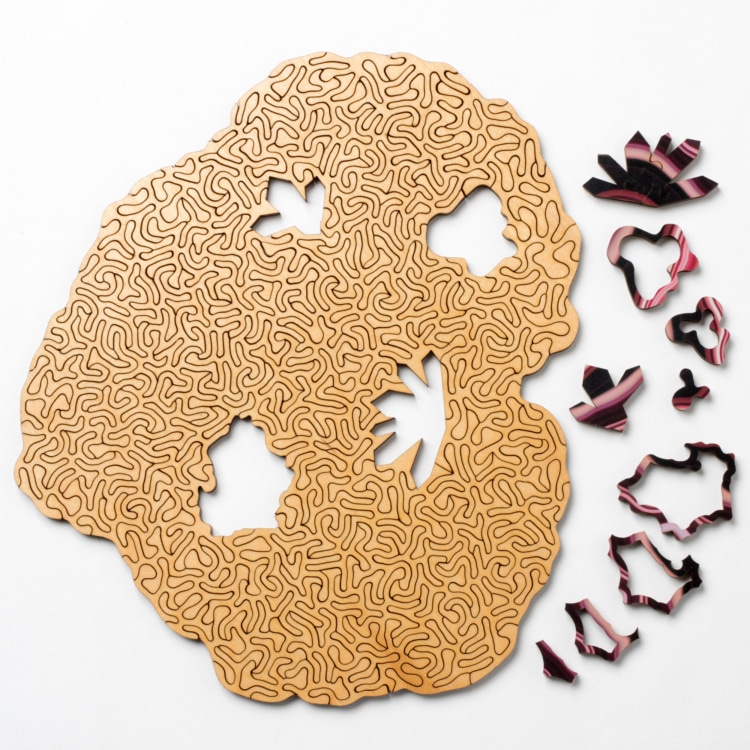 How do you think you would fare against one of these beautiful, but challenging, pieces of art?