There are people out there that can hear words and see colors or taste them. Others may experience other sensations as well. One woman who can taste words decided to offer up her services to Twitter. She asked her followers to respond to her to find out what their name tastes like and replied to them for hours.

Common. Synesthesia is a relatively common condition that affects about 4 percent of the population. Studies on it have found that it’s more common in people who have Asperger’s, affecting around 18.9 percent.

Magical Phenomena. For those without it, it almost sounds like a magical phenomena where someone see people as colors, taste words, or see music. The first recorded case of Synesthesia happened in 1690 when a blind man claimed to see the color scarlet when he heard the sound of a trumpet. 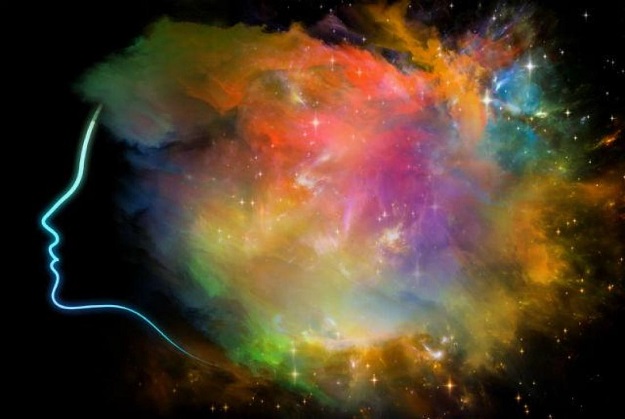 Taste. Julie McDowall of Glasgow, Scotland is a freelance journalist, podcaster and author. She’s also a synesthete who happens to be able to taste people’s names. Earlier this week she posted on Twitter asking for people to send her their names so she could tell them what they taste like.

Sensations. “I have synesthesia which means I can ‘taste’ words,” Julie tweeted. “Ask me what your name tastes like.” She then added, “I put ‘taste’ in [quotes]. Ninety percent is taste. Some sensations or images get through.”

Ummm. Someone asked her what her own name tastes like, and well, they got a very interesting response. Julie tweeted, “Sadly I’m a watery eyeball.” I’m not really sure if she means the image of one or the taste but okay.

Beaded Dress. A person named Paddy asked for Julie’s expertise and she responded, “A fat squishy notepad. Maybe it’s damp and so the paper has expanded.” The name Cynthia is “A heavy, beaded dress. Like something worn by Elizabeth I.” 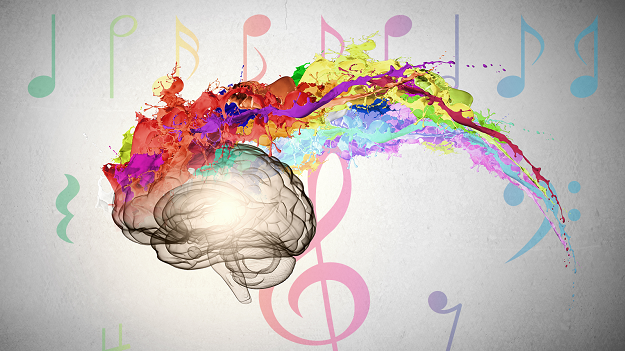 Sausage Roll. One woman tweeted at Julie, “Thank you. Can you do my fiancé Ross? Would love to include our different ‘tastes’ in our wedding somehow.” Julie responded that his name tastes like a sausage roll.

Mike vs Michael. “Mike? That’s more of a sensation than a taste. Like the spokes of a bike wheel. Brittle and metallic taste.” But Michael is surprisingly different. Julie tweeted that Michael tastes like “Salt and vinegar Ringos.”

Menthol. “Zelda is a Midget Gem with a menthol flavor. Tallulah is a hollow flute made from thin crisps,” Julie continued in another tweet. “Darren is the sensation of earache, So is Ian.” And Danielle tastes like Spaghetti-o-s. 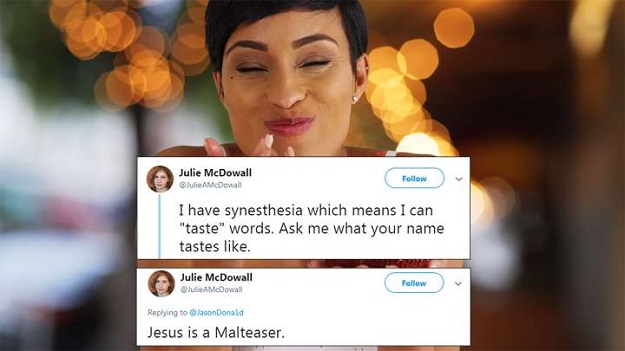 Leathery Button. “John is a leathery button on an old man’s cardigan. Bosco is too hard to grasp as it’s too unfamiliar,” Julie wrote. She continued on and on into the night answering people’s queries. Things started to get out of hand so Julie decided to ask for donations for her time and expertise.

Six Million. “I can’t possibly answer everyone’s name taste requests,” she tweeted. “6 MILLION Twitter activity in past 24 hours! But if you want to donate something to my podcast at the link below, I’ll taste three names for you. Pls include your Twitter handle and name requests.”

Requests. After a while she checked in again writing, “Working through my Paypal requests and have been getting a lot of Alisons and Johns. (Icing and buttons on an old man’s cardigan) so it was lovely to suddenly get a lady whose name is an edible kaleidoscope. Wow! That’s sending my synesthesia off the chart.” 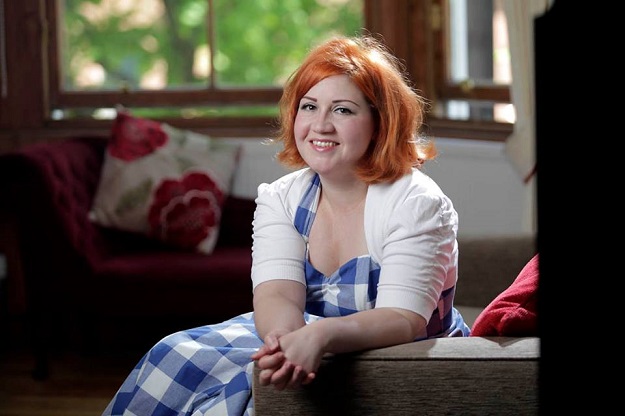 Pattern. The whole experiment turned out to be a learning experience for her. “There is *some* pattern to my synesthesia. For example, Susan is a zip, but Susannah is a zippable banana (whatever the hell that is!) The -annah adds a banana.”

Fascinating. The whole thread is absolutely fascinating and definitely worth checking out. And if you can’t find your own name you should definitely try to hit her up with a donation.