Manami Ito is a woman of many talents. Not only is she a champion Japanese paralympic swimmer and nurse by trade, she also plays the violin beautifully. This list of accomplishments alone would be quite impressive, but with Ito, it’s even more so because she only has one arm.

It will be impossible for anyone to say they can’t do something after watching this video of Manami Ito. Many folks blame their luck on why they aren’t successful at something they love.

There can also be a lot of excuses for why people fail at relationships, sports, family, etc. After watching the following video, you’ll stop blaming your luck though. While there is a lot that can go wrong, so much can go right if one chooses to try.

Manami Ito is a Paralympic swimmer, and she plays the violin with her prosthetic arm. 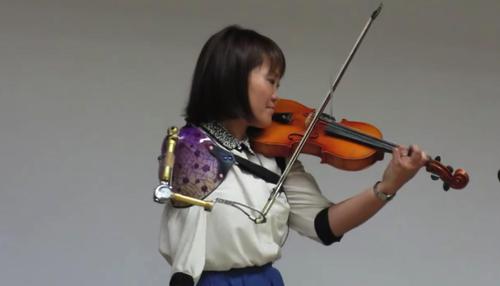 She originally lost her arm during a traffic accident in November 2004. At that time, she was studying to become a nurse in Japan. She had to abandon her career but when she was taken to a facility to get her artificial arm, she was amazed by the people with disabilities playing basketball. She decided to begin swimming after that and also went back to study once again to become a nurse.

Now, she is a violinist, a nurse and a Paralympic swimmer. She truly does it all. During the 2008 Beijing Paralympics, she came in 4th in the 100m breaststroke and 8th at the 2012 London Paralympics. She’s the first nurse in Japan to have a prosthetic arm and shares violin performances around Japan.

In the video that is featured, she plays Thread, which is by Miyuki Nakajima on September 2nd at the Takarazuka Center General Welfare Center. After being posted on Facebook, the video has since racked up 260,003 views.

Learning to play with her prosthetic arm must have taken many hours and lots of coordination. It couldn’t have been an easy feat. She is a talented individual, and she proves that continuing to strive to learn even when faced with obstacles can be beneficial to your life.

If she can have the stamina to still achieve all of this with her life then what are people with no health problems doing making excuses? Watching her does make anyone rethink the idea that they can’t do something.