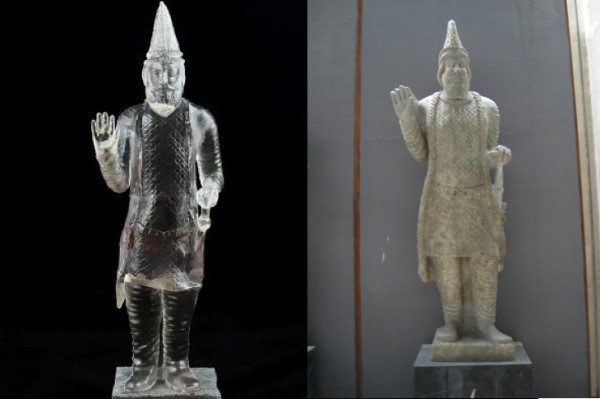 This artist is salvaging work destroyed by ISIS through 3D printing and a year’s worth of research.

Artist Morehshin Allahyari has spent the last year working with experts in art history and museum staff to gather information on several statues destroyed by ISIS and recreate them using 3D printing and the power of downloading.
Rhizome, an affiliate of the New Museum in New York, commissioned Allahyari to recreate some of the historical works smashed to pieces by ISIS, who terrorize the world with the vandalism of irreplaceable works and claim that it is to erase any history of polytheism.

Allahyari worked alongside museum staff to collect what little information is available from some of the destroyed pieces that were confirmed by archaeologists and historians. The artist makes it clear that her goal was never to replace the works, as that is not possible, but to create a digital time capsule. She explains that the project is all about “reconstructing not just the artifact, but the history and information.”
The project, titled Material Speculation: ISIS/Download, is put together into file that is available for anyone to download on the Rhizome website. So far, there are two works of art that anyone can download, and each file includes scholarly research, email correspondence with the Mosul Museum, high resolution images and 3-D printable versions of the artworks.
Allahyari 3D printed the projects as well and inserted a hard drive filled with all of the compiled information into the plastic replica of the statues.

Iraq’s Mosul Museum was hit hard early last year by ISIS, who took over the city of Mosul, looted the museum, and then destroyed the artifacts that were still there. Fortunately, the museum foresaw the invasion and transferred many of their works to the National Museum in Baghdad for safekeeping months before ISIS took over.

Video footage emerged of ISIS destroying some of the unique artifacts, inspiring artists and activists to recreate the works digitally.

“That’s what gives this project power—downloading. In a way, it gives the artwork new life.”

Thanks to True Activist for this post  and featured image