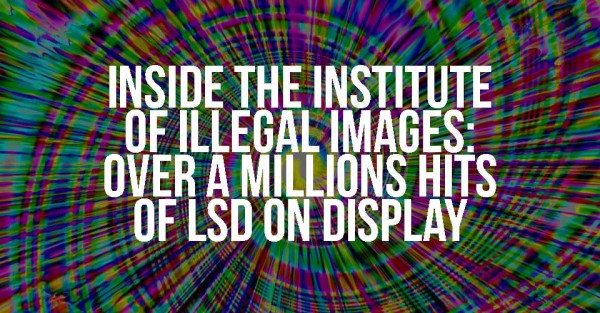 Have you ever heard of Mark McCloud? He has a collection of over 30,000 sheets of LSD in his San Francisco home which the DEA has tried to confiscate more than once.
Buy an “Intelligence is sexy” t-shirt!

15 years ago was the last time the feds tried to arrest and permanently sentence McCloud, and that attempt was just as unsuccessful for them as their previous ones. How can anyone have millions of hits of acid in their home and be allowed to keep them? Well, it’s art. It’s on display, and most of the sheets are ineffective due to “exposure to ultraviolet rays of light and oxygen which have neutralized the psychotropic chemicals,” says Mark. Although he has been arrested a few times for conspiracy to manufacture and distribute narcotics, he is always found innocent due to the tabs being inactive.

He calls his home the Institute of Illegal Images. Tens-of-thousands of framed images on blotter paper cover his walls from top to bottom. There you’ll find some well-known designs like “sorcerer Mickey”, and Grateful Dead logos, but you’ll also see works of art that can only be described as masterpieces. McCloud has put some of these images on the website Blotter Barn for those with a curiosity to browse through what he has been collecting since the 1970’s. “When I first noticed the blotter prints, I said, ‘Boy, this is fascinating, and maybe I should try to collect some of these so our children know what happened to us,’” McCloud says.
Read: Studies Find Psychoactive Drug Safer Than Alcohol When Driving

The history of blotter art is something McCloud is very familiar with. In fact, he is a treasure-trove of knowledge about this kind of stuff. At one point, he was on the board of the San Francisco Art Institute and art has always interested him. Blotter art happened to be the next evolutionary step for him after becoming a huge advocate for LSD.

1968 marked the first commercially available acid. It was simply drops on paper and was out of New York City, done by an underground chemist called Ghost. These sheets were called 5-by-20s and they were on a small card that was the size of autochrome film; they came out wrapped in Kodak packaging.
Then the 70s brought about illustrated tabs. The first sheets were printed on paper the same size as an LP so they could be shipped in vinyl records. In the early stages of illustrated sheets, a single image would be printed then divided into tabs and would usually be a single colour as well. It didn’t take long, however, for those simple images to become something much more elaborate.
Read: St. John’s Wort is Better Than Antidepressant Drugs

Blotter art has been evolving and is still a relatively new form of underground art. Erowid, a site for documenting drugs, says blotter art has led to “an array of creative and stunning designs,” insomuch as “it is likely that a few of the blotter designs shown have never been dipped [in LSD] and were created purely as art.” This site has its own digital collection of LSD blotter art, and some of the artwork from the Institute of Illegal Images can be found there as well.

When asked how many trips he has taken, McCloud told Vice, “Half of one. The full trip is when you’re happy playing harp in Heaven and your job is done. That’s the full trip.”