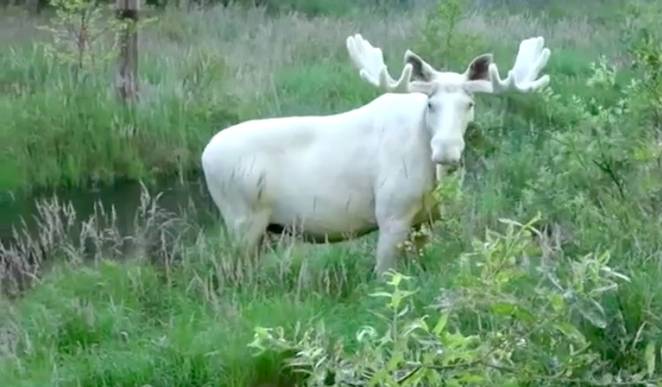 Of course, Sweden. In the western part of the country in the province of Värmland, a majestic white moose appeared out of the majestic nowhere to majestically cross a creek – and thankfully, there was a camera to capture 46 majestic seconds of the scene.

In the video, the BBC notes that the white moose is just one of 100 in the country. No mention of who keeps track of these things, but “white moose counter” seems like a pretty good job description to me.

The BBC also explains that this moose is not albino, but lacks color thanks to a genetic mutation. Albino animals are unable to produce melanin – animals with leucism, like white moose and peacocks, for example, have reduced pigment. True albino animals have pink or red eyes, whereas animals with leucism have all the splendor of a snowy mythical creature, but with dark eyes.

Regardless of the science, it’s just a gorgeous anomaly. All moose are spectacular: As the largest of all deer species, they stand as high as 6.5 feet at the shoulder and weigh up to 1,800 pounds; males have massive antlers that can span 6 feet from end to end! And believe it or not, they can run up to 35 miles an hour. But to see one stripped of its normal rich brown color is to see them in a new light – and any excuse to talk about the wonders of the animal world is good enough for me.

See the majesty below.