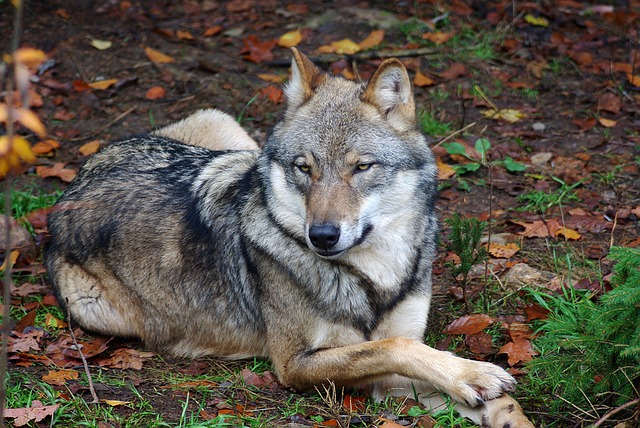 The last surviving wolf of the most celebrated pack in Yellowstone National Park’s history has been killed, legally, by a hunter in Montana.

In the parlance of Yellowstone wolf monitoring, he was 778M, though he’d also earned the nickname “Big Brown” for his handsome stature. He’d spent most of the past couple of years north of the park boundary, and it was there that he met his end by a bullet a few weeks ago.

Wolf 778M’s saga began, meanwhile, back in the spring of 2007, when he was born into the mighty Druid Peak Pack. The Druids, as they were reverently known by legions of dedicated wolf-watchers, had ruled the heart of northeastern Yellowstone’s Lamar Valley for years.

Yellowstone’s Druid wolf pack on the move. Image: In the Valley of the Wolves, PBS/YouTube

The broad glen – part of the mountain-walled, wildlife-rich steppelands north of the Yellowstone Plateau called the Northern Range – is often called “America’s Serengeti” given its plentiful and varied megafauna: from bison, elk, pronghorn, mule deer, bighorn sheep and moose to a full roster of native Rocky Mountain carnivores. And the Druids, for much of their 14-year existence, were its haughty top dogs.

The pack was among the second cohort of wolves reintroduced to Yellowstone in the mid-1990s – many decades after the canids were wiped out through the US government’s predator-control policy, which in the early twentieth century applied even to national parks. The founding Druids, who hailed from northern British Columbia, were released into the Lamar in April 1996, and didn’t take long to assert themselves. By the early 2000s, their numbers had grown to nearly 40 – one of the biggest wolf packs ever recorded. 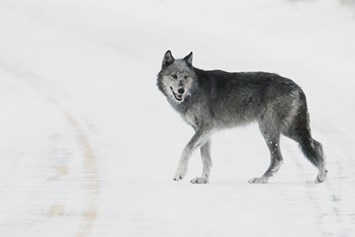 A female known as “Half Black” from the Druid pack, photographed back in 2003. Image: Yellowstone National Park, Flickr

With their primary den just a stone’s throw from the Lamar’s Northeast Entrance Road and one of their preferred rendezvous sites – where growing pups hang out after leaving the den – in full view of anyone with binoculars or spotting scope, the Druids became the best-known and most-watched pack in Yellowstone, and very likely the world.

All told, more than 100,000 visitors saw them at their wolfish work in the wild, wide-open arena of the Lamar Valley: dragging down elk, mobbing grizzlies, rumbling with other packs and performing downright Sopranos-worthy internecine dramas. In 2000, the pack’s domineering alpha female, 40F, was killed in an apparent coup by other Druid she-wolves, including her sister, 42F, who took over the leadership role.

The Druids were the flashy face of an exciting new chapter for the oldest national park in the US, as its ecology rapidly readjusted to the return of an apex predator to the stage. 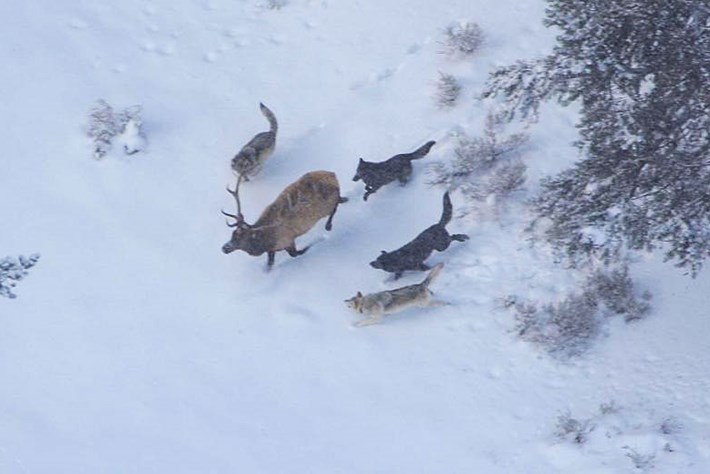 Wolf empires are as transient as human ones, though. By 2010, the Druid Peak Pack was in shambles: ravaged by terrible pack-wide mange, beset by rivals, and dwindled by natural dispersal and deaths.

But 778M – who was the grandson of the Druids’ celebrity alpha male 21M, a magnificent black wolf from the first litter of one of Yellowstone’s original reintroduced groups – had left his natal pack well before its sorry unravelling. In 2008, a year after his birth, he and several other wolves dispersed from the Druids and helped establish the Blacktail Deer Plateau Pack to the west. Big Brown became its alpha male by late 2009.

When Yellowstone’s head wolf biologist Doug Smith radio-collared him in 2011, 778M weighed a solid 118 pounds. And his easy swagger made him, like his grandfather, a natural-born leader. “He had that classic confidence and quiet self-assurance that pretty much all alpha males have,” said Yellowstone Wolf Project biological technician Rick McIntyre in a Jackson Hole News & Guide article announcing the one-time Druid’s death.

Under 778M and his mate, 693F, the Blacktails comprised an impressive 15 wolves by the early 2010s. Their numbers soon declined, however, and 693F died in late 2013, likely killed by other wolves. By then, Big Brown was the last surviving Druid. He hung around Blacktail territory for a spell, even gaining a few companions, though the pack never really reformed. Eventually, he drifted north of the park into the Gallatin National Forest and a bit more obscurity.

“He went from being one of our main wolves [in the park] to being a peripheral wolf to being a wolf we didn’t keep track of at all,” Doug Smith told the Jackson Hole News & Guide. 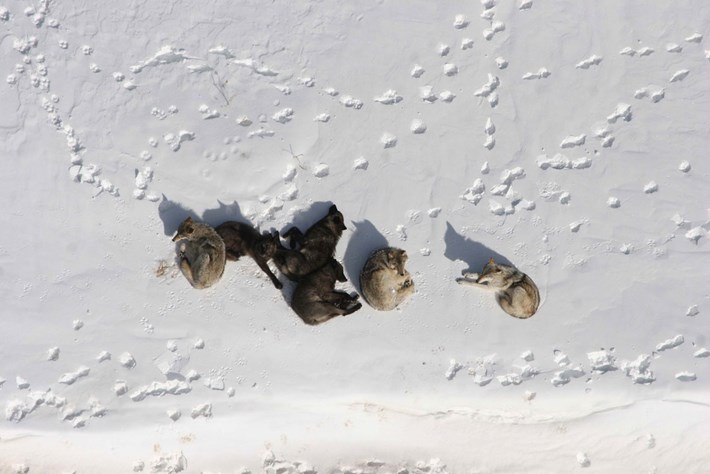 Druid pack wolves bedded down in the snow. Image: US National Park Service

Montana held its first modern wolf hunt in 2009; there was none in 2010, but hunts have occurred annually since 2011, when the federal government removed wolves in the region from its endangered species list. Over 200 were killed during the 2015 season. Conservationists have been pushing for buffer zones around Yellowstone where wolf hunting is prohibited, but the efforts have been unsuccessful thus far.

Though 778M’s death marks the end of the Druid wolves, their bloodline lives on in other Yellowstone packs. In fact, the old Druid kingdom has been home to a confederation partly composed of Druid descendants for several years: the Lamar Canyon Pack. These wolves have denned in the same grove that saw generations of Druid pups whelped, and in some seasons they’ve been visible enough to summon throwback visions of the Druids’ royal heyday. (The most celebrated Lamar Canyon wolf, the so-called “06 Female”, was herself killed outside the park in late 2012 – one of a dozen Yellowstone-ranging wolves shot outside the boundaries during that winter’s hunting season.)

“Certainly there is a sadness in the death of 778 after living a long and difficult life. But now that he’s gone, we still have descendants of the Druid wolves,” McIntyre told Jackson Hole News.

In few places on earth are wolf societies and wolf geopolitics so scrutinised as Yellowstone, and thus the death of a long-lived, long-tracked individual like Big Brown has powerful resonance for scientists and wolf-watchers alike. And in his passing, the glories and tragedies of the Druids truly become the stuff of legend.

Via EarthTouchNews by  ETHAN SHAW