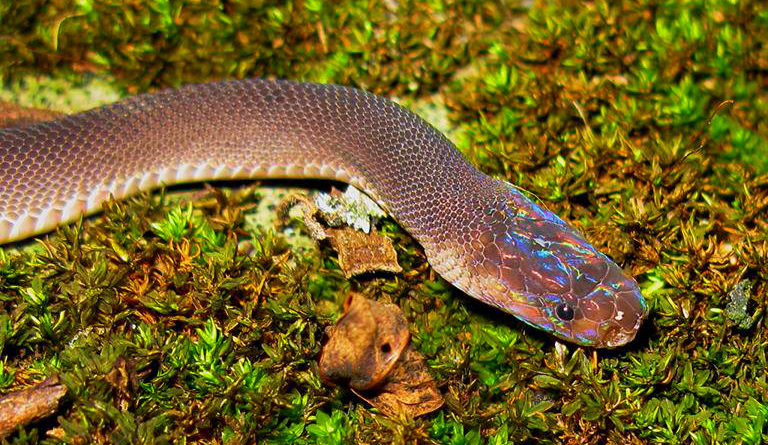 All were found in 2015 in the biodiverse Greater Mekong region of Southeast Asia.

A rainbow snake and Klingon newt are among the whimsical new species discovered in the Greater Mekong region, scientists announced today.

A new report published by World Wildlife Fund unveiled 163 new Mekong species to the world—all of which were found in 2015 alone.

One of the most species-rich spots on Earth, the Mekong and its river encompass parts of Laos, Cambodia, Thailand, Myanmar, and Vietnam. Over the last 20 years, biologists have discovered nearly 2,500 new species in its mountains and rain forests.

Many are very small, making them harder to spot by scientists. Others live only in small patches of habitat in hard-to-reach locations. Still others may be confused with other species.

But finding them is crucial, Blackburn says: A formal classification is the first step in protecting a species.

“A lot of the world’s biodiversity remains to be described,” Blackburn says. “Some of these species are prone to extinction. We can’t protect what we need to protect without data.”

Threats include ongoing development in the region, including several large dams. Such infrastructure could permanently change the ecosystem, making it more important than ever to understand the plants and animals, from the mundane to the bizarre, that call the Mekong home. (Read more about Mekong River’s controversial dams.)

Tourists flock to Thailand’s Phuket for the gorgeous beaches, but experts hope the discovery of a new reptile on the island will encourage ecotourism as well.

Spikes on the back of the Phuket horned tree agamid (Acanthosaura phuketensis) look fierce, but the insect-eating reptile is harmless to people.

This blue-spotted reptile with piercing dark eyes hides out in the remote karst mountains and caves of Laos.

There are so many gecko species that it took sophisticated DNA analysis to determine Gekko bonkowskii is prevously unknown.

The fur on Murina kontumensis makes it look more suited to Arctic climes, but this mammal actually dwells in the central highlands of Vietnam. (See 16 beautiful pictures of bats.)

Many Murina bats make their homes in this area, and although they might have a face only a mother could love, they’re crucial to the health of their ecosystem.

Scientists discover between a hundred and 150 new frog species each year, according to Blackburn. These discoveries aren’t always immediate, however.

It took almost a decade of painstaking genetic and acoustic analysis to determine that the inch-long, orange-eyed litter frog (Leptolalax isos), native to Cambodia and Vietnam, was new to science.

On a rocky cliff in Laos, a team of biologists happened across a snake with a silvery, iridescent head that looked like nothing they’d ever seen. After studying it back in the lab, scientists realized this snake wasn’t just a new species, it was a new genus as well. (Read about a highly endangered species of silver snake.)

The Klingon newt, found in northeastern Thailand, has a burgundy body and black markings that make it easy to spot amid the greenery of the surrounding area.

Tylototriton anguliceps’ distinctive skull shape is reminiscent of that of Lieutenant Worf and other Klingons on Star Trek.