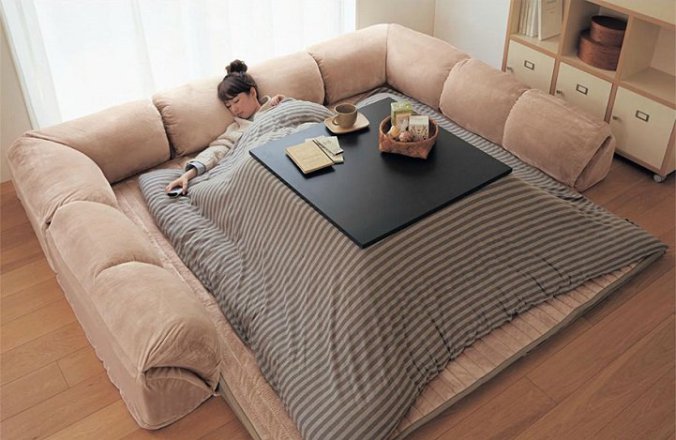 The kotatsu is a contemporary invention with roots that date back to 14th century Japan.

It looks pretty cool, right? This cozy invention consists of a low, wooden frame covered by a heavy blanket, which a table top rests upon. Underneath is an electric heat source (charcoal was used in the old days, and some still prefer this method), which is usually built into the table itself. However, if someone uses the charcoal version, there is a pit under the table. The pit is cut into the floor and is about 40 centimeters deep. Kotatsu are used almost exclusively in Japan, although similar devices are used elsewhere.

In the twenty-first century, the kotatsu typically consists of the electric heater attached to the frame, which is no longer limited to wood, but may be made of plastic or other materials. Generally, a blanket (or shitagake) is draped over the frame and heater and under the table-top. This first blanket is covered by a second heavier blanket, known as a kotatsu-gake (火燵掛布). Kotatsu-gake often are decorative and may be designed to match home décor. A person sits on the floor or on zabuton cushions with their legs under the table and the blanket draped over the lower body. The kotatsu was designed when people most commonly wore traditional Japanese style clothes, where the heat would enter through the bottom of the robes and rise to exit around the neck, thus heating the entire body.

Most Japanese housing is not insulated to the same degree as a western domicile and do not have central heating, thus relying primarily on space heating. Heating is expensive because of the lack of insulation and the draftiness of housing. A kotatsu is a relatively inexpensive way to stay warm in the winter, as the futons trap the warm air. Families may choose to concentrate their activity in this one area of the house in order to save on energy costs. In the summer, the blanket may be removed, and the kotatsu used as a normal table. –wiki

It is possible to sleep under a kotatsu, although unless one is quite short, one’s body will not be completely covered. This generally is considered acceptable for naps, but not for overnight sleeping for many reasons: one’s body is not completely covered, yielding uneven heating; the table is low, so one may touch heating elements accidentally when moving while asleep, risking burns. Traditionally, children are told that they will catch a cold if they sleep under a kotatsu. Pets such as cats frequently sleep under kotatsu, however, and are small enough to fit completely underneath—comparable to cats who sleep on floor heating vents in western countries (Japanese homes do not generally have floor heating vents).

During the winter months in Japan, the kotatsu often is the center of domestic life. In the evening family members gather around the kotatsu to enjoy food, television, games, and conversation while keeping the lower half of their bodies warm. It has been said that, “once under the kotatsu, all of your worries slip away as a familiar warmth takes over and you become completely relaxed.” –wiki