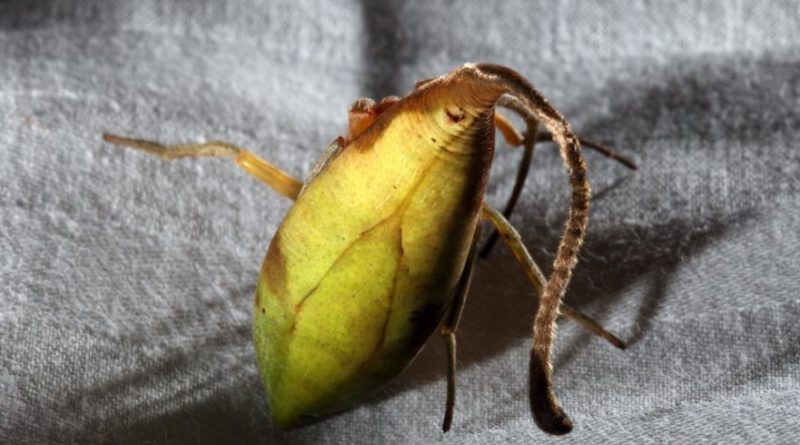 Scientists stumbled upon the potentially new species in a Chinese rain forest.

For Matjaz Kuntner, it was just another evening trek through southwestern China‘s Yunnan rain forest—until his headlamp illuminated a strand of spider silk.

That’s not so surprising on its own. But what attracted the arachnologist’s attention is the silk appeared to attach a leaf to a tree branch. After looking closer, Kuntner realized one of these leaves was actually a spider.

“If there’s a web, there’s a spider,” says Kuntner, of the Smithsonian Institution and the Evolutionary Zoology Laboratory in Slovenia. (Read about a newfound tarantula that shocked scientists.)

That’s because Kuntner and colleagues suspect they’ve found a new species of orb-weaving spider—and the first one known to mimic a leaf.

The arachnid uses its silk to attach leaves to tree branches, and then hides among the branches, according to a new study in the Journal of Arachnology. The researchers still aren’t sure why the spider does this, but they believe it’s likely to hide from predators or sneak up on prey.

Animals have evolved countless ways to hide themselves from predators and their potential prey. Camouflage is an animal’s way of making itself invisible, while masquerading allows an animal to resemble something entirely different. (See pictures of amazing insect camouflage.)

Leaf masquerading is particularly common among arthropods and other small animals: Dead leaf butterflies in the Kallima genus, for instance, perfectly resemble dried leaves—down to the fungus spots.

“A masquerade is much more likely to be successful if there are lots of examples of their disguise around them,” Skelhorn adds.

That’s especially true of the leaf-mimicking spider, which apparently drags dead leaves from the ground up into the tree to help conceal its presence.

Like these leaves, the spider is brownish green in color, with a long necklike structure connecting its head and chest to its abdomen. Its teardrop-shaped body even has markings that resemble the veins on a leaf.

“Its disguise is so good that it might explain why so few of these spiders have been collected. Even trained scientists have a hard time spotting them,” Kuntner adds.

Speaking of, Kuntner and colleagues have only found two leaf-mimicking spiders so far: The adult female observed on the evening hike, and a juvenile found a few days later. (Read about a plant that looks like poop and other sneaky disguises.)

Preliminary genetic data hinted that these two specimens might be a new species, but more work has to be done to confirm that, he says.

Until then, scientists can only guess at how many other creatures are hiding in plain sight.