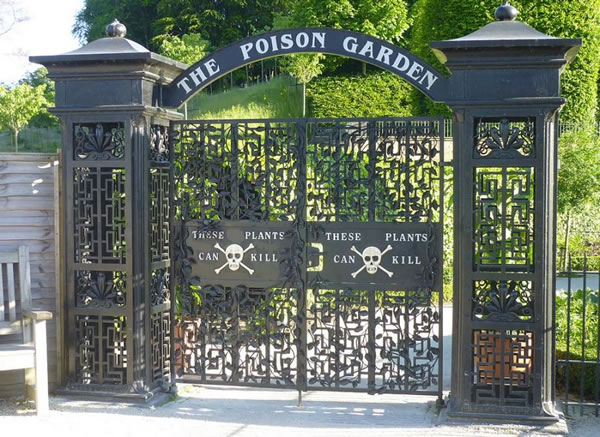 From deadly nightshade to hemlock, the only way a plant can take root in this garden is if it is lethal to humans.

The Alnwick Garden is one of north England’s most beautiful attractions, where acres of colorful plants invite visitors to wander through rows of fragrant roses, manicured topiaries and cascading fountains. But within Alnwick’s boundaries, kept behind black iron gates, is a place where visitors are explicitly told not to stop and smell the flowers: the Poison Garden, home to 100 infamous killers.

In 1995, Jane Percy became the Duchess of Northumberland, a county in northeastern England that stretches to the border with Scotland, after her husband’s brother died unexpectedly. With the title came the Alnwick Castle, the traditional seat of the Duke of Northumberland (it also served as the setting for Hogwarts in the first two Harry Potter films). After the family took up residence in the castle, Percy’s husband asked her to do something with the gardens, which at the time were a disused commercial forestry boasting nothing more than rows and rows of Christmas trees.

“I think he thought, ‘That will keep her quiet, she’ll just plant a few roses and that’ll be it,’” the duchess says. But Percy did more than plant a few roses. In 1996, she hired Jacques Wirtz, a landscape architect who has worked with the Tuileries in Paris and the gardens of the French president’s residence, to help reimagine the Alnwick Garden. Today, the gardens encompass 14 acres and attract over 600,000 visitors each year, making them one of North England’s most popular tourist attractions.

“I realized I could do something really great if I had the right team,”says the duchess. But she knew she needed more than a good team—she needed something to set her project apart from the other gardens that dot the English countryside. “If you’re building something, especially a visitor attraction, it needs to be something really unique,” she says. “One of the things I hate in this day and age is the standardization of everything. I thought, ‘Let’s try and do something really different.’”

The duchess thought she might want to include an apothecary garden, but a trip to Italy set her on a slightly different course. After visiting the infamous Medici poison garden, the duchess became enthralled with the idea of creating a garden of plants that could kill instead of heal. Another trip—this one to the archeological site of the largest hospital in medieval Scotland, where the duchess learned about soporific sponges soaked in henbane, opium and hemlock used to anesthetize amputees during 15th-century surgeries—reinforced her interest in creating a garden of lethal plants.

“I thought, ‘This is a way to interest children,’” she says. “Children don’t care that aspirin comes from a bark of a tree. What’s really interesting is to know how a plant kills you, and how the patient dies, and what you feel like before you die.”

So the duchess set about collecting poisonous plants for her envisioned Poison Garden. While selecting the 100 varieties that would eventually take root there, she had only one steadfast requirement: the plants had to tell a good story. This meant that exotic killers like South America’s Brugmansia* would mingle with more common poisons, such as laurel hedges.

“What’s extraordinary about the plants is that it’s the most common ones that people don’t know are killers,” the duchess says. Visitors are often surprised to learn that the laurel hedge, nearly ubiquitous in English gardens, can be highly toxic. But some visitors have had experience with laurel’s sinister side—the duchess has heard a few talk about how, after loading up their cars with pruned laurel leaves to take to the dump, drivers have fallen asleep behind the wheel of their car from the toxic fumes the branches emit.

Because of the plants’ dangerous qualities, visitors to the Poison Garden are prohibited from smelling, touching or tasting any of them. Still, even with guidelines in place, visitors can fall victim to the plants. This past summer, seven people reportedly fainted from inhaling toxic fumes while walking through the garden. “People think we’re being overdramatic when we talk about [not smelling the plants], but I’ve seen the health and safety reports,” the duchess says.

As part of the Poison Garden’s educational mission, the duchess grows a variety of drugs, from cannabis to cocaine (derived from the leaves of the coca plant), which she and garden guides use as a jumping-off point for drug education. “It’s a way of educating children without having them realize they’re being educated,” she says.

Other poisonous plants might be less well-known to visitors, but are no less potent. One of the duchess’s favorite plants is Brugmansia, or angel’s trumpet, a member of the Solanaceae family (which includes deadly nightshade) that grows in the wild in South America. “It’s an amazing aphrodisiac before it kills you,” she says, explaining that Victorian ladies would often keep a flower from the plant on their card tables and add small amounts of its pollen to their tea to incite an LSD-like trip. “[Angel’s trumpet] is an amazing way to die because it’s quite pain-free,” the duchess says. “A great killer is usually an incredible aphrodisiac.”

Whether a plant kills with pleasure or with pain, visitors can count on walking away from the Poison Garden with an entertaining anecdote. “Most plants that kill are quite interesting,” says the duchess.