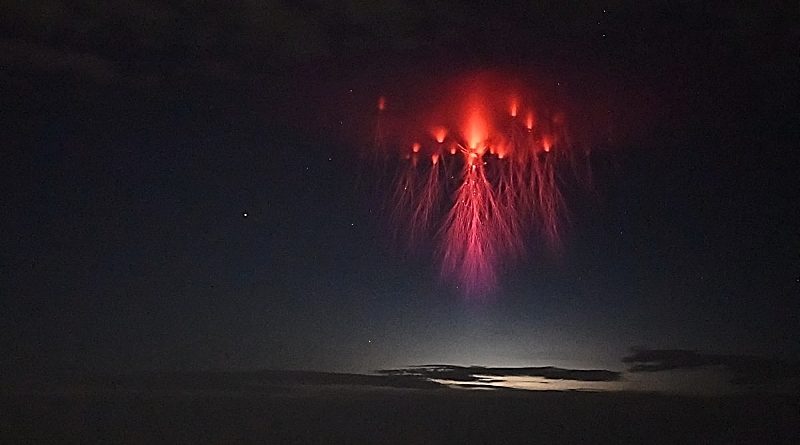 One of the most amazing photographs has captured an event that takes place in tenths of a second.

At night, events in the sky can be more than spectacular, like seeing a huge red jellyfish in the sky due to a major electrical storm .

Tentacle-like red lightning bolts have been caught in the skies of most of the world, with a shape that closely resembles that of a fantastic jellyfish. However, they are not paranormal or unknown events: they are ultra-fast bursts of electricity that move in space, according to the European Space Agency.

These tentacle-like spurts of red lightning are called sprites. They’re ultrafast bursts of electricity that crackle through the upper regions of the atmosphere — between 37 and 50 miles up in the sky. That puts them in the mesophere, the coldest layer of planet Earth’s atmosphere.

The phenomenon is a rare sighting: It lasts just tenths of a second and can be hard to see from the ground since it’s generally obscured by storm clouds. 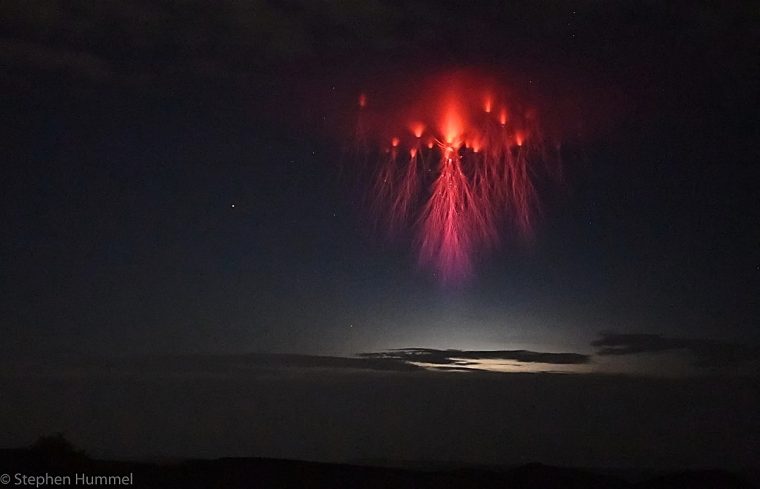 But Stephen Hummel, a dark-skies specialist at the McDonald Observatory, captured a spectacular image of one of these sprites on July 2 (shown above) from a ridge on Mount Locke in Texas.

The sprites jellyfish can be enormous: the photographed Hummel had “probably about 48 kilometers long and high” he said. Some can be seen from more than 482 kilometers away.

They occur because when lightning strikes the ground, it tends to release positive electrical energy that needs to be balanced by equal and opposite-charged energy in other parts of the sky. So the sprites are the electrical discharges that balance the equation. “The more powerful the storm and the more lightning it produces, the more likely it is to produce a sprite ,” Hummel said.

When a sprite sparks, it turns red due to the nitrogen floating high in Earth’s atmosphere . The gas interacts with the burst of electricity and emits a red glow.

This is how it looks from space: 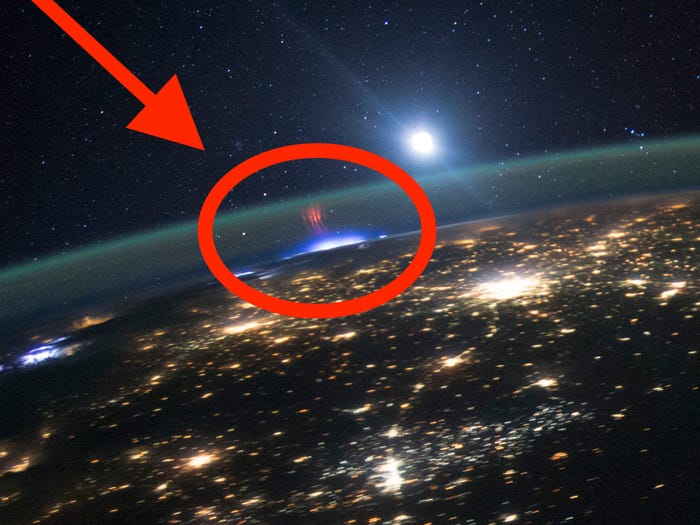 They occur because when lightning strikes the ground, it tends to release positive electrical energy that needs to be balanced out by equal and oppositely charged energy elsewhere in the sky. So sprites are the electrical discharges that balance the equation.

As a sprite sparks, it turns red because of nitrogen floating high in Earth’s atmosphere. The gas gets excited by the burst of electricity and emits a red glow.

Davis Sentman, a professor of physics at the University of Alaska who died in 2011, proposed the name “sprite” for this type of weather phenomenon. He said the name was “well suited to describe their appearance,” since the word evokes the lightning’s fairy-like, fleeting nature.