It’s not every day you see something as delightful and heartwarming as this group of backyard misfits.

If you have a backyard, it is more than likely that you’re sharing it with an array of critters. We’ve all experienced the company of squirrels, raccoons, and possums in our time.

But one man recently had the most unexpected of visitors.

Roland Rydstorm, from Anchorage, Alaska, had quite the shock when he looked out of his window last week. He had a few uninvited guests pop over to his place; last week, a mama moose and her two calves came over to his backyard.

The not-so-little-guys decided to have a taste-test of everything from the chairs to the gates and when they decided the backyard was safe, they snuggled and even took a nap. At one point, the mother moose gave the babies some lunch. 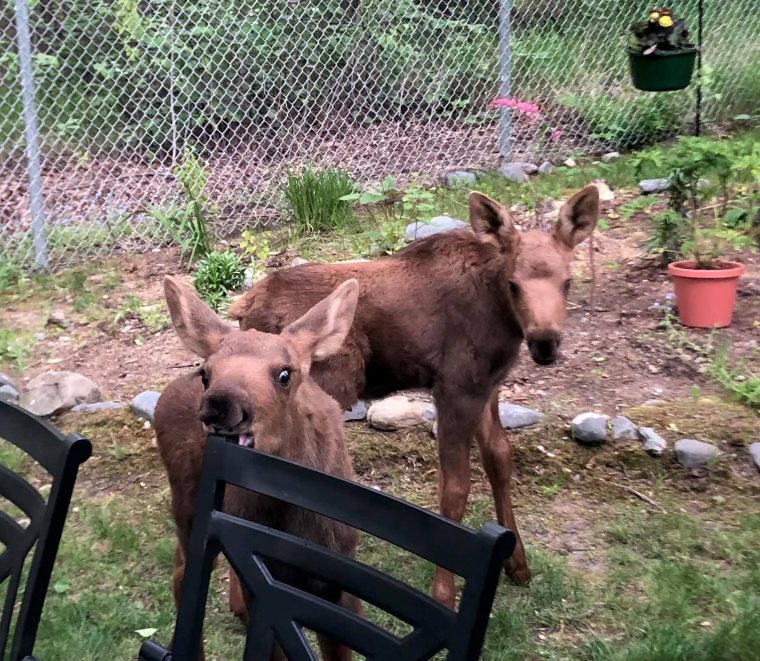 Thankfully, Rydstorm was home to document the whole thing.

After taking the photographs of the peaceful and playful animals, and some video, Rydstorm uploaded the content to his Facebook page, where it received more views than he possibly imagined. Just goes to show, the world really needs some heartfelt good vibes right now. 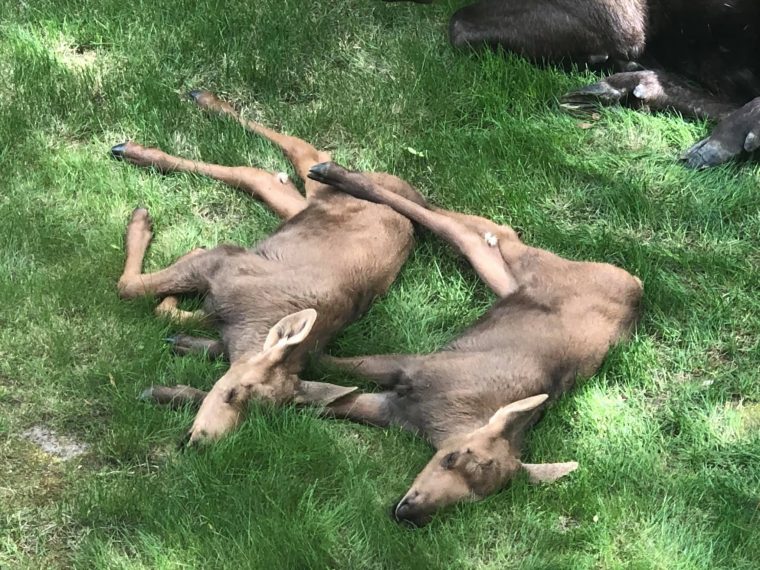 Now, the Alaska Moose is the state’s official land mammal, and 175,000–200,000 of these hulking critters call The Last Frontier their home.

And they’re not small. If you’ve never seen a moose in real life, you might be surprised by just how massive they can get. 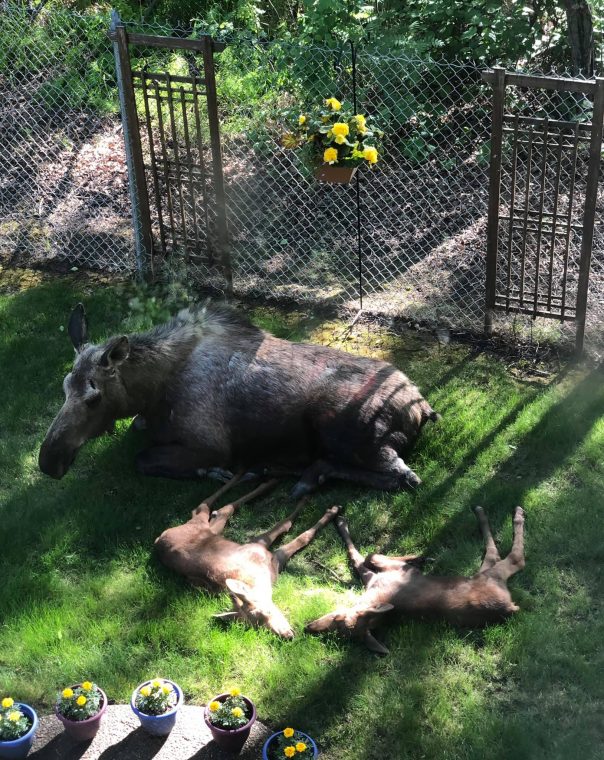 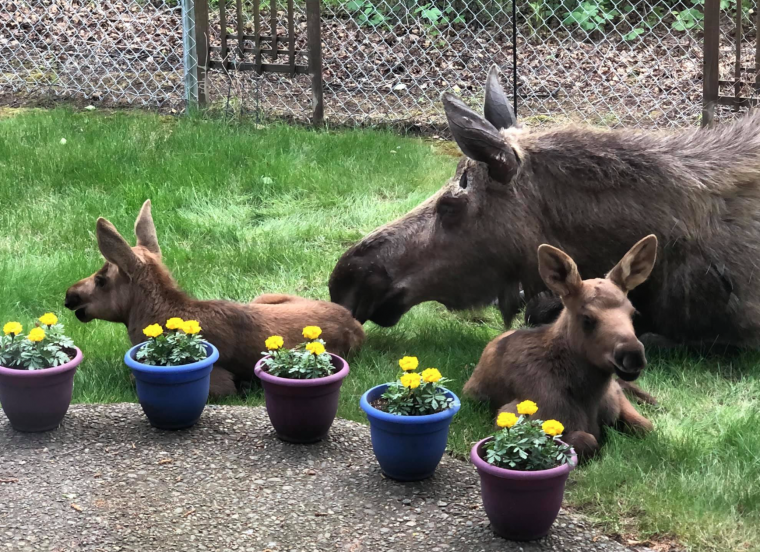 Living in Alaska, it isn’t uncommon to come across one of these remarkable mammals. Seeing a moose strolling across the street isn’t anything out of the ordinary here, and Raymond has spotted a fair share of moose in his time. However, they usually do not wander into residential back yards and linger for lunch, or naps. 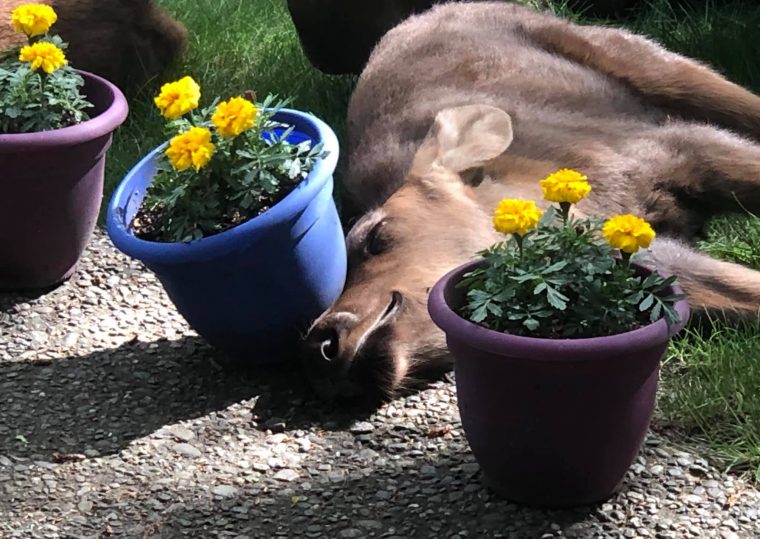 “I could watch them directly from my work spot. It was a great distraction and a fun way to spend the day while I was editing concert footage for my job with the Anchorage Symphony Orchestra.” 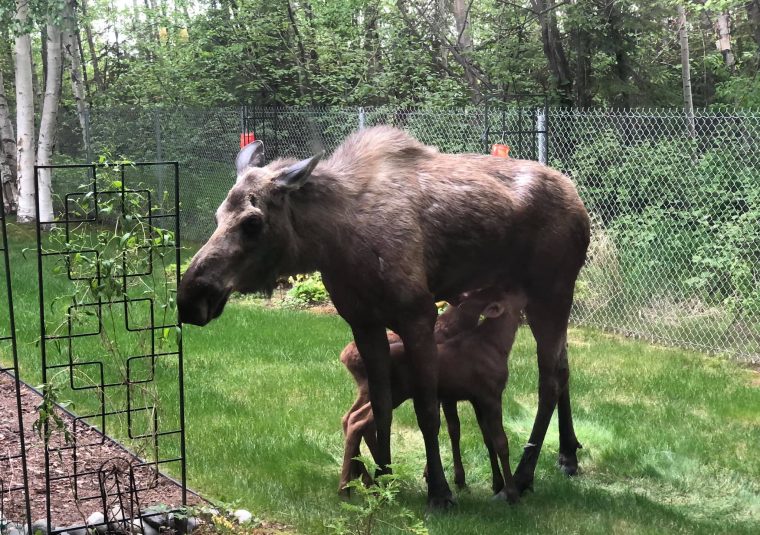 “Throughout the day, as the moose changed lounging spots or walked away and came back, I’d go back to the window or the open door – the screen door was still closed – to take more pictures of them. They were oblivious to me most of the time – although their ears were up most of the time, so obviously they were alert.”

The little family lounged in his yard most of the day, between around 9am and 7pm.