Forget everything you know about insects. Whether you love them, hate them, or think they’re weird, you’re about to fall in love with one special dragonfly.

The moorland hawker dragonfly is commonly found around the ponds and wetlands of Europe, Asia, and North America. If you’re not familiar with it yet, sit down because you’re about to make it your new best friend.

Rassim Khelifa from the University of Zurich, Switzerland, witnessed the behaviour for the first time in the moorland hawker dragonfly (Aeshna juncea). While collecting their larvae in the Swiss Alps, he watched a female crash-dive to the ground while being pursued by a male.

Khelifa conducted a study of the females’ death-feigning and found that usually “their strategy works.” Most males buzzed the crash site briefly, he says, then flew off to look for other conquests. Once the males left, the lifeless-looking females stirred and went on their way.

“I was surprised,” says Khelifa, who had never previously seen this in 10 years of studying dragonflies. 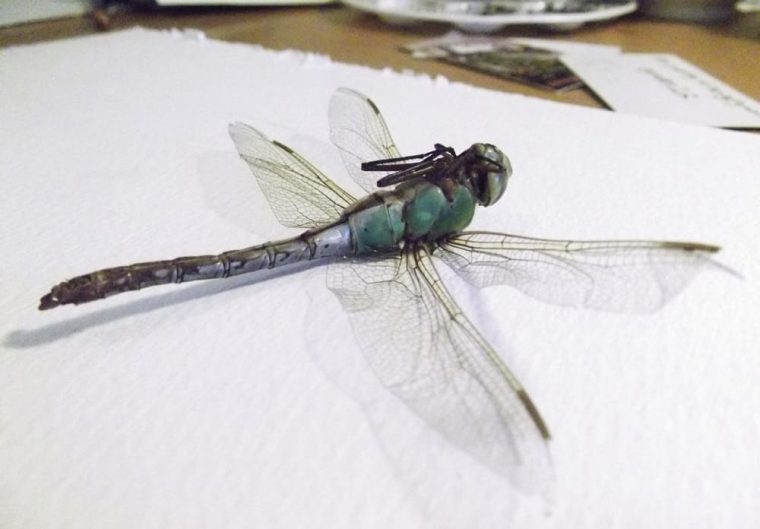 Over the next few months, Khelifa documented dozens of cases where females would crash land while being pursued by a male. He also looked at the reproductive behaviour of A. juncea to try to work out why females would do this.

His observations showed females would arrive at the ponds where the males were waiting to mate. Males would intercept females mid-air before copulating somewhere nearby. The male then flew away and the female laid eggs on her own, without any protection—unlike many other dragonfly species, where the male will guard the female.

Apparently females of the species Aeshna juncea play dead to avoid copulating with other males once their eggs have been fertilized.

During further study of the species in their natural environment, Khelifa observed 27 females crashing to the ground or into shrubs, feigning their deaths. Of those, 21 succeeded in tricking the males. In each of the fake death attempts the female had just left her eggs or was on her way to tend to them again.

All of the females that kept on flying when they were pursued by males were grabbed by the males in mid-flight.

When a female dragonfly’s eggs have been fertilized, any subsequent mating with aggressive males can harm her.

So, she fakes being lifeless until they bugger off.

Even though it is a risky strategy, faking death appears to help females survive longer and produce more offspring by avoiding coercion.