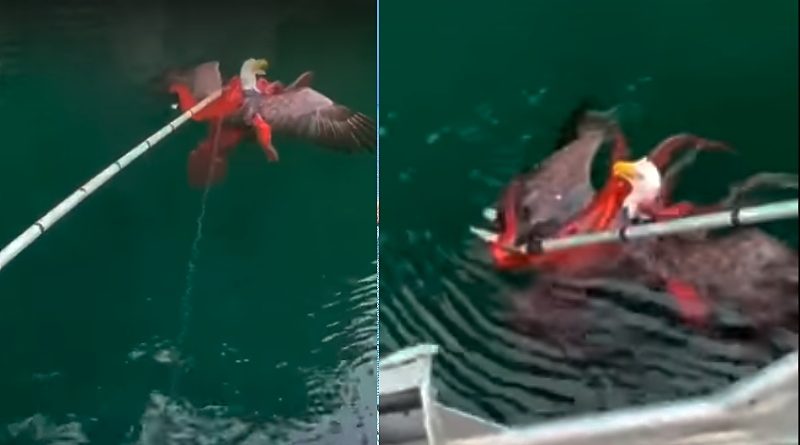 When you think of what natural enemies a bald eagle might have, I can almost guarantee you, no one came up with ‘octopus.’

Nature is weird, freaky, and sometimes just plain baffling, as is the case with this situation involving an eagle and an octopus.

Salmon farmers in Canada got a rare sight this week when they came across a bald eagle struggling to free itself from the grips of an octopus.

The incident happened Monday afternoon, as John Ilett and his coworkers were wrapping up work on the north side of Vancouver Island, British Columbia.

Ilett told CBC that they “heard a lot of screeching” and “splashing sounds” before they came upon the bird and cephalopod in the water, locked in combat.

“They were grappling and struggling in the water,” Illett said. “The thing dwarfed the eagle and completely wrapped it up.” 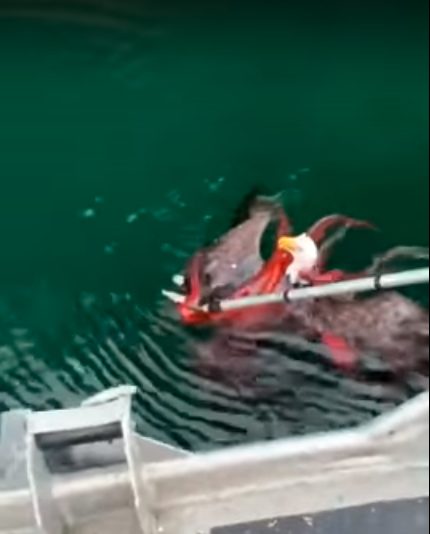 Illett told CNN that he didn’t see how the two animals ended up in that position, but bets that the bald eagle tried to swoop down and grab the octopus before realizing just how big it was.

He said that he and the crew were unsure whether to wade into the matter at first, but eventually felt so bad for the bird that they intervened.

“We weren’t sure if we should interfere because it is mother nature, survival of the fittest,” Ilett said. “But it was heart wrenching – to see this octopus was trying to drown this eagle.”

While someone shot video, another crew member grabbed a pole and helped pry the octopus’ tentacles off the bird so that it could eventually fly to a log nearby.

The octopus dove down in the water after losing its prey, while the bird flew off after about 10 minutes, Illet’s company, Mowi Canada West, said in a description of the video posted online Wednesday.

On release, the somewhat bewildered eagle made its way to shore and sat recovering for some time. The octopus, presumably a little irritated having had to relinquish its lunch, hung around near the surface for a while before sinking back into the depths.

Attacks by octopuses on birds are unusual, although some way off being unprecedented. This is presumably because the two creatures rarely cross paths, although opportunistic octopuses have previously been recorded preying on gulls and other marine bird species.

Now that’s not something you see every day!