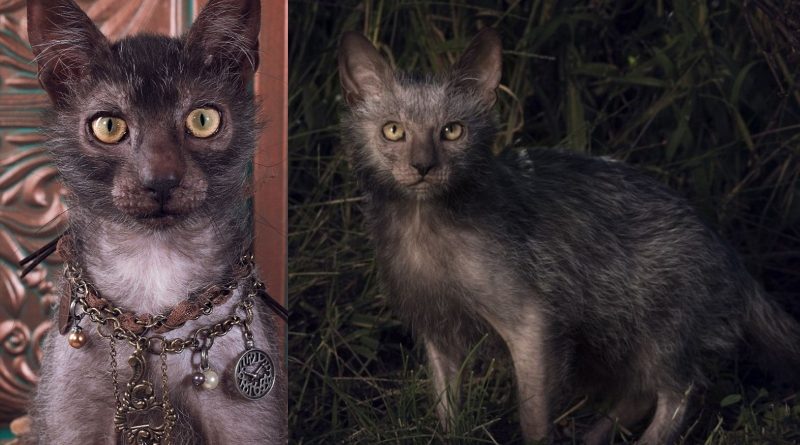 Even if you don’t like cats, you’ll likely fall in love with these kitties dubbed ‘werewolf cats’ due to their wolf-like appearance and mannerisms.

Lykoi cats get their freaky appearance from a natural mutation in a domestic shorthair that gives the felines werewolf features and prevents them from growing a full coat of fur, giving them the appearance of a scruffy-looking little wolf. But they don’t just look like little werewolves, they are also said to act like dogs too.

Lykoi, which comes from the Greek word for wolf, are a fairly recent breed of cat that first appeared in 2010 and were bred by veterinarian Johnny Gobble and his wife Brittney. They are now the primary breeders of the cat.

Our founding cats come from two unrelated litters,’ he explained. ‘The first litter was presented to Patti as a natural occurring Sphynx mutation. 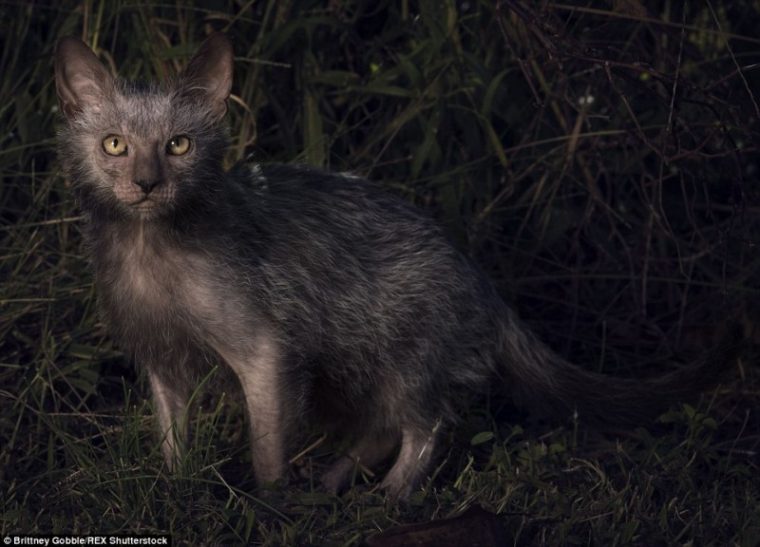 ‘The mother was a black domestic shorthair. Upon receiving the kittens, a brother, sister, and their mother, she knew they were not Sphynx. This confirmation was done with DNA testing for Devon/Sphynx gene which the kittens did not have.

‘The Lykoi Cat’s name was the inspiration of Patti. She said Lykoi was the Greek word for wolf, and we all thought it was very fitting – “wolf cat”.’ 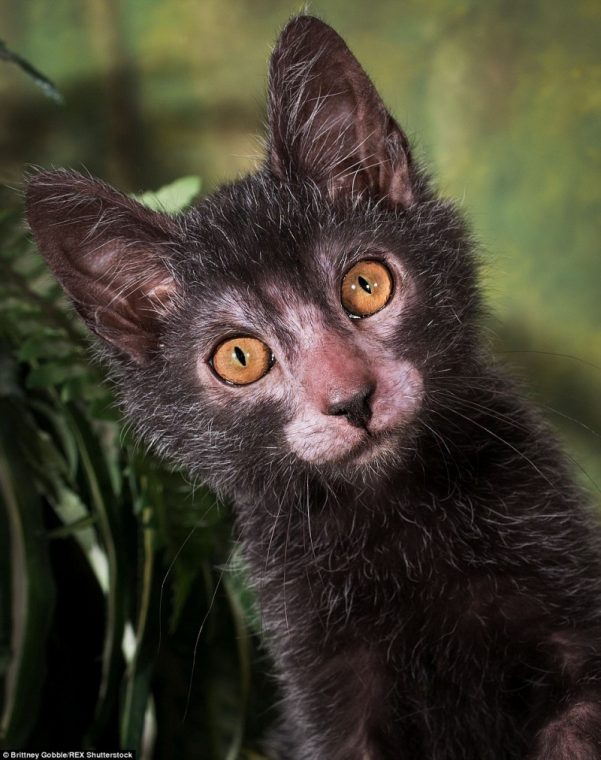 The animal has no hair around its eyes, nose, ears and muzzle, but has a consistently patchy coat of fur on the rest of its body.

Because of a naturally occurring mutation found in black domestic shorthairs, Lykoi cats have no hair around the eyes, nose, ears and muzzle and go through periods of patchy hair throughout their lives. The mutation prevents the cat from developing an undercoat and growing a full coat of hair. 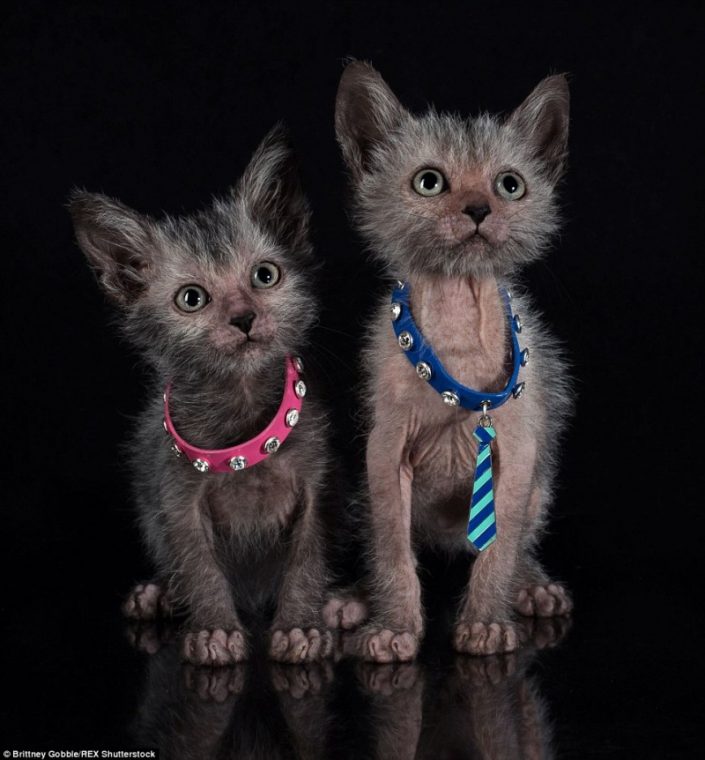 To ensure that their feral appearance was the cause of natural genetics and not a skin abnormality or disease, Gobbles put the breed through multiple skin, hair and DNA tests that were conducted by cardiologists and dermatologists at the University of Tennessee.

‘Our cardiologist also performed cardiac scans to look for any structural problems with the hearts. In the end, we found that the cats are healthy and the hair pattern is not from any known disease or disorder.

‘It was determined that it was indeed a true natural mutation and the Lykoi breeding program began On September 14th, 2011 we welcomed the first kitten from a Lykoi to Lykoi Cat breeding.’ 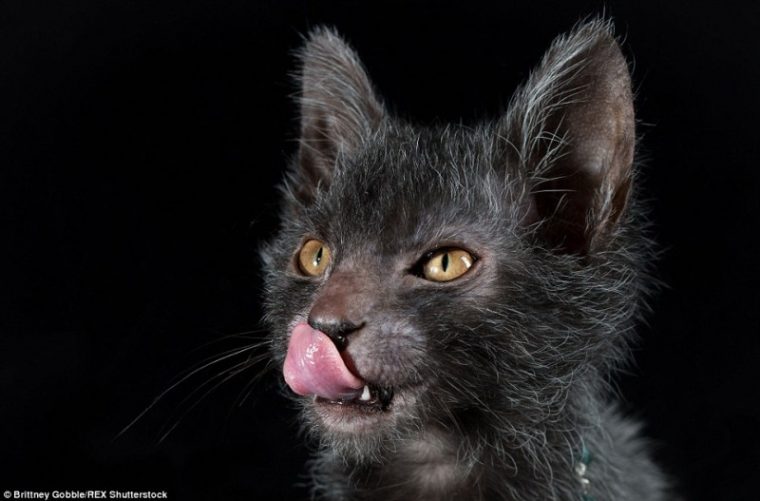 They are described as having a ‘hound dog personality’ as they like to hunt around the house for whatever they can find.

Like dogs, Lykoi are scent motivated and very intelligent.

According to Gobble’s website, Lykoi cats are “aware of everything around them” and may initially be cautious to new owners but warm up quickly to become loyal and affectionate companions.

Gobble explained: “They can be clingy at times, but generally if you are too busy to snuggle, they will take ‘no’ as an answer and will go on and amuse themselves … as long as they are close enough to keep an eye on you.” 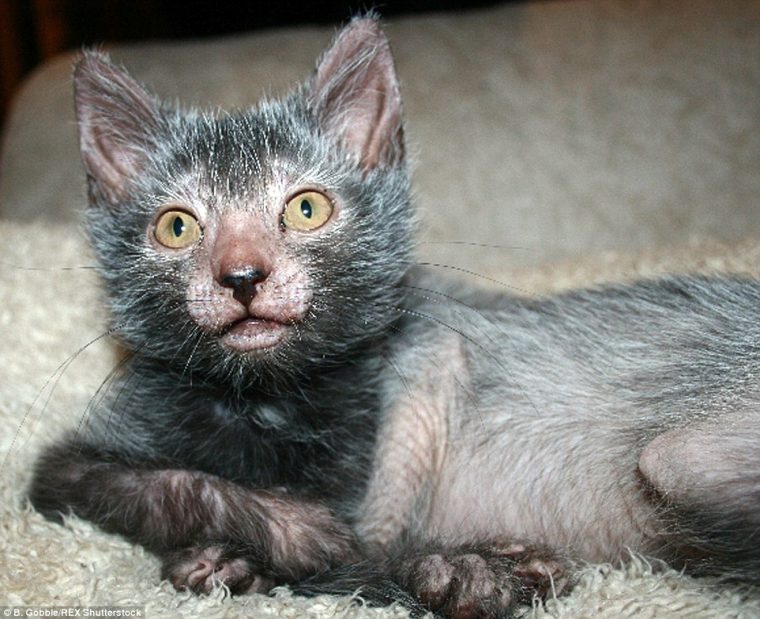 There are currently only 32 show standard Lykoi and 22 non-standard colored Lykoi in the world. There are also only seven registered breeders in the world.