If you are anything like me, you are amazed at some of the things Mother Nature comes up with. Like this weird, yet incredible, mushroom.

Scientifically known as hydnellum peckii, it’s called the bleeding tooth fungus because it has a thick red fluid which oozes through its tiny pores, creating the appearance of blood.

This fungus was first documented and named in 1913 by Howard James Banker, an American Mycologist (a scientific discipline concerned with the study of fungi.)  As the Associate Editor of the journal Mycologia, Banker was an avid student of the toothed-types of fungi.  He frequently could be found doing field research across the country and was credited with several other discoveries in addition to this find.

Spotted in Europe and North America’s Pacific Northwest, the bleeding tooth fungus mainly resides among moss and pine needle litter in coniferous forests. There have been other sightings in Europe, Korea, and the Middle East, but in all cases those have been quite rare. 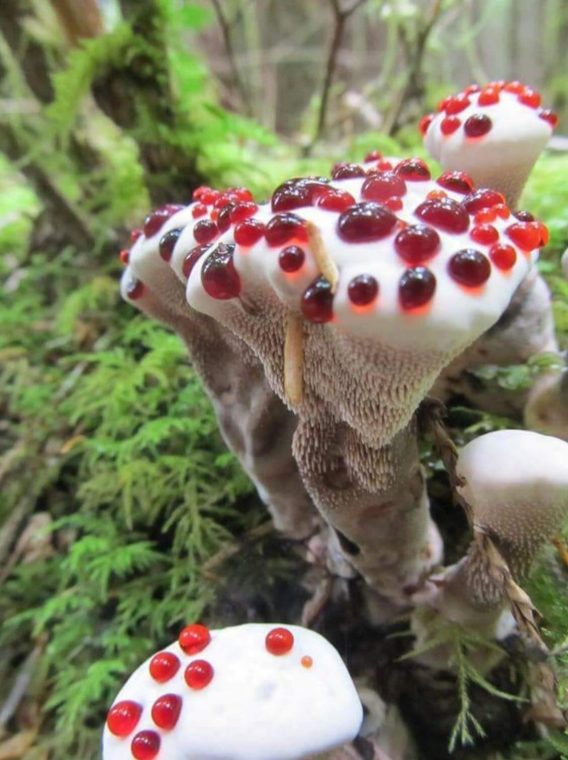 Often times, the fungus growth will be embedded with other plants or debris from the forest floor, making it quite difficult to spot by fungi researchers.  It is almost always found in close quarters to pine trees, as it has a symbiotic relationship with the trees roots.  This type of relationship happens between fungi and plant roots in about 2% of all plant species.  This relationship is quite complex and it’s known as Ectomycorrhiza. The fungus receives fixed carbon from the host and, in return, improves the host plant’s mineral absorption. 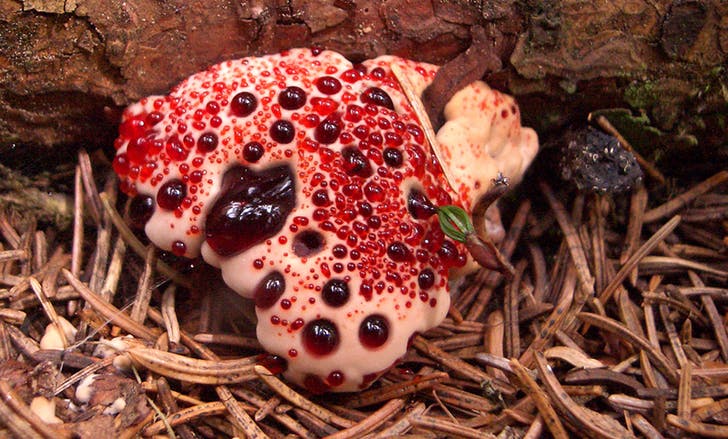 The fungus caps range from an inch up to four inches across when fully developed.  They are semi-round but often oval or multi-lobed shaped.  They are bumpy textured and the cap can be a pinkish-red or white, but almost always fades to white at the edges in the spring, and will eventually become brown in the fall.  What gives the Bleeding Tooth fungus it’s common name and it’s reputation as being unique are the red liquid droplets which exude from the cap.

While young and moist, the tough flesh of the cap “bleeds” a bright red sap-like fluid.  This red sap emerges from the fungus because of high root pressure, something known as guttation.  As the fungus ages, this pressure eases and the Bleeding Tooth fungus stops bleeding and eventually turns brown.

Despite its horrific appearance, the mushroom isn’t poisonous. We still wouldn’t recommend eating it – the taste has been described as very bitter pepper.

The mushroom contains atromentin, a chemical with effective antibacterial and anticoagulant properties. The colourful pigments are also used to dye fabrics. Chefs use the dye from the fungus to get the colors beige, blue or green.