What would you do if you woke up and found a massive bear in your closet? One family found out how they would respond:

A family in Missoula woke up to find an unexpected visitor snoozing in their closet – a black bear! Deputies of the Missoula County Sheriff’s Office responded to an early-morning call about a black bear found sleeping in a family’s home recently.

The black bear had “opened the door to the mudroom of this residence and somehow managed to deadbolt the door from inside,” the sheriff’s office explained in a Facebook post. “After being unable to leave, the bear began ripping the room apart but then decided he was tired and climbed up into the closet for a nap.”

That’s how the deputies found him – perched on a shelf, sleeping. Looks pretty cozy, doesn’t he? 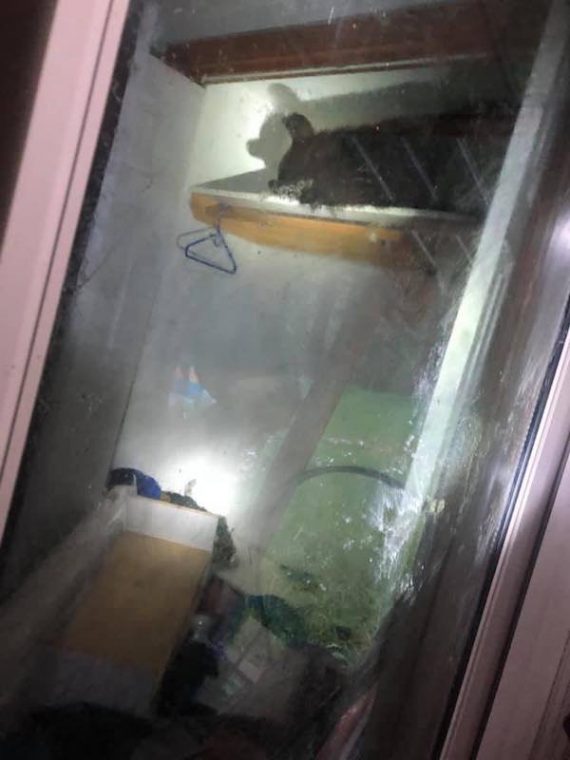 “When deputies knocked on the window, the bear was not the least bit impressed. He slowly stretched, yawned and, unamused, looked toward the door,” they went on to describe. Undeterred, the deputies attempted to get the bear to leave on his own volition.

“Eventually, deputies were able to unlock the door in hopes he would hop down and leave,” the post went on to describe. “However, their attempts were only met with more big bear yawns.”

If you want to know what this whole scene looked like, Here’s a video of the bear in the closet.

It seemed the bear was in no hurry to leave. So deputies took the next step. Montana Fish, Wildlife and Parks came and assisted, tranquilizing the bear so he could be relocated. He got a much longer nap than he probably was planning on taking but it was for the best.

The sheriff’s office shared that “The homeowners were glad he was removed in good health, but won’t soon forget when this intruder came looking for the bear necessities!”

They also encouraged people to lock their doors, joking the bear visitor was a bit like Goldilocks. “This is another good reason to lock up, as we also have unconfirmed reports that he tried two other closets before he decided this one was juuuuuust right (kidding)! But seriously, lock up!”