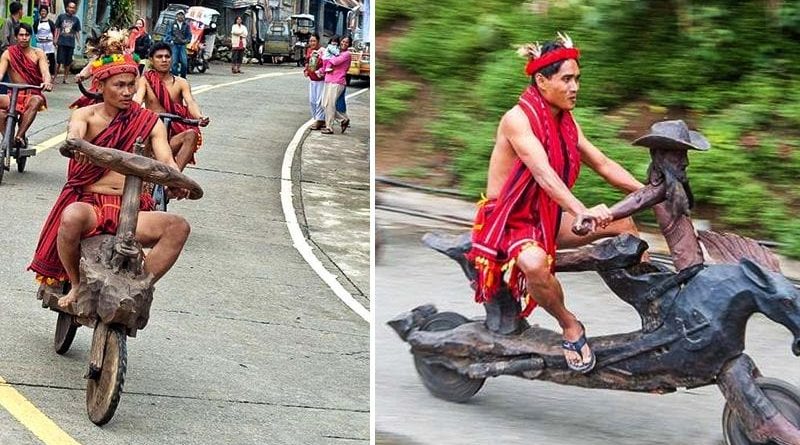 An Aborigine tribe in the Philippines is making headlines for designing and riding ornately carved bikes made from wood.

An Aborigine tribe in the Philippines is making headlines for designing and riding ornately carved bikes made from wood. Though the beautiful bikes were created out of desire and necessity, as few Igolot-Garonne tribe members can afford a conventionally-made bicycle, people around the world are expressing a preference for the carved bike.

Photographs of the unique bicycles were captured by photographer Richard Haw. Reportedly, the Japanese resident and his wife were in the Philippines on business when the unconventional “motorcycle” gang pulled into the town of Batad. Said Haw, who works for a games company:

“I was walking to my truck in the town when we were treated to the spectacle and it just so happens that I had my camera on hand and snapped the cowboy inspired scooter zooming downhill. Owning a motorcycle is considered a status symbol for people of a humble background. Since most of them do not really earn enough to afford the real thing they would just make imitations of scooters by whatever means they have.” 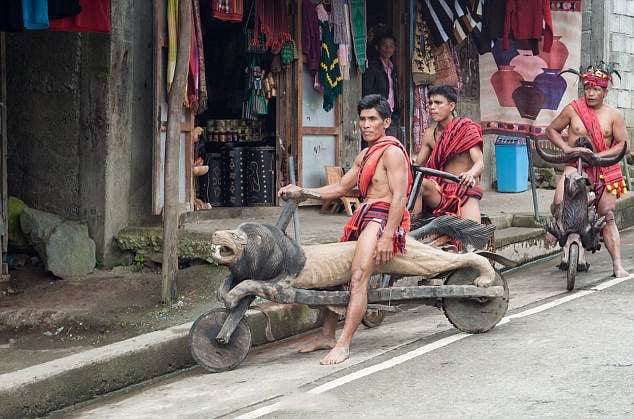 As you’ll notice from the photographs, the wooden bikes are an opportunity for the tribe members to show off their excellent wood-carving skills. Many of the two-wheelers feature an animal theme, such as the head of a horse, dragon, lion, etc… With their sturdy bikes, tribesman can participate in their very own road races. 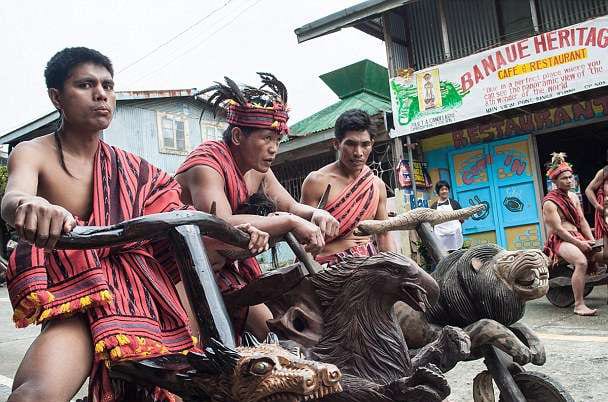 The bicycles can reach speeds of up to 25 mph as they race each other downhill. Unlike cyclists in bustling cities, the aborigine riders do not wear any protective gear or helmets. Instead, they race freely in their traditional highlander g-string, called a bahag, and a dyed red robe. Their attire distinguishes which tribe they belong to. “I have not heard of any fatalities or accidents while people have been using the bikes, but looking at their legs you can see deep scars and I can imagine that it might have come from this,” said Haw.

To slow down the bike, the tribesmen step on a wooden pedal. This action puts pressure on a piece of thick, recycled tire. The friction causes the scooter to slow down; then, their feet do the rest. Haw’s wife, Elaine, is part Igorot. 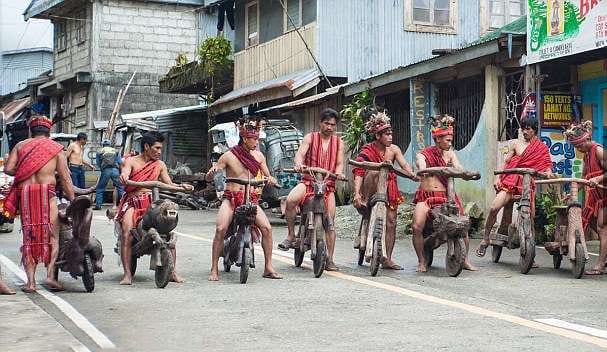 She commented, “When they race through the town, it is a chance to show off their scooters which is a source of pride for the carver.”

Reportedly, the tribe is part of a larger group of mountain tribes, all referred to as the Igolot (or Irorot). They inhabit the island of Luzon, the largest in the Philippines. According to Pixelated Planet, the craftsmen happily share their creation with the rest of the village. Sometimes, they dress up in traditional costume before riding together. 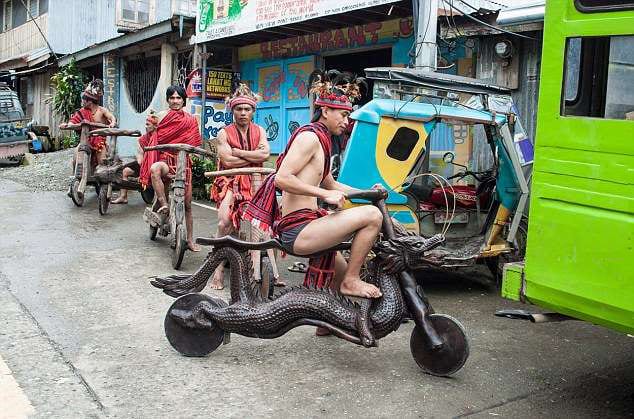 The Igolot believe that their gods reside in natural objects, such as trees and mountains. By carving ornate designs into their bikes, they show their respect for all. Unfortunately, the aborigine tribe is struggling against oppression to remain on their indigenous land. In an attempt to fight back, the Igolot tribe is pushing to be recognized as a self-governed people so they can benefit from the resources that are plentiful in the mountains they inhabit.

This article was written by Mandy Froelich for TheMindUnleashed