A city in India held a wedding ceremony for Varuna and Varsha, 2 frogs, with the hopes of rainfall in the country who is currently gripped with drought.

Hundreds of guests were seen attending the marriage of the two frogs in the city. The wedding ceremony of frogs is called “Mandooka Parinaya” which is held to please the rain gods.

Last month, New Delhi, the capital city of India, recorded its highest temperature ever of 48C, and Churu, Rajasthan recorded 51C. The heatwave in India has caused the death of around 36 people, so the idea was to marry these two frogs in a beautiful ceremony.

Varuna and Varsha, the two frogs, were married in the Udupi City of Karnataka.

According to the Times of India, a group of frogs were first caught in two different areas of the city and were inspected by the Department of Zoology in Manipal.

This is when Varuna and Varsha were selected.

They were named after the god of water and the rainy season.

Varuna and Varsha rode a tricycle when they were brought to the hotel for their wedding ceremony. They were seen wearing custom-made outfits.

To show that this was a true marriage celebration, all traditions were upheld. Even the female frog wore a toe ring. 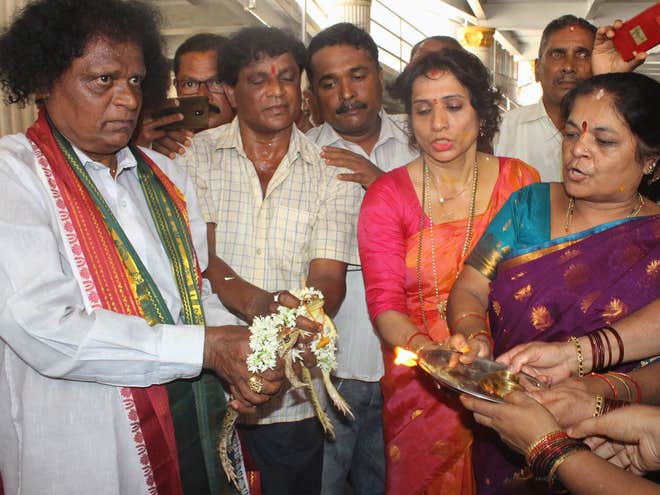 Varuna and Varsha also went on their “Honeymoon” which is going to be in mannapalla, a village near Manipal.

Varuna and Varsha will be released in the same village.

More than 100 people received invitation cards for the one-of-a-kind event and after the ceremony, food was served to the guests. Now that the frogs have been wed, they will go on a honeymoon in Mannapall, a village near Manipal. There, they will be released back into the wild.

Though the ceremony may be perceived as unconventional or odd, it brought peace to those who are currently affected by the blistering heat. In this sense, there is much to celebrate about the union of these two frogs.

What do you think about this story? If you enjoyed it as much as we did, be sure to share it with your friends!