A study reveals that the colour changers can also glow in the dark under ultraviolet light.

Chameleons are colour-changing, tongue-whipping, eye-rolling lizards. But did you know they also glow in the dark?

A new study published in the journal Scientific Reports revealed just that. It’s the first time researchers have reported bone-based fluorescence in vertebrates.

The proteins, pigments, and other materials that make up bones help them to glow under ultraviolet light—just think of how your florescent smile lights up under a black light. We’ve known that 75 percent of deep-sea creatures can glow in the dark, so this light-emitting characteristic is common in marine species.

But biogenic fluorescence is rare in terrestrial vertebrates. Only in March was the first fluorescent frog discovered in the Amazon. 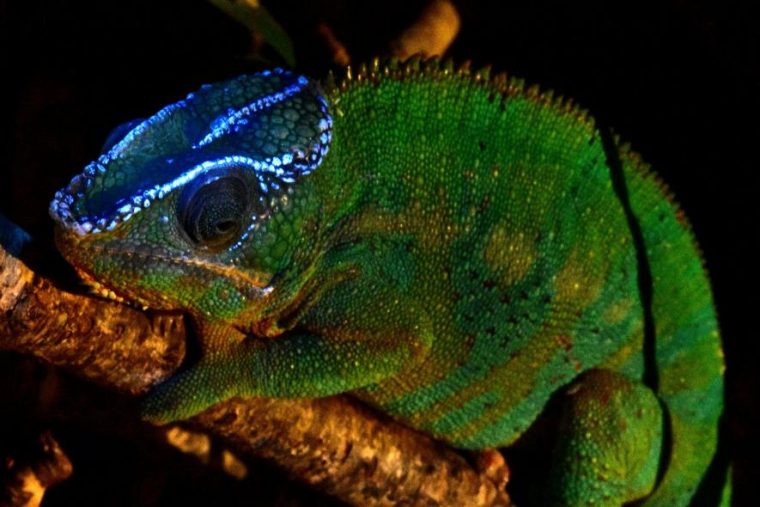 Last year, a team of German researchers published a paper showing that the bones of chameleons glow under UV light. They tested the light rays on 160 specimens that spanned 31 species of Calumma chameleons, which are endemic to Madagascar. Micro-CT scans revealed that a bright blue glow emanated from the lizards’ skeletons and shined through their skin.

Tubercles, or small, rounded, bony projections, dot the faces of chameleons. The lizards also have four layers of thin skin, which have different pigments to help them change colour. When the scientists shined a UV light over the chameleons, the glowing tubercles shined out from their skulls and through their skin.

“We could hardly believe our eyes when we illuminated the chameleons in our collection with a UV lamp,” lead author David Prötzel, a doctoral student at the Bavarian State Collection of Zoology, says in a statement. “And almost all species showed blue, previously invisible patterns on the head, some even over the whole body.” 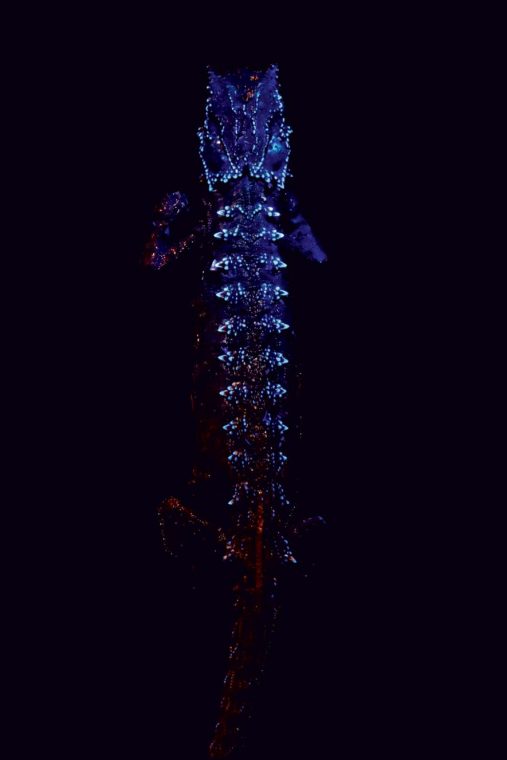 The scientists said the gaps where the tubercles peaked through the skin were “windows” that helped UV rays reach the bone and get absorbed.

For chameleons, the glow likely shines brighter than it does for humans. Blue is a rare colour in the lizards’ forested habitats, so glowing in the dark would make them stand out from their green and brown backdrop.

Chameleons can change colour depending on a lot of factors. A shift in mood, perhaps triggered by fear or anger, can cause them to shift shades, as well as varying temperature, humidity, and amounts of light. Males will sometimes make themselves brighter in order to attract females and establish dominance; more submissive shades are brown and gray. A change in colour can also show if females are accepting or rejecting male partners, or it can indicate pregnancy.

But chameleons can’t change to any colour they want, and they can’t exactly mimic their environment. A lizard on a striped or polka dotted background won’t be able to adopt that funky pattern.

Instead, species have a certain array of patterns and colors they can take on. Nerve impulses and hormone shifts can cause their skin to expand or shrink and blend different layers for different colors and patterns.

Scientists aren’t quite sure yet why chameleon bones glow in the dark. Since glowing tubercle patterns vary among species, the trait could help them recognize members of the same species. The researchers also found that males have more tubercles than females, a sexually dimorphic characteristic that could indicate when chameleons are ready to mate.

The glow-in-the-dark trait could also be used to protect chameleons against excessive sunlight, hide them from UV light detection, attract pollinators, or scare off predators. But ultimately, even more glowing land animals might be waiting to be discovered.