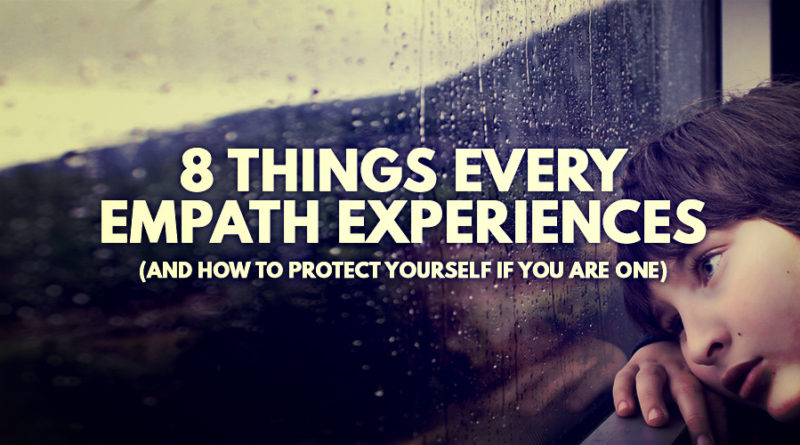 The empath has a trademark characteristic: they feel and absorb other people’s emotions or physical ailments due to their high sensitivities. They are the ones who filter the entire world through their intuition, and appear to have difficulty putting their feelings into words.

As an empath myself, I am aware of the multiple challenges that highly sensitive people face on a daily basis. In fact, when they become overwhelmed with the heavy burden of stressful emotions, an empath might experience panic attacks, depression, exhaustion, food or drinking binges or many other symptoms that lack reasonable explanation. To someone who doesn’t share the same heightened sensitivity as them, these symptoms might not make sense.

However, being an empath doesn’t mean they have to unnecessarily tax their circuits all the time. Empaths can learn ways to center themselves so that they don’t feel too much or become overloaded with emotions. The first step is acknowledgment. Acknowledge that yes, you are an empath, then go from there.

HERE ARE 8 THINGS EVERY EMPATH EXPERIENCES, AS WELL AS SOME HELPFUL TIPS ON HOW TO PROTECT YOURSELF FROM BECOMING EASILY OVERWHELMED:

Empaths are spiritually open-minded, great listeners, and give all of themselves to others. They are excellent nurturers because of their huge hearts. This is one reason they can easily have their feelings hurt. Empaths often hear that they are “too sensitive” and need to “toughen up.”

Empaths are highly perceptive to the way in which other people feel- good and bad.  When I say they feel everything, they really feel everything. Your mood becomes their mood. When negative emotions such as anger or fear are prominent in others, they take them on as their own, which can be exhausting for them. If they are around positive influences, like peace and love for example, their bodies take these on and flourish.

For those who experience the world through their intuition, developing that skill is exceedingly important. Listening to their gut feelings about people helps empaths to find positive relationships and avoid energy vampires.

4. BEING TARGETS FOR ENERGY VAMPIRES

An energy vampire is someone whose negative emotions, like fear or rage, can sap the life and peace of mind from another person. Empaths are easy targets for them because of their heightened sensitivity. However, it’s not just physical energy that becomes drained by these vampires. There are certain dangerous ones, narcissists for example, who can twist an empath’s reality and make them believe they’re unworthy and unlovable. Other types of energy vampires include The Constant Victim, The Chronic Competitor, The Drama Queen and more.

Obviously, being an emotional sponge can be tiring. Because of this, empaths need alone time to recharge and recenter. Even a momentary break away from people can prevent emotional overload.

When the constant busyness of everyday life becomes too much for an empath, they seek nourishment and solace in nature. Being in the company of trees, wildlife, gardens, oceans and beaches restores their energy and helps them to release their burdens.

It’s not just emotions and energy which empaths are sensitive to. They can become frazzled by certain noises, smells, and sounds as well.

8. HAVING A HUGE HEART AND MAYBE GIVING TOO MUCH

Empaths have huge hearts, and when they see someone suffering, they try to relieve their pain. Whether it is a homeless person on the street, a sad child, or a distraught friend, it’s natural for an empath to want to reach out and ease their pain. But they don’t stop there. Instead, they take those feelings on—suddenly they’re the one who is feeling drained or upset when they were feeling fine before.

As an empath myself, I consider several strategies when it comes to protecting my sensitive nature. A few which I have found to be most beneficial are: fierce time management, set limits and boundaries with people who drain your energy, meditation to calm and recenter, and spending time in nature. I find that being an empath is a remarkable gift, but it requires that you take care of yourself. Empaths are special individuals, and therefore have special needs. If you are an empath, it’s vital that you honour your needs and communicate them to your loved ones.